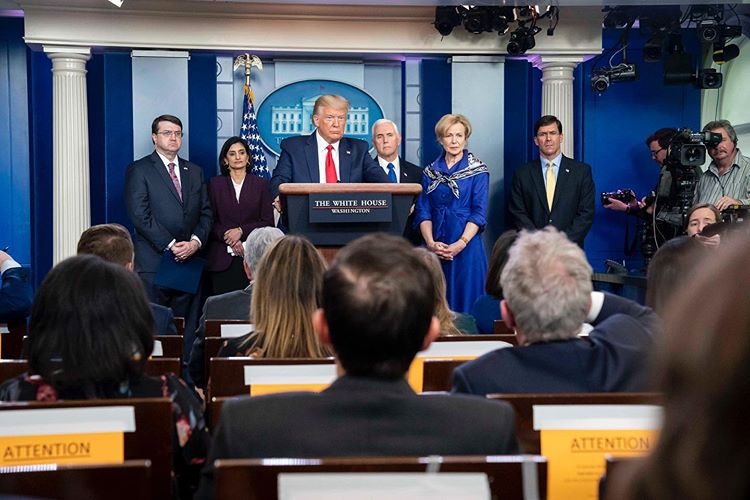 The mainstream press grilled President Donald Trump on the name of this current Pandemic. The press—almost as if it were taking orders from the Central Committee of the Chinese Communist Party—went after the President for telling the truth. COVID-19 is a Chinese virus.

This virus began, despite Chinese propaganda, in China. (The AFP reported a Chinese diplomat blamed the US for the virus.)

Its origin was Wuhan. That’s located in the Hubei Province of China.

Just like the countless other diseases were named for their point of origin, (Spanish Flu anyone?), President Donald Trump has good reasons to call it a Chinese Virus.

But, the press doesn’t like it. CNN declared Trump was “malicious” for using the term.

In one video a visibly distraught reporter asks the president, “Why do you keep calling this the ‘Chinese Virus?’ There are reports of dozens of incidents of bias against Chinese-Americans in this country…Why do you keep using this?”

Accurate is not appreciated by the mainstream press. But are we shocked?

Even reasonable policies to protect Americans from the introduction of disease are condemned. Travel restrictions are racist. In fact, that’s what The Nation writes—that xenophobia fuels border controls. The Atlantic alleges—that racism is spreading with the Pandemic.

And trying to protect Americans from terrorists is racist too. The New York Times published in a February 4 article: The Racism at the Heart of Trump’s ‘Travel Ban.’

However, it is widely known that travel poses health risks. Immigrants, refugees, business travel and vacation trips all increase American’s exposure to dangerous disease. With unrestricted immigration during the 2000s, we saw a surge in new cases of once eradicated diseases.

But those facts are no doubt racist too.

Undermining truth is the post-modern playbook. When the Elites in the press see President Trump winning, they resort to cries of racism.

There is another play in that Elite Playbook.

Locking down Americans is fine. In fact, it is encouraged.

Locking out foreigners is bad. In fact, it is racist.

This is why Donald Trump was elected President.

This is the very thing KT McFarland said in her new book. She writes of Trump’s election, “But most of all it’s been because for nearly twenty years we have pursued economic and foreign policies that worked well for some of our people but failed miserably for others. It didn’t matter whether the Republicans or the Democrats were in charge in Washington. The average, hardworking ‘commoners’ turned to Trump because they felt either ignored or ill-treated by everybody else.”

Is there a better example of the continued detachment of the globalist elite than a willingness to lockdown Americans and refusal to lockout foreigners?

That’s the question discerning Americans should be asking right now and headed into the 2020 Presidential Election.

One candidate, Donald Trump, will do whatever it takes to protect Americans. The other candidate, an advocate for the globalist elites, won’t. He’ll return Washington to the process of putting Globalists ahead of the Little People. Biden is notorious for advancing China’s agenda. He and his family have close business ties with the totalitarian regime. Biden famously said the totalitarian Communist regime weren’t “Bad folks.”

We can’t afford that.

We need someone willing to stand up for the American people.