If the SBC Elites who promote Woke Social Justice also promote Albert Mohler, then what does that tell you about Albert Mohler? He will continue the leftward slide of the SBC.

Should Southern Baptists tolerate those paid by the Convention to tamper with the political process?

The 2020 Southern Baptist Convention presidential race will determine if the SBC stands conservative or continues its leftward slide into Woke Social Justice Never Trumpism. We warned you about what would happen if the SBC picked a progressive like J.D. Greear. And Greear did not disappoint with his advocacy of pronoun hospitality and declarations that it is “great” if a Christian were to vote for a Democrat.

Now the same SBC Elites who openly campaigned for Greear in 2018 are doing it again. This time for Dr. Mohler.

Dr. Daniel Akin, head of the Woke Southeastern Baptist Theological Seminary (SEBTS) and ground zero of the Social Justice infiltration of the SBC, tweeted: “I can think of no one more qualified and prepared to lead Southern Baptist during these critical days. He will build on the excellent work of president @jdgreear. My dear friend and brother has my prayers and support. If elected, he will lead us very well.”

I can think of no one more qualified and prepared to lead Southern Baptist during these critical days. He will build on the excellent work of president @jdgreear. My dear friend and brother has my prayers and support. If elected, he will lead us very well. https://t.co/hoxF9trybS

Dr. Mohler probably doesn’t want to be too closely tied to the Greear presidency.

Can you imagine Mohler making the pronoun hospitality error? Or, claiming as Greear, that Christians and Muslims worship the same God? 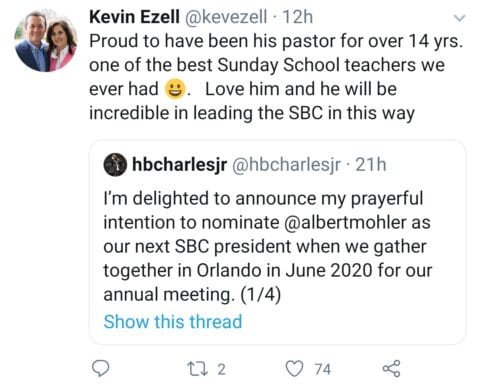 Back in 2018, Russell Moore and Albert Mohler along with Akin were using their social media platforms to promote Greear.

As we said then, Al Mohler, president of the Southern Baptist Theological Seminary, tweeted as if the election were already decided: “Thankful to see that @jdgreear will allow his nomination as SBC president in June. He will lead us well with Great Commission passion and vision. Incredibly gifted leader.”

Russell Moore, president of the Ethics and Religious Liberty Commission of the Southern Baptist Convention, offered little more than a campaign message: “Very good news. @jdgreear is one of the most impressively missions-focused, evangelistic, and godly leaders I’ve ever known.”

“Why then should any head of an entity seize the opportunity any given year for public participation, aside from voting as a messenger, in the election of our SBC officers? To do so risks much good will and enormous respect normally gained over many years by individuals who have been elected to lead entities of the Southern Baptist Convention,” Chapman warned. “When a president of an entity publicly endorses a potential nominee or nominates a candidate for elected office, he potentially alienates some who otherwise hold him in high esteem because they differ with the person he has embraced publicly for an elected office. Consequently, the entity head endangers his potential to provide effective counsel and spiritual leadership to the larger body of Southern Baptists although their beliefs may coincide with the entity head on most other issues…

And a reminder of how bad this entire process looks—many of the SBC leaders cheerleading Mohler’s nomination are protégées. As this  map helpfully details: 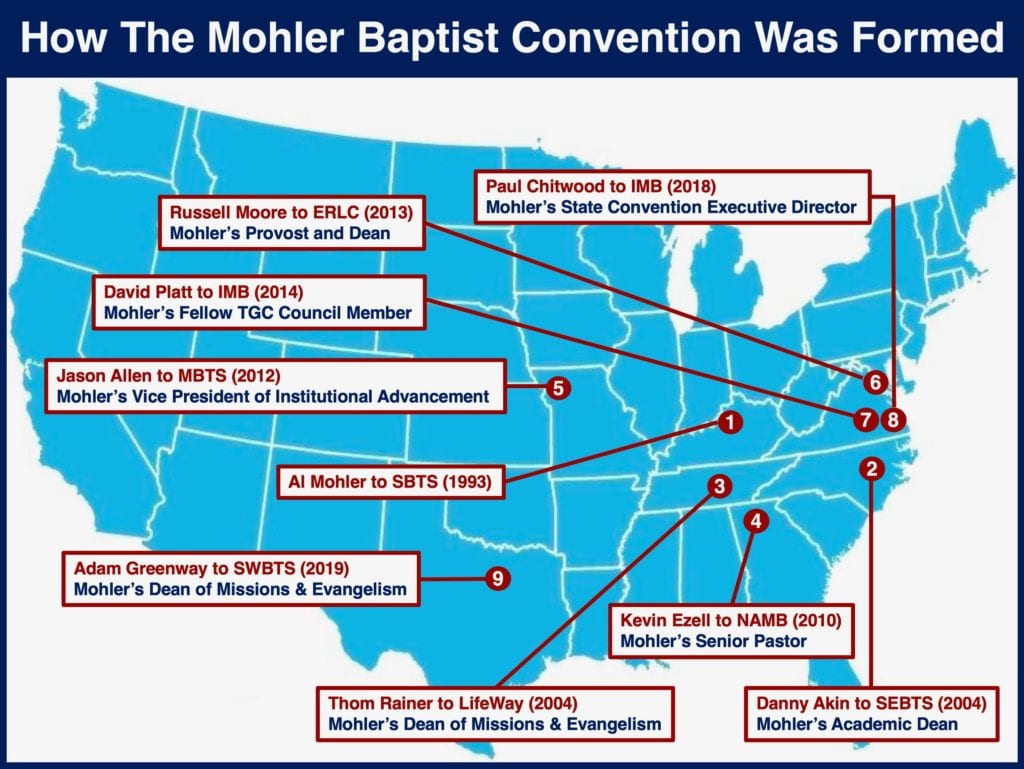