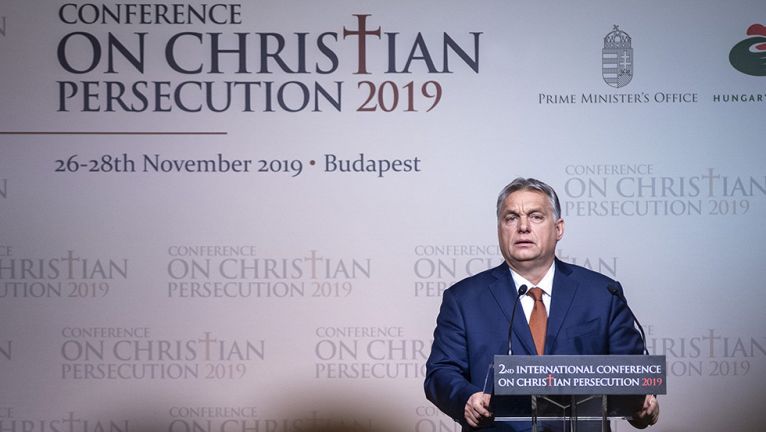 Not since the Calvinist William of Orange united a diverse coalition to save the liberties of Europe from the overreaching aggression of Louis XIV has a Calvinist politician attempted to shape the world order like Viktor Orbán. Orbán, the Prime Minister of Hungary, is a leader unafraid of his nation’s Christianity, He loves his people and their history. That is why he is a trailblazer in the rediscovery of nationalism in the West.

Naturally, Orbán’s ideas cause the global elite discomfort. He challenges the orthodoxy of this secular age.

He speaks about the connection of Christianity with Hungary’s long history. A powerful example of Orbán’s view came during a conference on Christian Persecution, where Orbán outlined Hungary’s faith and how it shapes its view of nationhood:

To understand Viktor Orbán one must understand his historical conception. History shows Hungary experiencing aggression from the Soviets to the Ottomans to the Habsburgs. Is it any wonder that its people would prefer their own national identity?

The History Gap in American foreign policy is serious. Henry Kissinger stressed the importance of historical understanding to foreign policy. Niall Ferguson quoted Kissinger as saying, “No significant conclusions are possible in the study of foreign affairs—the study of states acting as units—without an awareness of the historical context.” And the biographer reinforces Kissinger’s point by another quote: “But in reality a people defines its identity ‘through the consciousness of a common history. . . . History is the memory of states.”[1]

Applying that to a specific case, Kissinger noted as Ferguson quotes: “The statesman cannot choose his policies as if all courses were equally open. As a multi-national state, Austria could not fight a national war; as a financially exhausted state, it could not fight a long war.[2]

Orbán knows Hungary’s history, its people and its resources. And its people are religious.

So is Viktor Orbán.

Orbán is a member of the Calvinist Hungarian Reformed Church. The denomination is the largest Protestant group in Hungary and has its origins dating back to 1500s and the spread of the Reformation from Calvin’s Geneva and Luther’s Germany. Its doctrine is shaped by the Heidelberg Catechism and the Second Helvetic Confession. However, suspicion of the new “German Religion” made Hungary more open to Geneva. As the official church website explains:

“The Hungarian petty nobles were still suspicious about Lutheranism because of its German origins. This could be the reason why the Swiss wing of Reformation, especially Calvinism, was more favored and popular in Hungary than Lutheranism.”

Orbán’s faith is personal too. He recently met with Australian evangelist Nick Vujicic—and shared an image of both men praying together. Vujicic said, “Thank you Mr. Prime Minister @orbanviktor for meeting with me today and praying together for Hungary! Thank you for your welcome and I am overwhelmed by your courage and faith in God. I am excited to see what God has in plan for Hungary! Looking forward to preaching tonight in front of 12,000 people tonight in Budapest plus the online audience! God Bless you and God Bless Hungary!”

Orbán’s speech celebrating the 500th anniversary of the Reformation revealed the cornerstone of his political theology. He carefully separated the duties of the church from the duties of the state. He said, https://garydemar.com/hungarys-prime-ministers-speech-commemorating-500th-anniversary-reformation-will-inspire/

“We don’t confuse our calling with the mission of our churches. Our calling is to protect the ways of life that have their roots in Christianity. We defend human dignity, we defend families, we defend the nation, and we defend our faith communities. For us, this is not a mere task, but a duty and a calling which we must perform to the best of our abilities. We can see that the Hungarian people and Christian Europe are in need of spiritual and intellectual renewal.”

This religious motivation guides Orbán’s policies—much to the chagrin of Evangelical Elites and their globalist buddies.

And the conclusion of his speech triggers them even more. He said, “God save Hungary! Soli Deo gloria!”

There is a “God Gap” in contemporary politics. George R. Middleton writing in Providence explained,  “The ‘God gap’ references the conceptual gulf that opens up between a person—or nation—and their actions when we fail to account for the role religious belief plays in motivating their behavior.”  It is a serious problem in our understanding of foreign states. Hungary’s historical understanding was shaped as it stood at the intersection of the West and the Ottoman expansion into Europe.

Orbán seems to hold history up as a personal message for today’s Hungarian leaders. He said in a December speech:

“Our first Christian king was more than an outstanding ruler; he was also a prophet. He wrote a book, a set of guidelines, which would become a moral and political compass. Though he wrote it to his son a thousand years ago, we Hungarians read it as a personal message to us. And we believe that if we heed his words, if they form our solid ground, then we can build for ourselves a strong country, a flourishing culture, a loving home and a happy family…

“The Hungarian people and the Hungarian government believe that Christian virtues can lead those who exercise them to peace and happiness. This is why our Constitution states that ‘The protection of the constitutional identity and Christian culture of Hungary shall be an obligation of every organ of the State.’”

And the defense of Hungary’s Christian culture is the organizing mission of the state. Orbán declared:

“The starting-point for Hungarian policy is that we Christians have the right to defend our culture and the way of life that has grown from it, and that we are free to do this… And unlike politicians in many European countries, we believe that people must be encouraged to live and flourish in the lands in which their ancestors have lived for centuries. What we must help them to do is not to move away, but to stay in their homes. Therefore, through the ‘Hungary Helps’ program we’re financing the rebuilding of many schools, hospitals and homes in Iraq and Syria – in places where perhaps people had not even known of the existence of Hungary. We’re also helping many persecuted young Christians from the Middle East and Africa to study at universities in Hungary: young people who – due to their faith – could perhaps never gain admission to such institutions in their own countries.”

Viktor Orbán even created an entire ministry in 2016 to fight oppression of Christians in foreign lands.

And all this nationalism and Christianity does not please the cosmopolitan crowd.

Orbán is despised by the global elites. George Soros targets him. The prestigious journal Foreign Affairs placed Orbán in the same company of autocrats as Turkey’s R Recep Ergdogan, Russia’s Vladimir Putin, China’s Xi Jinping and the Philippines’ Rodrigo Duerte. In the September/October 2019 edition, it profiled Orbán among those others as one of the new wave of autocrats afflicting the world. The profile wasn’t flattering.

It attacked Orbán’s battle with billionaire George Soros. Foreign Affairs opined, “In a stomach-turning twist, the main target of these attacks has been his former patron, Soros. In recent years, Fidesz has blitzed the Hungarian public with anti-Semitic attacks on Soros, painting him as a behind-the-scenes manipulator bent on seeing his homeland overrun by migrants and refugees.”

Just as Soros is at work in the United States, Hungary has its own battles with Soros. George Soros “is the world’s number one oligarch.” And Orbán said, Soros “controls political activities via a mafia-like network and exerts influence on European politics.”

“We don’t have a Soros phobia,” Orbán said, “We are not fixated. But we confront a very strong group that is directed by George Soros,” and their goal is to influence the politics of the EU. “I consider, George Soros a talented, Hungarian man. That’s exactly the problem. I’m very sorry that he is not with us but against us.”

Viktor Orbán’s battle against global elites is not only political. It includes education.

“In an effort to restore curricular and administrative sanity to university education, Hungarian Prime Minister Viktor Orban and his Fidesz Party have passed legislation to abolish Gender Studies as an area of official study. Hungary’s Deputy Prime Minister Zsolt Semjen has stated that such programs “ha[ve] no business in universities” as they represent “an ideology, not a science,” with a market profile “close to zero.” Similarly, Orban’s Chief of staff Gergely Gulyas said, “The Hungarian government is of the clear view that people are born either men or women. They lead their lives the way they think best [and] the Hungarian state does not wish to spend public funds on education in this area.”

Orbán is set to speak at the God, Honor, Country: National Conservatism Conference February 4, 2020, in Rome. The conference is presented in part by the Edmond Burke Foundation and the Danube Institute. The focus of the conference is: President Ronald Reagan, Pope John Paul II, and the Freedom of Nations. The conference attempts to answer the question:

“Is the new national conservatism a menace or is it—on the contrary—a virtue?

“This international conference in Rome will seek to answer this question. It is John Paul II’s centennial year, and we will begin by revisiting the historic alliance between an American President and a Polish Pope that defeated Communism and succeeded in re-establishing national independence, self-determination, and religious freedom in Eastern Europe after 1989.”

Orbán has his own thoughts on political theology. He wants the state to strengthen the nations because that is how Christ is glorified. He said in a 2018 speech:

The preservation of nations is at the heart of the new National Conservatism movement. This focus on nations makes Viktor Orbán a critical voice at this moment of European history. Elites hate the local. Elites despise the average, God-fearing patriotic citizen.

But there is a rising tide of nationalism in Europe and the United States.

Viktor Orbán and similar politicians know this and are trying to harness this new political force to protect liberty and Western Civilization. And much of this political theology flows out of Orbán’s individual Christian faith.

“After all, everything truly important in life derives from grace,” Orbán said in a speech. He went further and attributed all the good that happened in Europe to Christianity. He said,

“For two thousand years every major renewal in Europe has derived from Christianity: from the edict of Constantine, through the Reformation, to the foundation of the European Union – a project originally rooted in Christianity. It is important to remind ourselves of this – and particularly important today.”

And the Prime Minister concluded this speech in familiar manner for Protestants: “Soli Deo gloria!”

What Orbán is doing in Hungary ripples in many nations. This Calvinist and his political theology are shaking the foundation of the global elites. American Evangelicals should take note. They are not alone in the struggle against those who wish to destroy Western Civilization and Christianity.