Gideon tweeted, “I know I have been ‘retired’ from twitter for the past couple of years, but I am returning to announce something that I believe is important. I, along with others, are announcing our intention to nominate @ERandyAdams1 for President of the SBC in Orlando at #SBC20.”

Adams responded on Twitter. He tweeted, “I’m thankful for the people who intend to nominate me as SBC President in Orlando 2020.  With gratitude I accept their intent to nominate me.  I understand the challenges ahead, and I’ve written a document describing my commitment to the SBC.”

I look for to conversations as to how the SBC can best move forward in the advancing the Great Commission. @baptistpress @NWBaptist @Blake_Gideon

Adams’ website provides his biography and a list of priorities for the Southern Baptist Convention. You should read all seven priorities, but this one seems important:

“Operate in the Light – The SBC should be the toughest place to hide corruption, abuse, and poor stewardship, operating at the highest level of integrity and accountability. We must eliminate organizational tools, structures and processes that help hide wrongdoing and abuse. The SBC and its entities should end the use of, and recall, all remaining Non-Disclosure Agreements (NDAs). We must not hide corruption and we will not protect predators at the cost of harming victims. There must be transparency in how we make decisions and how we spend money. Records should be open. Property purchases and ownership should be disclosed and records made available. Annual audits of entities should be open and accessible to Southern Baptist constituents. If we choose to operate in the light, we will maximize the trust and goodwill that are essential to maximizing the Great Commission cooperation of Southern Baptists. Transparency and frank communication regarding challenges and opportunities will build trust and unity in the SBC.”

Here is an image of the announcement letter: 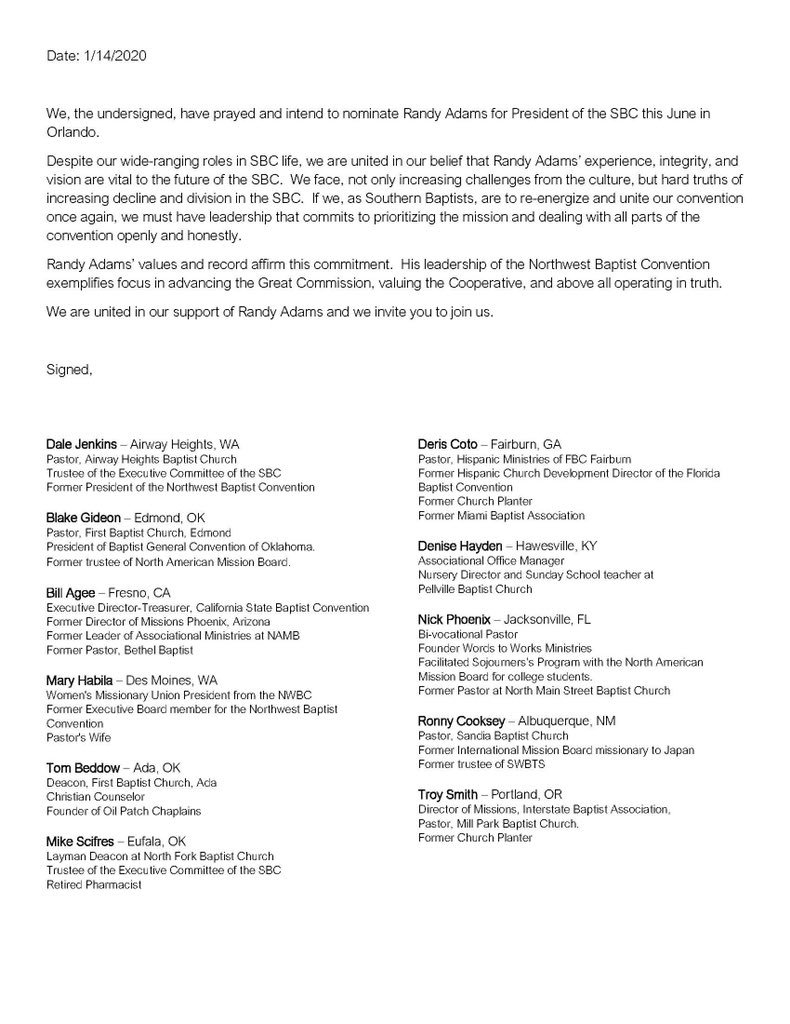