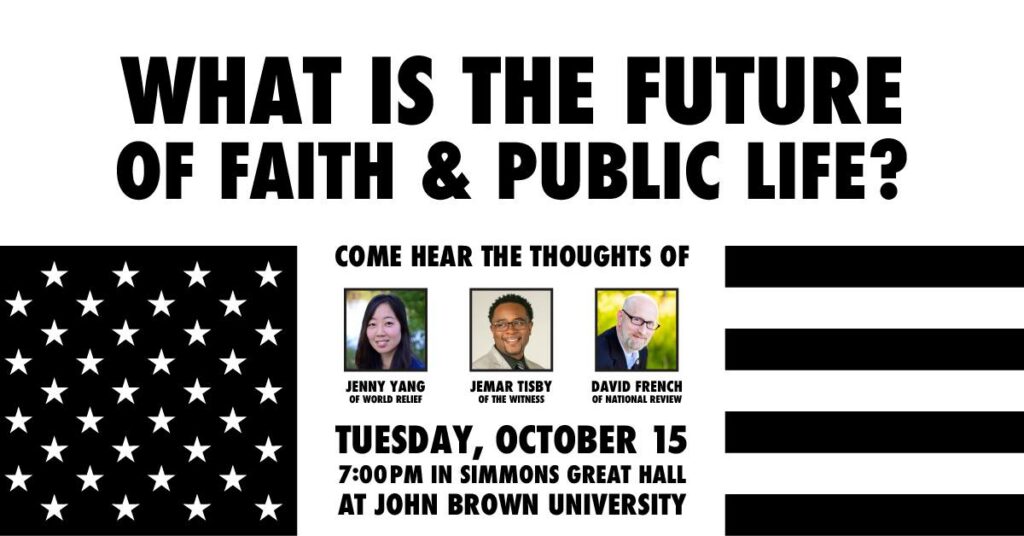 David French wants to save Christians from partisanship, but is this wise?

French’s advice for American Christians is to pray: ‘God save me from being a partisan.’ And ‘Pursue Justice With Love.’

David French thinks partisanship is a bad thing. In a talk at John Brown University during October (see video here), where one speaker called National Security the new Prosperity Gospel, French explored how White Evangelicals are some of the most partisan Americans. French assailed this trend because it plays into the dislike, rivalry and even latent hatred of negative partisanship.

“As the most dedicated partisans, we become tribal and we act tribal,” French said. This tends to go against the witness of loving those who persecute us, as Christians are commanded, according to French.

This presents an interesting bit of confusion about the individual role of the Christian with the role of a magistrate. More on that later.

His solution for excessive partisanship from White Evangelical Christians is simple, “We have to rediscover love of even those we consider a political enemy. That has to characterize who we are going forward.”

He proposed one way to showcase this is through a Legal Golden Rule: “Fight for the rights of others you would like to exercise yourself.” His example was how Christians should defend the rights of liberals kneeling for the national anthem just as well as they defend the free speech rights of conservatives fired by Silicon Valley tech lords.

During the Q&A section of the event, French illustrates several issues. In calling Christians to avoid hypocrisy, he rightly critiques double standards, but then fails to grasp that lesser evil moral thinking is justified and appropriate behavior. In a fallen world, we must uphold greater commandments over lesser ones.

Therefore, white evangelicals rightly prioritize abortion and religious liberty when voting. These are the most critical issues that involve the state.

In fact, French demonstrates here his confusion on how Christians must practice politics. He mocks Christians who prioritize the rule of law over ephemeral claims of public witness. He said, “The court might go 5-4, that’s too much for Jesus. That’s not the attitude of hope and faith. That’s not approaching the world with confidence.”

Preventing political enemies from gaining control of the Supreme Court isn’t fear, but wisdom. If someone wants to murder you, do you hand them the gun to do it? If someone wants to strip your rights or murder unborn children, it is Christian to allow it?

French’s advice is dangerous. It is naïve in its view of progressives—many if not most actually want to destroy you if you are a conservative. French even affirms that he experienced this level of hatred during his pro-life advocacy days at Harvard Law School. He described receiving “death aspirations” while there. (Sadly, he experienced even worse from Alt-Right bigots.)

It is also dangerous because it muddles the individual commands for the Christian with the state’s duties. What might be just for the individual is not the same thing as a just action for the state.

This is likewise for the policy positions a Christian should promote. When a Christian votes, he votes not on his individual responsibilities but to help the state pursue its God ordained ends.

In the United States, we live in a democratic republic. Our system places sovereignty with the people, who rule through law. Dr. Tom Ascol of Founders helpfully described the American as a citizen-king.

Viewing our political responsibilities this way, illustrates that while functioning as a citizen-king we exercise the power of the magistrate. Does the ideal magistrate fail to lock up a criminal or execute the murderer because of love?

The ideal magistrate is going to understand his personal duties are different than his political functions.

This is an important distinction for the Christian. We need to personally fulfill the commands of Christ, but when dealing with politics apply God’s specific commands for government. This is a critical. Often the best way to love our enemies is to enact laws that they might hate—for example, laws to save the lives of innocent babies.

Also, ruling requires wisdom (see, Solomon). If your enemies seek to destroy the nation, should we turn the other cheek?

And that is the real problem with David French’s political theology—he doesn’t appreciate his enemies will destroy him and his freedoms when given the chance.

One thought on “David French says white evangelicals are tribal, need to be more loving”