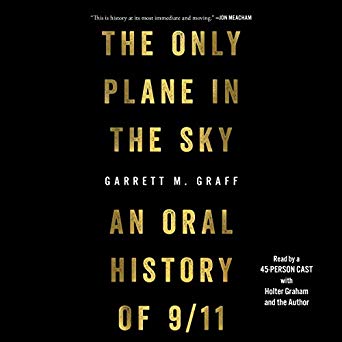 Twitter is a cesspool of partisanship, but there are excellent things on it. One informative use of Twitter is Ari Fleischer’s annual 9/11 thread. He recounts events from that historic day. He provides details from a witness at the President’s right hand. These details are important.

While reading the thread, I noticed a book recommendation. Fleischer suggested The Only Plane in the Sky: An Oral History of September 11, 2001. So, after having just (speedily) read Todd Starnes book to review, I decided to pick up the Audio version. Wow.

The audible production is powerful. You feel the emotions as the stories unfold.

It all comes through in the audio of the book. Typically, I’m not an audio book fan. This is amazing.

My wife and I talk about September 11, 2001 and one of the memories of that day was how clear the skies were. They were clear in Birmingham (where I was). They were clear in Atlanta (where she was). And they were clear in New York (where television cameras showed the attack.) The book recounts similar details from many eyewitnesses. Blue. Cobalt Blue. Cerulean Blue. Details like this are important. It shows Garrett M. Graff’s mastery of the subject. No detail is missed.

I’m just over 5.5 hours in of the approximately 15 hour book, and I’ve already ordered Graff’s history of Raven Rock. I’m looking forward to that. This is a good time for me to read it since I just completed: Kissinger on Kissinger, which provides a Grand Strategy look at a period of the Cold War.

One of the things that struck me about the period immediately after the Sept. 11 attack was the way the country unified. The 2000 election was divisive, but for a brief time, the country united against a common enemy. That didn’t last.

In contrast to that brief period of consensus, was the Cold War. Kissinger on Kissinger provides some interesting details about the bipartisan nature of fighting the Cold War, and how that started to unravel during the hyper-partisanship of Watergate. Kissinger related,

Henry Kissinger: “And then some of the Democratic leaders got the idea that if Nixon was for détente, a little tension might not be too bad, so the lines were shifting.”

Winston Lord: “Yes. You were the doves, and they were the hawks!”

Kissinger: “But we had one great advantage, that there were a lot of serious senators who had been in office for a long time and who were very much guided by the principle of the national interest. So you could call in people like [Richard] Russell, or [John] Stennis, or the chairmen of the various committees and say, ‘Your country needs this,’ and this wouldn’t be taken as a PR trick. Two or three times a year you could get at least a substantial reaction. You shouldn’t abuse this, but there were people to whom you could talk that way.”

Kissinger also talked about the decline of civility. One example was from his time at Harvard. He said,

“When I was a graduate student in the fifties, Harvard was 90 percent Democratic, as it has remained and maybe increased, but when Republican Cabinet members showed up at Harvard, they were treated with respect. The political debate in America in the fifties and early sixties was about the adequacy of policies. Sometime in the sixties, the political debate turned into a debate about the motivation of leaders and their inherent moral adequacy.

“And it became fashionable to accuse presidents and Cabinet members of representing immoral systems against which any kind of violent demonstration was not only permitted but necessary. So this tendency of trying to squelch opposing views became a dominant view.”

How times have changed.

Both politically and technologically.

I read the Kissinger book on Kindle. I have to confess, it took many years for me to embrace digital books. Now, I love them. I even use online digital books. These digital tools make research easier. The Audible book on 9/11 adds a new technology to make the most use of my time. The time in my car not dedicated to listening to a podcast can now be used for books. I can be more productive than ever.

So, if you haven’t considered Audible or similar audio book options, you should.

2 thoughts on “A 9/11 Book Recommendation & other book thoughts”