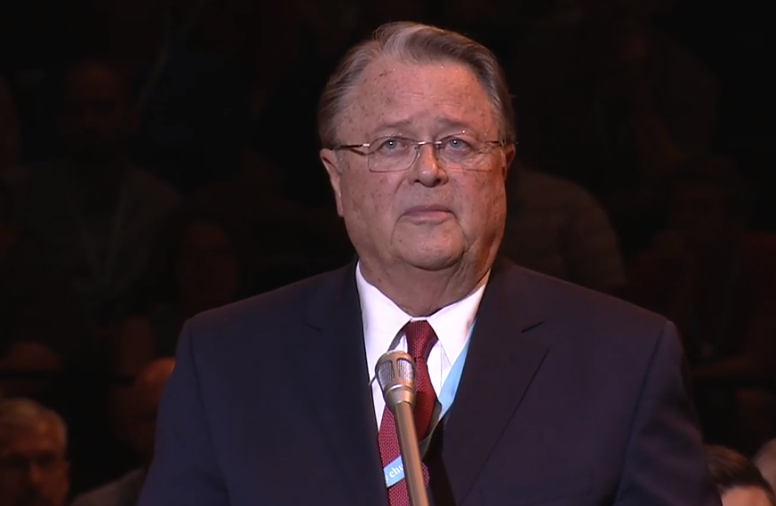 A messenger’s motion on accountability offers hope to Southern Baptists.

Today Southern Baptists pay the salaries of employees like Russell Moore and Daniel Akin, but churches are not informed how much top employees receive.

The messenger was Morris Chapman.

Chapman has a distinguished history. He is a former president of the Southern Baptist Convention, former president of the Executive Committee and a lifetime of service to evangelism and stewardship. He was discerning in his critique of the Great Commission Task Force recommendations. He was years ahead of his time in his warnings about the dangers of entity heads meddling in Southern Baptist Convention operations.

Many years ago, Chapman warned,

“Why then should any head of an entity seize the opportunity any given year for public participation, aside from voting as a messenger, in the election of our SBC officers? To do so risks much good will and enormous respect normally gained over many years by individuals who have been elected to lead entities of the Southern Baptist Convention,” Chapman warned. “When a president of an entity publicly endorses a potential nominee or nominates a candidate for elected office, he potentially alienates some who otherwise hold him in high esteem because they differ with the person he has embraced publicly for an elected office. Consequently, the entity head endangers his potential to provide effective counsel and spiritual leadership to the larger body of Southern Baptists although their beliefs may coincide with the entity head on most other issues.”

The Southern Baptist Convention should consider a plan to muzzle convention employees from exercising influence over the election of SBC officers. There is something unseemly about attempting to influence the election of the person who will appoint your trustees. Maybe someone should offer a motion to ask the Executive Committee to amend our bylaws to rule ineligible as messengers anyone paid out of CP funds? Wouldn’t that be a way to cut down the excessive influence of the growing bureaucracy?

But, that’s a fight and conversation for another day. Dr. Chapman’s resolution is about restoring confidence and transparency to our entities. Southern Baptists need that more than ever. Our SBC elites are drifting. They’ve embraced dangerous progressive philosophies on identity politics. And refuse accountability by revealing salaries.

Here is Dr. Chapman’s own words explaining the purpose of his motion. He gave these remarks during the afternoon session before the referral of his motion to the Executive Committee.

“My motion is very simple. It asks the Executive Committee to examine our current policies to see where Southern Baptists may improve our financial accountability and transparency. I was thrilled a moment ago while I watched the emphasis upon foreign missions. We’ve got a great mission force around the world and how strongly we are able to support them with our gifts and love and prayers. But we also expect them to be honest in their reporting back home. And it is our desire that we who are administrators and executives working throughout the entities of the Southern Baptist Convention be just as trustworthy and as honest as those who are serving in the field giving a report to us.

“This year, the light has shinned on our cooperative work in ways that have revealed our need for reform. I am thankful for the work of our new executive committee president Ronnie Floyd. He is already doing in just a few short weeks much to bring about needed reform.

“And yet, we cannot stop there.

“By the power of God, we must use this opportunity of self-examination to make sure that everything we are doing for the Lord is with integrity, accountability and transparency.

“One day, my fellow Southern Baptists, we will give an account to the Lord Jesus for what we have done with vast resources he has given us. Let us covenant together today that we will stand before Him, confident we have been good stewards of His kingdom.

What a blessing Dr. Chapman is to the Southern Baptist Convention.

It is unfortunate Dr. Chapman had to make the motion. Southern Baptist entities should tell the churches and people who fund operations exactly how much our entity leaders are paid. More than one small church pastor has requested information on Russell Moore’s compensation, and was told it was none of their business.

That’s not how servants of the Southern Baptist Convention should act. They work for the churches—not the other way around.

As Dr. Chapman noted, now is a time of reflection. Will the SBC show itself faithful to the churches who compose it, or will the Southern Baptist elite ignore this chance?

An email sent to the press office of the Southern Baptist Convention seeking details for how the Executive Committee considers such referred motions and the timetable it uses for consideration was not answered as of press time.

One thought on “Can Morris Chapman save the Southern Baptist Convention?”