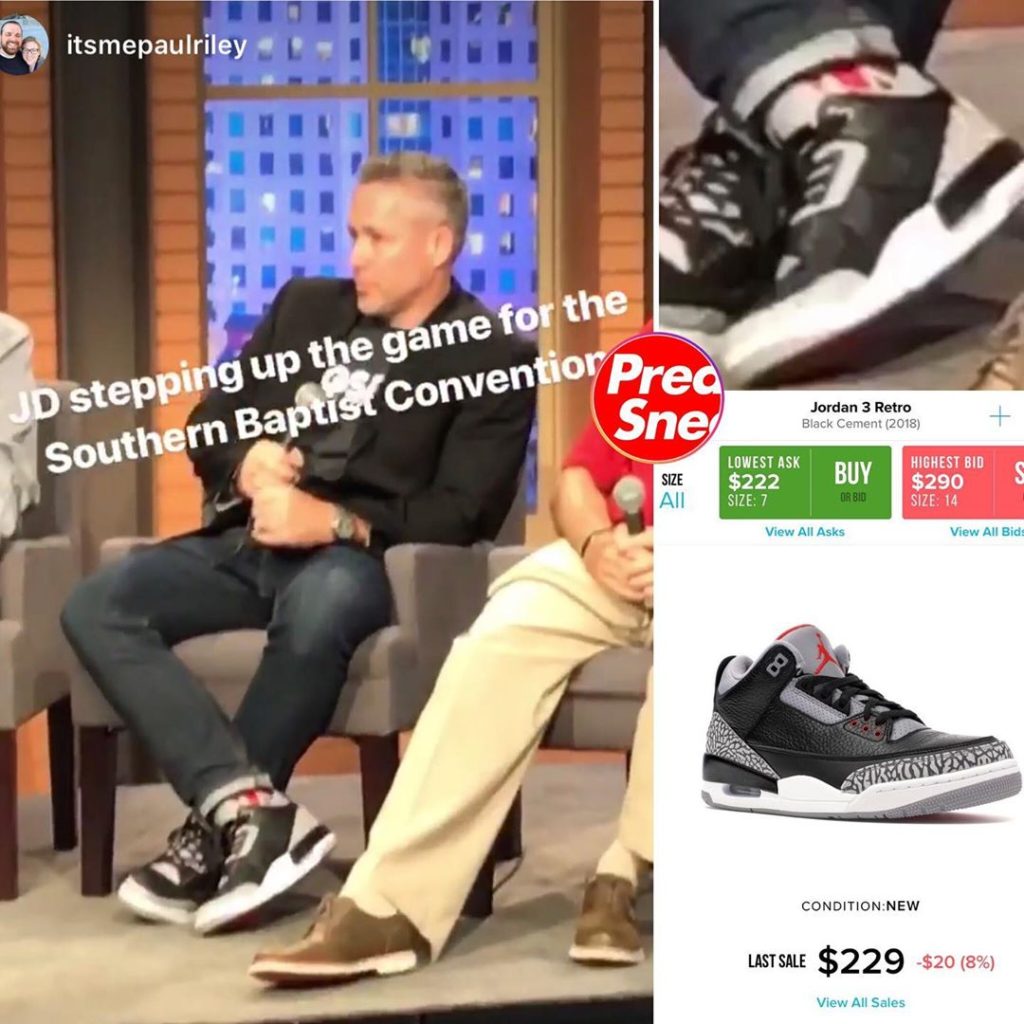 •The Southern Baptist Convention’s Sex Abuse Problem
•Executive Committee sends proposals to crack down on sex abuse, racism to Messengers for consideration at the Annual Meeting
•The Annual Meeting begins this morning in Birmingham
•Even the Social Justice Warriors aren’t exempt from the sex abuse stain

Greear gets stylish at SBC

As the Southern Baptist Convention Executive Committee and Pastor’s Conference was underway, J.D. Greear cut a stylish look sporting a pair of Jordan 3 Retro shoes with a price tag of about $220, according to the Preacher Sneakers Instagram account.

Thankfully, there is no vow of poverty in evangelicalism.

A New York Times report devastated the image of one Social Justice Warrior Southern Baptist pastor, Matt Chandler, and his Village Church with a story published Monday revealing startling details about how the church treats sex abuse survivors and deals with members.

The New York Times revealed two things with its report on Matt Chandler and The Village Church’s feckless response to a sex abuse scandal: first, you can be a Woke Social Justice Warrior pastor and that won’t protect you from scrutiny; and second, The Good Old Boy Network protects itself.

“For months, relatives of the Braggs had been pushing them to hire a lawyer, but the family was nervous. Trusted church friends said hiring a lawyer would not be biblical, citing scripture and the membership covenant.

“Ms. Bragg felt haunted by an episode at the Village a few years ago, when a woman annulled her marriage after discovering that her husband used child pornography. Church leaders disciplined her for not following the covenant’s marriage protocols. Eventually, leaders apologized, but Ms. Bragg feared similar discipline from the church.

“When the Braggs met representatives of the Village for a legal mediation in mid-May, though, the family brought lawyers. No pastor participated, and no resolution was reached. Ms. Bragg and her husband withdrew their membership from the Village the next day.”

Chandler’s church left a victim and victim’s family feeling isolated and alone. The church fired an employee accused of sex abuse, but didn’t tell anyone. Does that sound familiar?

Kevin Ezell refused to testify before a grand jury investigating a church volunteer, and didn’t think he should inform the church that a sex offender (no allegations involved the church or the offender’s time at the church) worked at the church.

Why should parents be told about a predator in their midst? That’s inconvenient. Besides, it might hurt the image of the church.

Ezell is now president of the North American Mission Board.

According to one victim advocate and noted blogger, “JD Greear believes that those who criticize CJ Mahaney are guilty of character assassination. I know because he told me that I was.”

So, while the SBC appears to be moving in the right direction, one has to wonder how serious Southern Baptist elites are about these issues. They only jettisoned Mahaney when it became politically inconvenient.

Bright Spot on Sex Abuse in the SBC: A plan for combating bad behavior

The best way to combat the problems of sexual abuse in the Southern Baptist Convention is to have men in leadership who behave like men. How to get mature men was the theme of the Founders’ Ministries conference Monday in Birmingham. There were many highlights, but Dr. Owen Strachan of Midwestern Baptist Theological Seminary is highly recommended.

Strachan spoke on the Warrior motif in Scripture. It was one of the best presentations you’ll hear all year. So, watch the video here. I’ll likely share more thoughts in a few days. It was an encouragement to engage in spiritual discipline to destroy sin.

Leaders who follow Jesus will protect the vulnerable among us. That is a solution, but one that requires everyone’s commitment.

Lots more to write from Monday, but the Tuesday sessions are underway and that requires my attention. Check back later for more updates.