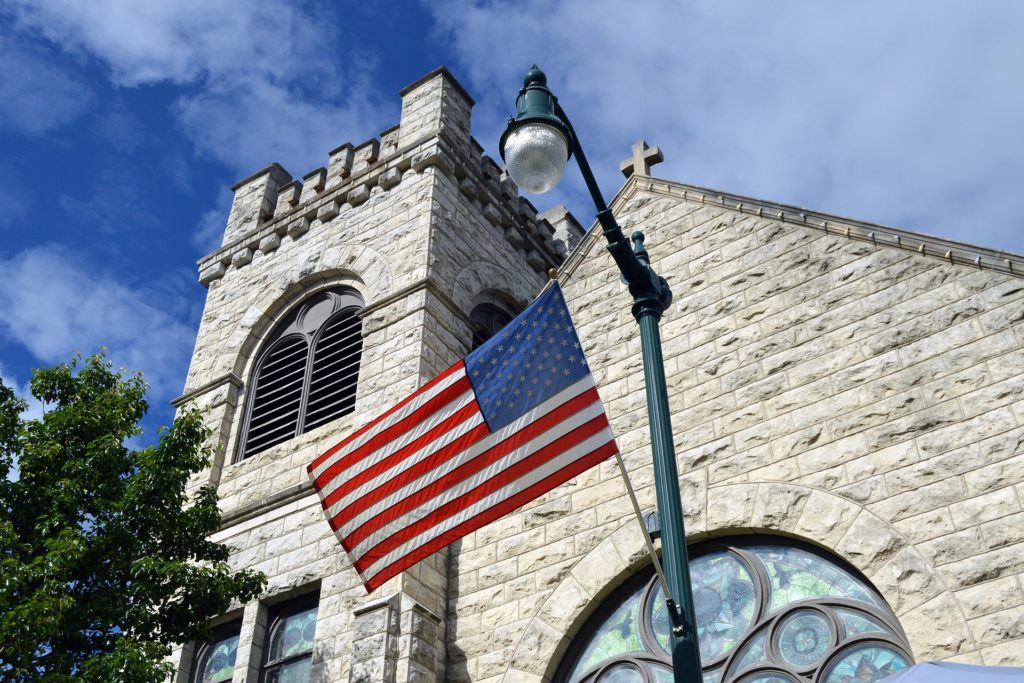 I had a very interesting interaction with a Professor of Sociology and Religion over Christian Nationalism. Dr. Samuel Perry asserted, that it was as serious an issue for Christianity as Critical Theory. He wrote on Twitter, “I get it. But critical theory needn’t be a competing religion. It can just provide perspective on power dynamics. Also, speaking of poisoning influences on Xtians, @TGC needs to write more essays on the incompatibility of #ChristianNationalism & Xtianity.”

The tweet included an excellent essay by Neil Shenvi and Pat Sawyer. The article makes a strong case that Critical Theory is a dangerous and competing worldview incompatible with Christianity. It is worth reading, and for further study check out Shenvi’s website with a substantial amount of additional research—Shenvi and Sawyer combed through the peer-reviewed literature to offer up a devastating critique of Critical Theory.

What is Christian Nationalism?

Dr. Perry explained Christian Nationalism is important to understanding evangelicalism today. He tweeted, “But it’d also be great to acknowledge how mainstream #ChristianNationalism (CN) is. We find 40% of evangelicals are what we call ‘Ambassadors’ of CN, meaning… ..they reject separation of church & state, they strongly believe the govt’ should formally declare the US a Christian nation, they strongly agree God has a special plan just for the US, etc. It’s not just fringe, racist evangelicals who hold these views, but MANY.”

Also he tweeted, “We have a 6-question scale, but other studies have used similar measures & observed nearly identical associations w/racism, xenophobia, sexism, etc. We find the opposite trends for measures of religiosity, so it’s not about being religious; it’s about being Christian nationalist.”

The research concludes, “Christian nationalism provides a metanarrative for a religiously distinct national identity, and Americans who embrace this narrative and perceive threats to that identity overwhelmingly voted for Trump.”

I would point to two key factors driving Evangelical Christian support for Donald Trump: abortion and religious liberty. These were elements I argued repeatedly for why Christians should vote Trump, or for that matter any Republican over a Democrat. If one concludes that innocent human life should be protected, then it follows that such a voter must vote against any candidate who favors the termination of innocent human life. Also, for a Christian who witnessed the genocide of Christians in Syria and Iraq, or the growing intolerance in secular parts of America’s largest cities, religious liberty would be another key issue. If a candidate supports erosion of traditional areas of Christian liberty, then it would be reasonable to oppose such state intrusion by supporting any other less dangerous candidate.

The research also found, “This brand of religious nationalism appears to be unmoored from traditional Christian ideals and morality, and also tends toward authoritarian figures and righteous indignation.”

The authoritarian attraction makes sense after years of GOP failure. Christians wanted someone who would fight—even if that man exhibited the behavior of a womanizing barroom brawler rather than a meek saint. Also, despite the historic Baptist experience of persecution, the cultural status enjoyed by Southern Baptists (and similar conservative Christians) in the Bible Belt, adopted elements of Constantinianism. One can detect it in the rise of the Moral Majority and Christian Coalition, and the recognition by many Southern Baptists that separation of church and state is only an American innovation and not a Christian doctrine.

I would dispute this. One can hold to deontological ethics and do two things: evaluate context and outcome. Why would a Christian ethicist look at those two things? Because any situation might have multiple deontological rules, and only by judging context and potential outcomes could the individual decide what rule applies. Two examples of this can be observed from the writing of Dr. Norm Geisler and Dr. William Lane Craig.

First, Dr. Geisler notes, “The Christian ethic does not neglect results. Although results do not determine what is right, they may influence one’s ethical decisions. For example, a Christian should calculate which direction a gun is pointing before pulling the trigger. Drivers need to estimate the possible consequence of their speed in relation to other objects.”

And, secondly, Dr. William Lane Craig using Dr. J.P. Moreland’s medical example writes: “Remember that deontologists don’t just ignore the consequences of one’s actions. They will consider the outcomes of actions when determining if a certain moral principle applies. For example, consider a doctor who is treating a patient suffering from advanced cervical cancer. This doctor may hold to the moral principle that a doctor should not inflict unnecessary suffering on a patient. Suppose he determines that the patient’s cancer is so advanced that round after round of chemotherapy and surgery would be ultimately unavailing and would result in months of unremitting suffering for his patient. In such a case he may decide that it would be wrong to prescribe such a course of treatment for the patient. I think you can see that consideration of consequences can be relevant factually to deciding which moral principle is applicable in a situation.”

All of that to say, Christian voters might look consequentialist, but are actually only selecting what rule to apply. For the 2016 election, the rule they applied would be: Voting for an adulterer is bad, but voting for or allowing the election of a baby butcher is worse.

Is Christian Nationalism good or bad? Here are some things to consider.

We know what Christian means, but nationalism is an entirely different issue. There are so many different definitions of it  used by scholars. We must be very careful in defining what we mean by it. Colloquially, nationalism is often used synonymously with patriotism. That is not what scholars or pundits mean by it. However, if we define nationalism very narrowly to be: the love of one’s own nation and its interest (think Henry Kissinger’s foreign policy realism), then it does closely relate to patriotism.

Now, there are a couple of important things that Christians should observe about the nation-state from the Bible.

First, God created nations. Also, he created states. He appoints their times and boundaries. (Acts 17:26). In fact, it looks like nations are part of God’s salvific plan since in Acts 17:27, Paul mentions that this division had a purpose. Such a view of the state coincides with C.E.B. Cranfield, who wrote, “It is implied that God wills the state as a means to promoting peace and quiet among human beings, and that God desires such peace and quiet because they are in some way conducive to human beings’ salvation.”

Related to this, nation-states are not necessarily bad, but often do good things. Mark Tooley wrote, “Nation states are the primary instruments in today’s world for the pursuit of earthly justice and order, to the extent possible among our fallen race. On what basis should they be disdained?”

Second, the New Testament contains obvious commands and encouragement for Christians to be good citizens in both the writings of Paul and Peter. Since patriotism is not forbidden, then working to make American better, is not forbidden. For a Christian, certain moral judgements, like on abortion or marriage, are policies that would make America better for everyone—whether they know it or not. Voting based on these policy preferences seems not only legitimate, but wise.

A practical defense of the nation-state rests on the dangerous example of globalist multi-national states. Would anyone wish to see a return to the colonialism of the great European empires? Or, would any of us wish to see a return to the eschatological promises of the Soviet Union? All of those examples, show that nation-states stood as the best protector of individual rights against somewhat messianic expansionist multi-national groups.

Understanding why Christians voted for Donald Trump and how that might correlate with what academics call Christian Nationalism is useful. However, the fact Christians have adopted an identity (Christian and American) and then promote that in politics is the natural development of trends in modern American politics—trends that scholars and pundits point out threaten or are perceived to threaten the safety and security of Christianity.

It seems Christians have good reasons to vote for candidates who promise to further their policy preferences. Isn’t that what all voters do?

7 thoughts on “Christian Nationalism: Is it Good or Bad?”