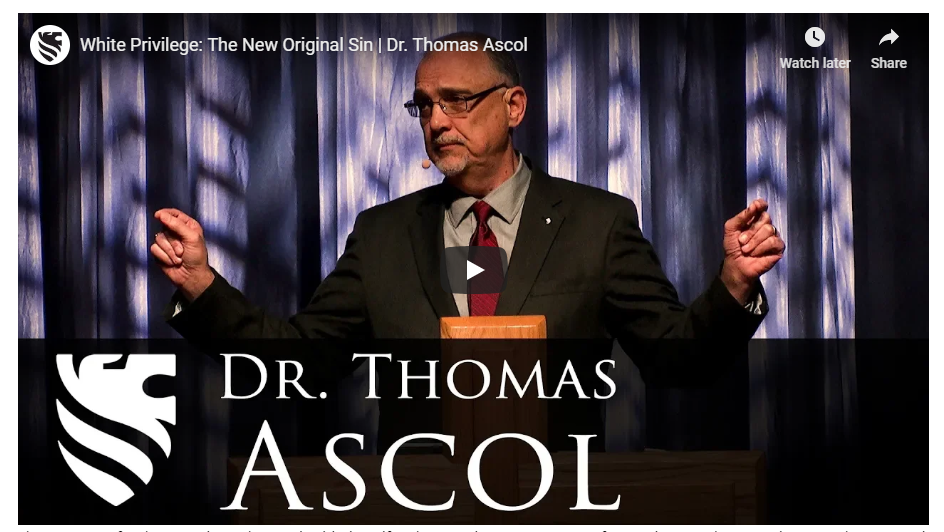 The Southern Baptist Convention needs integrity, leadership and to stand for orthodoxy against progressivism.

For too many years Southern Baptists have viewed Calvinism and Traditionalism as the division in our Convention. That isn’t what divides Southern Baptists. What divides Southern Baptists are those who hold to an orthodox understanding of the Gospel as opposed to progressives who promote ethnic Gnosticism and the “tearing down of all hierarchy” to empower feminism in the church. This division between orthodox Christians (and despite our differences, Calvinists, non-Calvinist Traditionalists and Arminians all fall within orthodoxy on soteriology) must end so that we may stand shoulder-to-shoulder in the great battle of our time—fighting the Social Justice corruption of the Gospel.

This is why I would strongly urge a Traditionalist to nominate Dr. Tom Ascol for SBC President. Someone should nominate him for the presidency in Birmingham. In 2019. While that might violate the new tradition of the current president running unopposed for a second one-year term, the crisis within the Southern Baptist Convention necessitates putting aside such a tradition.

This is a crisis. This is what creeping progressivism looks like as it devours a denomination. Within a short time, the Southern Baptist Convention will resemble the United Methodist Church if this is left unchecked.

The only check to progressivism is a strong, orthodox leader. I believe Dr. Ascol is that man. His presentation at the recent conference on Social Justice & the Gospel was a stirring defense against the Neo-Marxist racial assumptions. His dynamic, thoughtful lecture was heard by over 1,700 conference session attendees and watched by countless more on the Internet. He is a leader with a voice heard within not only the Southern Baptist Convention, but all of evangelicalism.

Dr. Ascol is a man of integrity. As such, I believe he would lead not as a Calvinist, but a Southern Baptist committed to unifying and representing all our theological traditions. The most important job of the president in many ways is the appointment of trustees. I feel confident that Dr. Ascol would appoint conservative Southern Baptists of all traditions in consult with state convention leaders. These trustees would hold entity heads accountable and not enable their wild, progressive moves. Otherwise, we will see only more Democratic campaign work out of our tithes and offerings as the ERLC becomes more blatant about where it stands.

The crisis is now.

Southern Baptists were warned about J.D. Greear’s progressivism before the debacle in Dallas. Unfortunately, not enough conservatives bothered to attend the convention meeting to stand against it. Birmingham 2019 provides a new opportunity (see: Why You Should Attend The SBC 2019 Annual Meeting in Birmingham).

To foster this spirit of comity, I’d encourage a strong Calvinist to nominate a good Traditionalist as SBC Vice President. There are many fine examples like Dr. David Allen or Dr. Adam Harwood. Let Birmingham 2019 be the start of a new grand coalition of conservative Southern Baptists who refuse to surrender to the spirit of this age, but stand strong for the Gospel.

The time is now. Let’s not wait until next year.