Rabid NeverTrump Russell Moore and his ERLC employees have bashed fellow Southern Baptist and Senate candidate Roy Moore. Moore stands as the GOP candidate in the election for the open U.S. Senate seat from Alabama. The lack of support for Moore is shocking, given the threat to life and religious liberty posed by his Democratic challenger–a challenger who supports unrestricted abortion and a secularist view of government. Of course, the failure to stand up for Republicans is nothing new for lifelong Democrat Russell Moore, but the leftist infestation of the ERLC would no doubt shock most Alabama Southern Baptists.

The most recent round of anti-Moore attacks arose on Twitter and Facebook from ERLC employee Joe Carter. Following Moore’s speech to the Family Research Council Values Voters Summit, the ERLC employee used Twitter to claim that Judge Moore was “unfit” for the Senate because Judge Moore was insufficiently supportive of religious liberty. He also used Facebook to claim Judge Roy Moore was a “nut job.”

You can view screenshots of Carter’s tweets.

Carter claimed it was “disgraceful” that groups like FRCAction endorsed Moore. 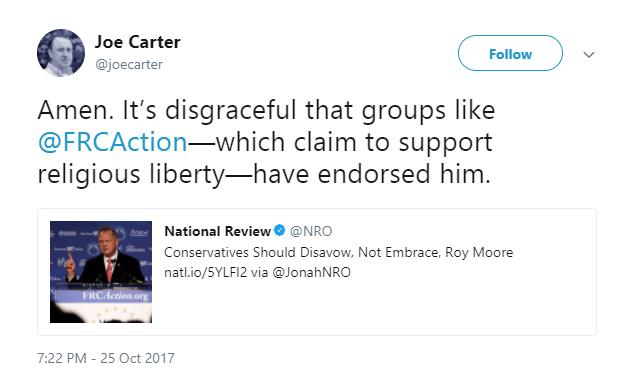 ERLC employee Carter, a man who is paid by Southern Baptists, attacked his fellow Southern Baptist and said “It’d be simpler to say Moore is unqualified because he has no respect for the Constitution, natural rights, or the rule of law.”

Then on Facebook, Carter double down on his attacks. He called Judge Moore a “nut job.” Then asserted Judge Moore believed something that to my knowledge, Judge Moore has never advocated.

Folks, this is who draws a big, fat paycheck from your tithes and offerings. Southern Baptists should wake up.

Of course this isn’t the first time the ERLC has abandoned any semblance of support for Alabama’s Roy Moore.

ERLC President Russell Moore urged Judge Roy Moore to resign instead of fight federal orders to issues marriage licenses to gay couples. According to reports, the ERLC president said, “any judge who ‘could not discharge the duties of his office required by law’ because of objections of conscience ‘would need to resign and protest it as a citizen.’”

The ERLC chief also asserted, “We must be very clear about the distinctions here between persons acting as an agent of the state and persons being coerced by the state in their private lives. If the definition becomes so murky that we cannot differentiate between the freedom to exercise one’s religion and the responsibility of agents of the state to carry out the law, religious liberty itself will be imperiled.”

There you have it. Russell Moore believes that a Christian cannot hold public office and have any disagreement with the secular philosophy or secular commands of the state. In other words, public service must be a safe space from consistent Christians.

Again, your tithes and offerings at your local Southern Baptist church support these men in their attacks on a fellow Southern Baptist—the only man running in the special election who is pro-life and pro-religious liberty.

Then decide to act.