Steve Spurrier is a bitter man. 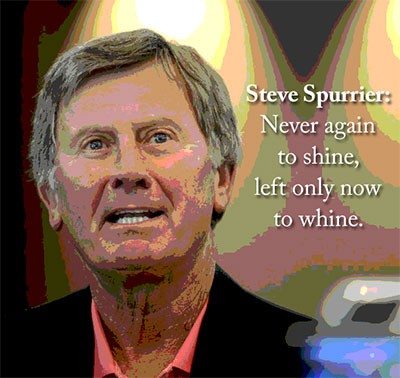 Just listen to him. Spurrier opines and whines like a bitter girlfriend whose former love has gone on to bigger and better things. Not that Alabama was ever his love, but the Tide had certainly expressed interest as Mike Shula’s tenure came to an agonizing end. And as Garth Brooks sang, some of God’s greatest gifts are unanswered prayers.

This week at SEC Media Days Spurrier continued his assault on the work of Alabama head coach Nick Saban. He wanted to illustrate that while Saban has had #1 recruiting classes, and is “the best recruiter college football has ever seen,” he’s only won the SEC title twice in his seven seasons at Alabama.

That is, two more times than Spurrier’s nine seasons at South Carolina.

This wasn’t the first time the Gamecocks’ washed up head coach has made jabs at Saban, who for the record never responds. Last year Spurrier was quick to point out how easy it is to win at Alabama…possibly juxtaposing the difficulty he’s had in winning consistently in Columbia.

Of course, it’s hard to put together a game plan when you spend most of your time on the golf course. 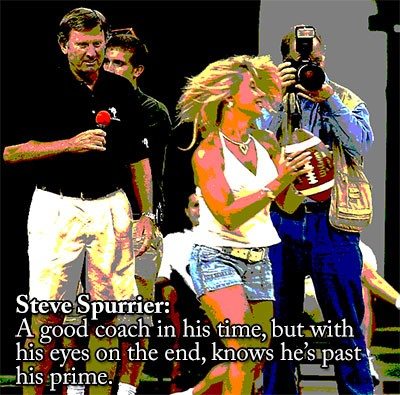 In the 1990’s Steve Spurrier was the face of college football. But those days are gone. Phil Fulmer began gaining ground on Spurrier at the turn of the century, and Steve did what he does best: Ran.

Spurrier ran to the NFL where he was a total failure in his two seasons in Washington. His experimental two seasons led to a 12-20 record with the Redskins, where he quickly found out that he wasn’t the cat’s meow he thought he was. A .375 winning percentage will send you back to earth quickly. (For the record, Saban went 15-17 in two seasons with the Dolphins, a winning percentage of .469…not good in any rite, but better than Spurrier.)

But perhaps nothing sent the “ole has been” back to reality as quickly as the University of Florida not rushing to embrace him with open arms when his little escapade had ended. The Gators had moved on, suffering through the Ron Zook years into the Urban Meyer era at Florida…a coach who would double Spurrier’s national titles in just six years in Gainesville.

That wasn’t supposed to be. Like a husband who goes after a Vegas showgirl, he was supposed to eventually trek back home, say his “I’m sorrys” and be welcomed back into the family. Afterall, he led his alma mater to relevance in the 1990’s, owning the league at a time when fierce competitors like Curly Hallman, Mike Dubose, Ray Goff, Jim Donnon, Terry Bowden, Sparky Woods and Brad Scott roamed the sidelines.

Instead, Spurrier’s legacy wasn’t enough, and the ego-centrical, lazy leader needed a soft place to land. Somewhere he could create reality for himself and a fanbase that had never experienced much of anything.

In his first seven seasons with the Florida Gators, Spurrier went 73-14-1 with one lonely national title. In Saban’s seven seasons at Alabama, he’s 79-15, with three National Championships. 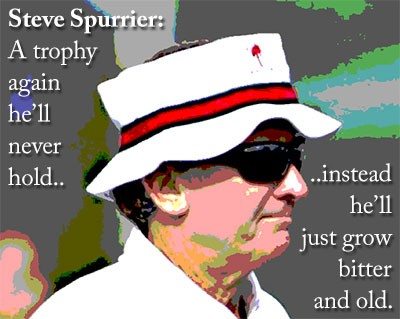 In Spurrier’s first seven seasons at South Carolina, he went a whopping 55-35, with zero titles, unless you count the 2010 SEC East title, giving him access to the bludgeoning his team would receive in Atlanta. Heck, in his full nine seasons in Columbia, he’s only won 77 games, two shy of what Saban has done at Bama in 7.

At 69, Spurrier knows his time in coaching is drawing nigh. At 219-79-2 (.733) in college, he’s assembled a more than respectable career. But that just isn’t enough. Something eats at him. He’s a man whose ego can’t let him rest, but whose affinity for leisure can’t let him work.

Perhaps it’s that invitation in the fall of 2006 that he turned down. The opportunity he knows he should’ve taken, but that in his arrogance he instead thumbed his nose at. Or maybe it’s that, at just 62, and 170-51-1, he knows that Nick Saban will eventually do what he’s done best in his time in coaching: Erase Spurrier’s legacy, exposing him for what he is.

Spurrier runs better than anyone in the business…his mouth, that is. But we all know what a barking dog is worth. The media loves it in this 24-hour, 7-day-a-week need for occasional soundbytes. But funny how ESPN promos opt for lifted trophies amid confetti over wagging tongues. And everyone knows, NOW, that’s ALL Steve Spurrier is.

21 thoughts on “Steve Spurrier: Still bitter, after all these years”