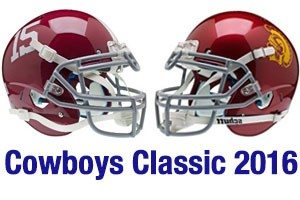 According to reports, the University of Alabama and Southern Cal will face each other in the 2016 Cowboys Classic in the Jerry Dome.

The meeting will mark the first time the two have met since 1985, where the Tide defeated to Trojans 24-3 in the Aloha Bowl.

The 2016 Alabama-Southern Cal game would also be the fifth straight marquee neutral-site contest for the Crimson Tide and seventh overall under Saban. The Crimson Tide have emerged the victor in all but one of those contests. The only loss came to FSU in Saban’s first season in 2007.

To open the 2012 campaign Alabama defeated Michigan 41-14 in the Cowboys’ venue in Arlington, and is scheduled to face Wisonson in 2015 there as well.

Also, given that he is still OC in 2016, the game will also be the first meeting between Tide Offensive Coordinator Lane Kiffin and his old team.

5 thoughts on “Alabama will face USC to start 2016 season”