After last season’s disappointing 11-2 finish (Mississippi State or Tennessee fan, say those words out loud and just imagine that’s the case for your school), it appears the point of emphasis for the Alabama coaching staff is simple: Take back control of the offensive line.

Alabama’s imposing lines of the past led to championships. Names like Fluker, Warmack, Jones, Carpenter and Kouandjio all moved you out of the way for power backs like Ingram, Richardson and Lacy to do their work. Most of the names just mentioned went in the first round of their respective drafts.

Last season it was clear early that trouble existed on the offensive line, with a less than impressive start against Virginia Tech. Late in the season, the weaknesses showed again with a combination of stubborn commitment and questionable playcalling when short yardage was needed in critical games. The lack of a true power back…or at least a trusted one…led to the anomoly of what we’ve come to expect from a Tide offense under Alabama head coach Nick Saban.

The answer? Bulk up on the OL, and bulk up they did with the immediate signing class. 2014’s haul included the #1 overall OL in America, and #1 tackle prospect in West Monroe’s Cam Robinson. An early enrollee, Robinson may see action as early as this fall.

The Bama staff then added the #1 center prospect in the land (Rivals) in Mobile’s Josh Casher…you know, from the city Dameyune Craig had supposedly locked Bama out of…don’t know if you know this or not, but Saban basically gets whoever he wants, wherever they are. Early mutterings this summer is that Casher has been impressive, and will be ready to step in as a sophomore when Ryan Kelly graduates.

All of the aforementioned were rated as 4-star prospects except Cam Robinson, who was rated a 5-star, and Jackson, who as a JUCO doesn’t receive a rating by Rivals. Almost 25% of Bama’s 2014 signing class was devoted to the offensive line.

Turn the page to the current class, where just yesterday Saban and his staff landed a commitment from the #1 overall center prospect in the country in Wetumpka, Alabama’s Brandon Kennedy. Kennedy arrived at his presser wearing a Wetumpka gym suit, quickly to reveal a huge smile and a Bama shirt underneath. His addition to last year’s class by itself would be impressive.

Yep, I think Nick Saban has a plan. 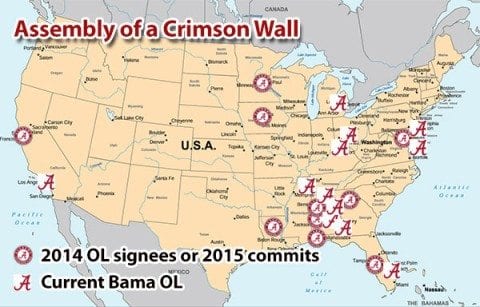 And running back? The spot the big uglies make look good? By seasons’ end Derrick Henry had found his legs, and should be ready to share the load with TJ Yeldon this season. We should see entries from Altee Tenpenny and Tyren Jones this season as well, members of the 2013 class dedicated to the Tide’s future backfield.

The only running back taken in this year’s class was a stud in five-star athlete Bo Scarborough. Already assigned jersey #1, Bo is a bruiser in the Derrick Henry, Trent Richardson fashion, able to run around and away from those he elects not to run over. Grades have been a concern, but the latest word is that he will qualify and will soon join his teammates in Titletown.

The recruiting season is obviously not over, and anything can happen. But Saban’s track record of keeping those committed to the Tide until the very end isn’t up for debate.

That said, if the game plan under new offensive coordinator Lane Kiffin is to control the line of scrimmage up front, playing man football and not the shell and nut game others cop out and employ, Bama defintely has the beef to do it.

6 thoughts on “Recruiting Update: Tide taking control of the line of scrimmage”