Many ask here why we report on Auburn. “This is an Alabama site,” some say. “Why do you care?” That’s an interesting question.

The truth is, I personally don’t. When I close my eyes at night, I’m not dreaming of ways I can even the score with Auburn. They are what they are.

The term “little brother” fits Auburn better than any others I can put to page. The Auburn fan fights a never-ending inner battle to juxtapose themselves against the history, tradition and accomplishment of The University of Alabama.

Auburn’s history can be summed up with one phrase: Flash in the Pan. Still one of the most penalized programs in NCAA history, Asterisk University is the scholastic personification of a program that carefully carves history to make things appear favorable to their following.

What am I talking about? Visit the Paul W. Bryant Museum, and you’ll see this: 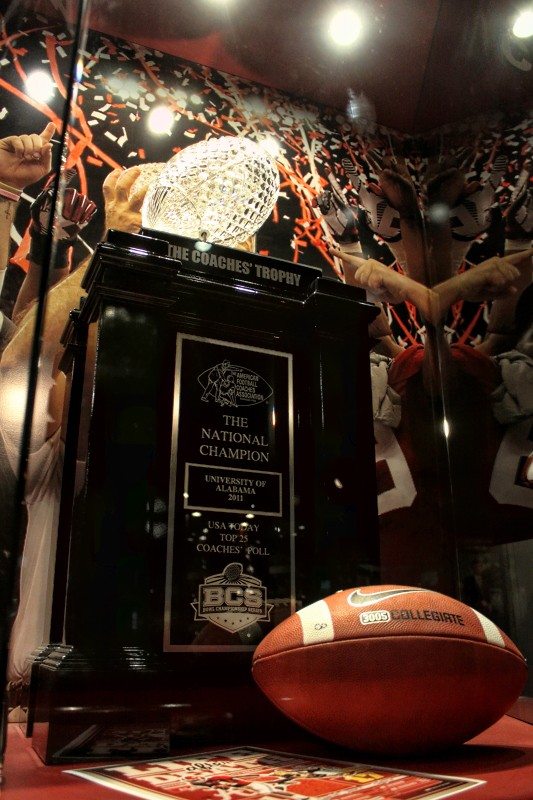 More accurately, you’ll see tons of these. Past National Championship trophies aren’t all crystal, but there are in fact four crystal footballs in cases in the museum. Yes, even the 1992 squad that defeated #1 Miami has one.

But there’s so much more. There are rings, bowl trophies (more than any other program has), championship memorabilia, The Bear’s actual desk and office furniture. It’s an amazing place, and if you’ve never been, let me encourage you to take the trek. Last I checked it was still just a meager $2 to get in and experience the rich history of Crimson Tide football.

What does little brother offer you?

The sum total of Auburn football is, and has always been, comparing itself to big brother. Again, many ask here why we report (and laugh) at what’s happening in Auburn. It’s because keeping an eye across the state on little brother isn’t really a need, just a pastime. When you see someone who makes you feel good about yourself, it’s a sort of pick-me-up. And they do!

Nobody cherry picks facts like Auburn fans. Want proof? Get ready for their revisionist historians to redefine how many national titles they have. Think I’m kidding? There was already serious discussion in Lee County just this year to award themselves 1993 (the probation team that went 11-0 but played in neither a conference championship game nor a bowl game), and 2004 (the team that went undefeated but sucked hind tit to Oklahoma and USC all season, both of whom remained undefeated right up until the BCS National Championship game…you know, the one Auburn wasn’t invited to). I’ve even heard talk of 1983, the team that lost to Texas but won the rest.

Auburn is like the fat kid whose mom, without telling him, lowers the basketball goal in the driveway to 8 1/2 feet so he can get a better shot at making baskets. So she can brag on him and give him more chocolate cake to celebrate.

The methods that program goes to to put accolades on lower shelves so they can reach them is simply hysterical. Suffering from sporting world Alzheimer’s, the above trophy doesn’t mention that the Tide was cut at the knees by the NCAA starting in 2000 that made the majority of those early wins possible.

It doesn’t mention the NCAA having to change the rules following 2010, a move that would’ve prevented Auburn’s historic run in 2010 because Cam Newton would’ve been ineligible. (Auburn fans, I’ll make it simple for you: The “I didn’t know” excuse of a father shopping a son, something Cam’s father is on record as admitting, is no longer admissible).

I find it hilarious that this bunch, who seem to hate rule changes, forgets this one.

It doesn’t mention that Alabama had to miss four field goals, play their worst game in two seasons, execute a terrible game plan, suspend a running back at half time, and be on the wrong end of the most improbable play of the 2013 football season in order to yield that last one. Translation: Bama had to put that game on the lower shelf for the Tigers as well.

So why do we cover Auburn here? One, because it’s the offseason, and there’s not much going on…until the HUNH rules are changed, the NCAA fixes the exploitation of the rules and Auburn fans collectively lose their minds.

But the other is this: It’s just fun poking and laughing at them. They literally make us feel better about ourselves, and little brother, we can’t thank you enough.