Well, all the letters are in, and only the Opelika-Auburn Times would disagree that Alabama has again signed the top recruiting class in the nation.

The surprise of the day came from Auburn High School standout Rashaan Evans, picking the Tide over Auburn…possibly the biggest signing day jaw-dropper in decades. Long thought to be an Auburn lock, the 5-star defensive standout was thought to be on his way to the plains. But instead, per his announcement broadcast live on ESPN, he’ll be getting ready for his NFL career wearing Crimson. 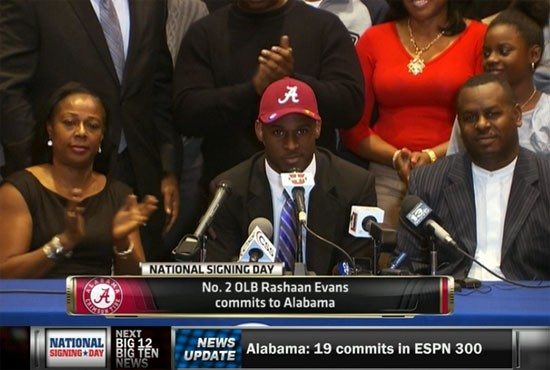 It’s like a holiday. No, it IS a holiday. Under Nick Saban National Signing Day is opulence in motion in Tuscaloosa, as year after year top talent is replaced by top talent.

Per the University of Alabama’s official athletics website, here are the recruits who have officially signed and faxed their letters of intent:

Nick Saban and company again signed an unreal class, the best in the land. A few centerpieces:

4-star linemen JC Hassenauer, Montel McBride, Joshua Casher and Ross Pierschbacher, coupled with 5-star lineman Cam Robinson (who many think is the best prospect in the entire 2014 field) are on their way to Tuscaloosa. Robinson is actually an early enrollee and already there. And then there is 6’7″, 310lb. JUCO offensive lineman Dominick Jackson, a beast…one of the top JUCO players at any position in the 2014 class.

Yes, the Tide’s OL is looking pretty nice in the immediate future.

In the defensive backfield, 5-star defensive back Tony Brown will later be joined by 5-star DB Marlon Humphrey, likely giving the Tide two eventual lockdown corners on either side. The two studs are joined by Laurence Jones and Ronnie Clark, both 4-star prospects.

But the jewel of the day, no question, was the signing of 5-star linebacker Rashaan Evans, from Auburn High School. If the Gus Bus can’t pick up a 5-star from his home town, what kind of longterm confidence can you place in him? Evans made a smart business decision today, one that will pay off in exactly 3 NFL drafts from now.