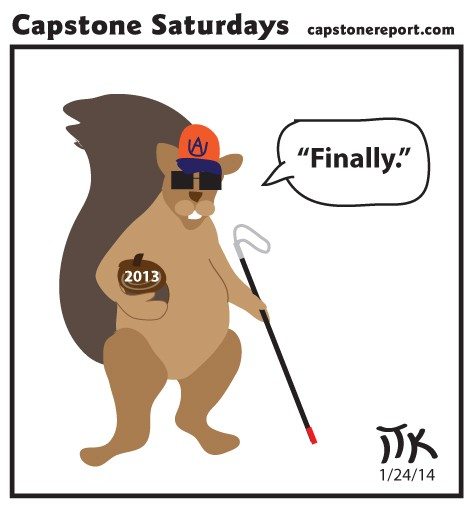 It almost happened. Well, not really. But in the minds of many, Gus Malzahn was almost swooned away from the plains after just one season.

It was a ridiculous notion, really. That a 2nd year college coach who depends on smoke, mirrors, and the kind of luck that would make a leprechaun say “what the heck?” would be tapped to take over an NFL franchise.

Both sides of the Alabama – Auburn rivalry are relieved at the hiring of Buffalo Bills defensive coordinator Mike Pettine. The man has seven years of head coaching experience…at the high school level. A career coordinator, Pettine was who the Browns organization truly wanted over the man Auburn fans like to say was responsible for their lone national championship since the Eisenhower administration.

While the Auburn cult gets to keep their idol for now, Alabama fans are also happy. Far more destructive would be a coach in Malzahn’s position with a history of building and establishing a program. Instead, Bama fans face a foe with zero history of doing such a thing.

You’ve heard it before, and it may be old to some, but it bears repeating on sheer, undebatable truth alone. Had the two Georgia defensive backs swatted Auburn’s last gasp away, in lieu of committing a Three Stooges type blunder, Gus Malzahn’s name would’ve never made it past the receptionist in Cleveland.

Alabama fans do not fear Gus Malzahn. Sorry to ruin your fantasy, barners. But blind squirrels find occasional nuts, as did the Tigers in 2013. And good for them. Suffering through three National Championships in Tuscaloosa had to be unbearable, and 2013 was a respite from their suffering.

But sustained success is something else altogether. It’s something no Auburn fan you know can ever say they have enjoyed. And while Gus may be the sexy soup dejour, so once was Terry Bowden.

Remember him? 11-0 his first season, winning his first 20 games until the wheels started coming off. He was a genius. He toppled Bama’s string of immediate success in the early 1990’s. Then Auburn fell off the face of the planet.

Remember Tommy Tuberville? 14-0 with nothing to show in 2004. A few years later, run out of town on a rail.

It’s the Auburn way. Flash in the pan, unreal season…then nothingness. Not strings of years of contention. Just a brief hoorah, then years of wearing the same t-shirt and savoring the same bumper sticker.

So what will the future hold under Malzahn? Who knows, but if history repeats itself, expect a Music City Bowl bid soon. All because the Browns did the right thing.