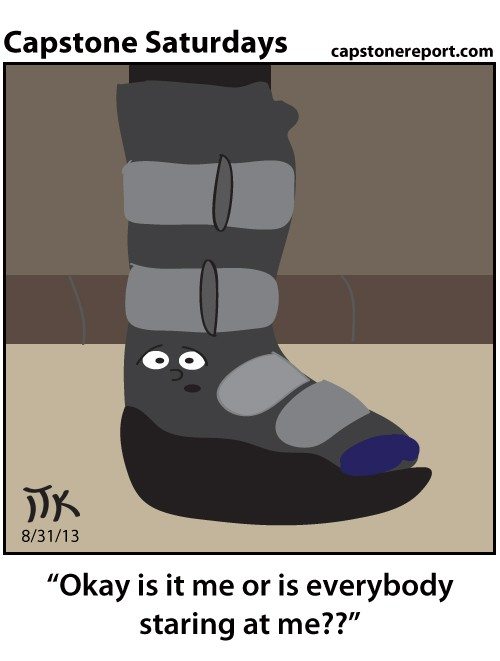 AJ McCarron showed up in Atlanta wearing a protective boot, and Twitter exploded. ESPN broke in with stories on the footwear, and virtually every news outlet made the boot a story.

I had a close friend hit me up for information while refusing to hear the truth of the situation.

Him: “AJ showed up in Atlanta wearing a boot (Twitter pic attached)

Me: “It’s nothing. He had an ingrown toenail procedure on Monday and it’s just for comfort.

Him: “Yeah right. My son had that done and he wasn’t in a boot.”

Me: “Your son isn’t the starting quarterback for the two-time defending national champion.”

Him: “It’s gotta be more than an ingrown toenail.”

Me: “He had it done, then had to immediately practice on it all week. It’s probably uncomfortable and they’re just resting his foot.”

Nervous nellies like my friend, and millions just like him hoping for an injury to one of Bama’s main cogs to success in 2013 (or dreading it) will be disappointed today when McCarron suits up, plays every snap and throws for 250+ yards with 3 touchdowns.

The boot, and toenail, are a non-story.

But then, when you’re talking about college football’s #1 wrecking ball, the Alabama Crimson Tide, you have to look for stories within stories to give yourself hope that there’s a chink in the armor.

Not today. Virginia Tech will offer intensity for the first quarter and a half, and Logan Thomas will challenge the Bama defense to spread the field and defend the talented QB runner. But the Hokies will quickly find themselves in the deep end of the pool with the neighborhood bully bearing down on them.

Virginia Tech was the last non-SEC opponent to lead Alabama going into the fourth quarter, dating back to the beginning of the 2009 season. Don’t look for that to happen today, however. It’s more likely AJ McCarron’s boot walks itself out of the locker room and onto the playing surface for a little soft shoe performance at midfield.

In other games
The fighting Dabo’s edge Georgia in a shootout, but afterward Bulldog fans talk about how close they came to being 1-0.

Flighty Washington State head coach Mike Leach watches the original Pirates of the Carribean movie in pregame on his iPad, completley forgetting to prep his Cougars for battle, and Auburn fans act like (and really believe) “Auburn is back with a bite!”

Bobby Petrino rides up to the stadium on a Harley and rides out 1-0.

For the 10th consecutive meeting, nobody actually gives a crap about this game, or either of the teams playing in it.

Les Miles asks to see the frogs from TCU trained to play horns in his pregame interview. Disappointed at the misunderstanding, LSU still smokes TCU and makes a statement about their place in 2013.

***Upset of the day***
Brett Bielema dusts off his speech for the postgame presser about being a year away from where he wants his team to be. Still, a woman in Arkansas tapes her nose with scotch tape, dons a pig hat and sings an uncomfortable song to the team in creepy vibrato.