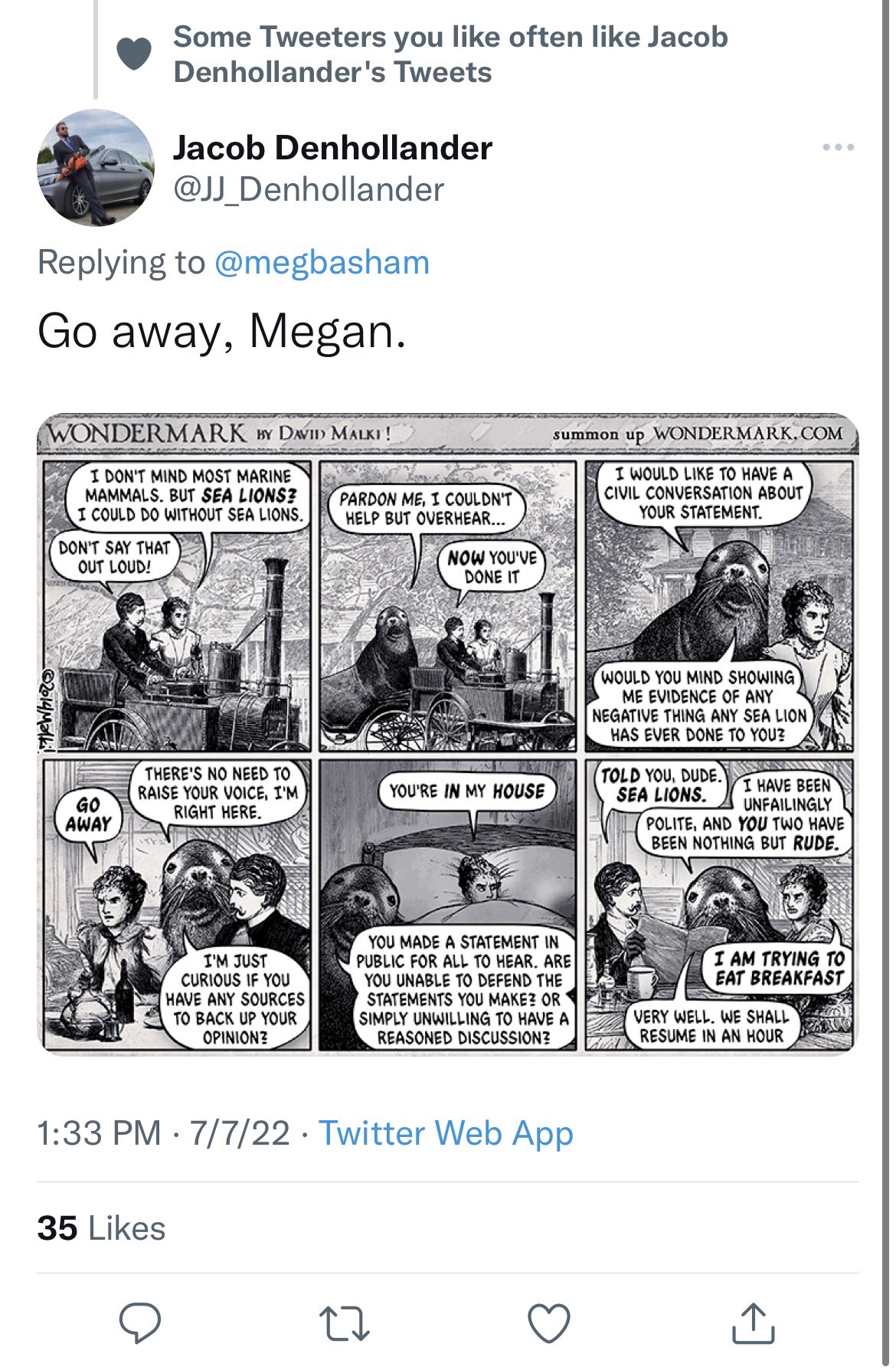 2 incidents show how the Denhollanders behave toward conservative women.

Jacob Denhollander, only known because he’s obnoxious on social media and married to a far more famous and successful woman, attacked a Daily Wire reporter over a factually true story in a sub-Christian fit that obviously violates the Southern Baptist Theological Seminary (SBTS) Student Code of Conduct.

Basham responded in a classy fashion—worthy of both an adult and Christian to Denhollander’s patronizing and misogynistic remarks.

She said, “I have no problem hashing out critiques of my Guidepost story. I’m open to hearing if you think something in it is unfactual. But what’s not fair play is throwing out insults then sneering “go away” when I defend my work. I know it gets cheers from your crowd. But it’s cheap.”

It is cheap, but what else should one expect from the Woke forces within the Southern Baptist Convention? Even Southeastern Baptist Theological Seminary (SEBTS) President Daniel Akin entered the lists to opine about how evil it is for reporters to question sex abuse victims. Really. That came from Akin—the man who did nothing to compel Karen Swallow Prior to come clean in the investigation of the Buck Blackmail scandal. (More on that later though.)

Also, Basham is herself an abuse survivor. This is something you should know and keep in mind.

Basham said, “So earlier today, I revealed here that I have been a victim of sexual assault myself. I was 23. I don’t think that’s important to my reporting. I don’t think I need to say it to be allowed to report on this subject.”

Why is this important? It shows the double standard of abuse allegations. If you are a conservative abuse victim, you are treated like trash. For example, Jennifer Buck.

Jennifer Buck responded to the attack on the conservative reporter. Buck said, “It’s funny what qualifies as the wrong type of woman these days. It’s sad to see the rudeness you’ve had to endure. Civility is lost.”

In one video statement Jennifer Buck said, “I have had to sit by and watch as Tom has been maligned. I have been made fun of and the intention and purpose of my article has been twisted by an intentional hit piece and not one acting leader has publicly spoken in our defense. We have been hung out to dry by the very people who have the power to change the conversation and the dynamic of the game.”

When the Bucks attempted to handle the blackmail attempt privately with those who possessed the document that was leaked to the press, Rachel Denhollander was involved. Denhollander was not helpful. In fact, conservatives now say it exposes her bias.

Former conservative radio host and journalist Janet Mefferd said, “She has lost any credibility she ever had on “caring well” for abuse survivors after the @JenniferBuck65 scandal. Everything is politics.”

Jennifer Buck responded, “Yes, I’m still at a loss on that one. With as much help as she gave Tom on dealing with the Willy Rice aspect and having talked to her before about our story. I was actually glad when I heard she was to be a part of the meetings. I thought she’d be impartial. I was wrong.”

Let that sink in. “I thought she’d be impartial. I was wrong.”