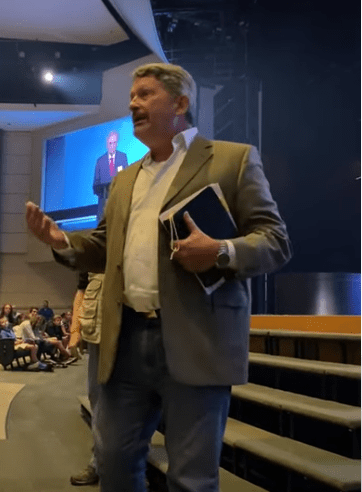 Why are McLean Bible Church and the Southern Baptist Convention ignoring the Rules of Order in their business meetings?

A congregational business meeting typically follows certain procedures. There are Rules of Order and proper process. However, at the McLean Bible Church business meeting July 18, the refusal of Evangelical Elites to be held accountable by their congregation was on display. As you can see in the above video, the McLean Bible Church meeting was punctuated by the presiding officer refusing to hear a Point of Order or answer any questions.

Jim Powers stood up and asked to be heard during the Congregational Meeting. The presiding officer, Larry Cooper, refused.

Powers then attempted to make a Point of Order requesting the Minutes of several previous Congregational Meetings be approved, per typical business meeting policy. Cooper ignored the request, and in short order church security entered to demand the man sit down or leave the facility.

Is this appropriate conduct for a business meeting?

And this might present additional legal challenges for the church that is already facing a legal filing in Fairfax County over its allegedly unfair practices in the June 30 MBC Congregational Meeting.

The issue presented in this video is that MBC members are entitled to a fairly-conducted meeting.

As a Fairfax County Circuit Court said in a case involving another church, “The First Amendment does narrowly allow members of such congregations to seek ‘the protection of the court for the purpose of obtaining a fairly-conducted meeting,’ and ‘in protecting civil and property rights.’· Id. (reasoning that it is in response to the frequent calls to civil courts to resolve such disputes). However, even in a congregational church, ‘[w]hen the majority has spoken in a fairly-conducted congregational meeting held after proper notice to the membership, then the governing body of the church has expressed its will and, as in the case of an hierarchical church, its decision is constitutionally immune from judicial review.’ Reid, 229 Va. at 189.”

So, was the July 18 McLean Bible Church meeting fairly conducted?

What should be of interest about this to those outside MBC is how this mirrors the recent actions of the Southern Baptist Convention’s meeting. In that meeting, control of the microphone was abused. Some speakers could raise Points of Privilege and others were ignored. Some people were allowed to speak, and others never given the chance. We summarized how SBC Elites acted by highlighting that the Southern Baptist Convention silenced a black conservative scholar and other conservative women.

This conduct at MBC and in the Southern Baptist Convention goes to the heart of the problem in Big Eva (Big Evangelicalism). These Elites believe they are entitled to rule and the serfs should sit down, be quiet and keep giving money.