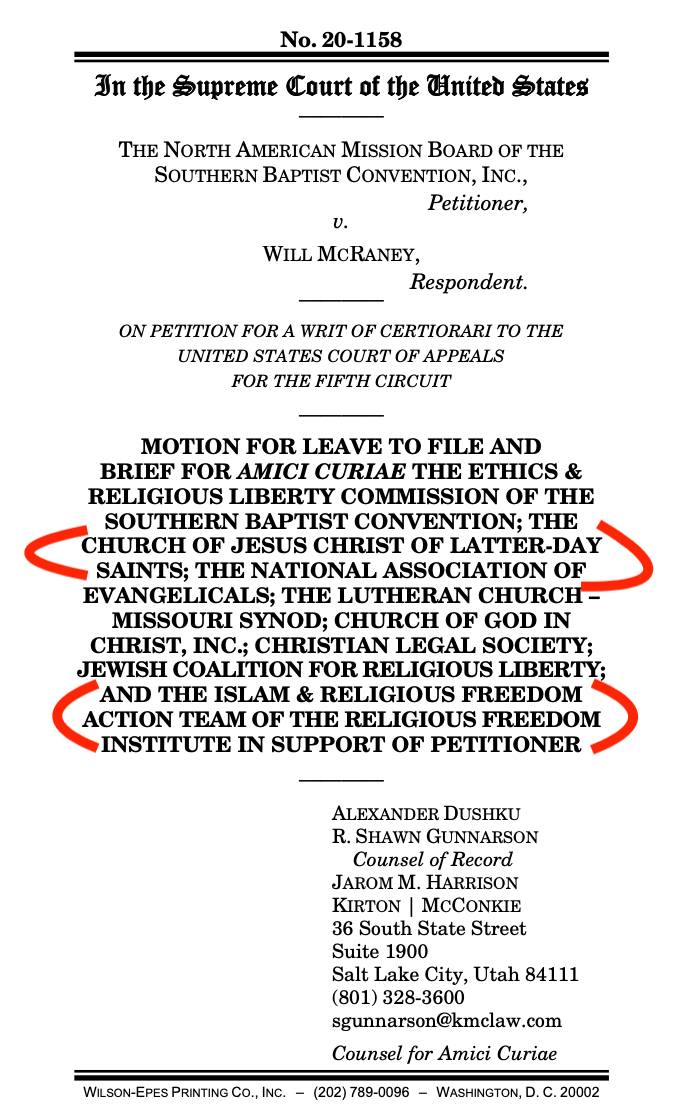 After insulting Catholics, Russell Moore teams up with Mormons and Muslims to attack Southern Baptist Will McRaney.

Oops, he did it again! Russell Moore’s ERLC files misleading amicus brief with Supreme Court! Did he bother to read it this time?

Will ERLC Trustees, SBC Executive Committee and State Executive Directors act or remain silent under such a great threat?

The amicus brief filing runs about 30 pages and is yet another serious error for the Southern Baptist Convention. The filing submitted by a lawyer from Salt Lake City contains numerous factual errors that repeat the problems the ERLC already experienced in filing an amicus brief in the case involving McRaney.

Then, Russell Moore made anti-Catholic statements against the lawyers the ERLC joined in filing the amicus brief. In a stunning display of bigotry, Russell Moore blamed the brief on the Thomas More Society lawyers and said he didn’t like working with them.

Oh, and he also blamed his ERLC staff.

Now, Moore is working with Mormons and Muslims.

How does he feel about that?

How do Southern Baptists feel about that?

Remember only a few years ago Russell Moore faced criticism from Southern Baptists over filing an amicus brief to help build a mosque.

The bottom line is that Russell Moore’s anti-Catholic bigotry was a cynical attempt to get away with filing a false brief with the Fifth Circuit Court of Appeals. His action this time is just as cynical. His priority here is saving his job and keeping his buddy and former pastor Kevin Ezell in power at the North American Mission Board.

Unfortunately, this comes at a cost for Southern Baptists. Russell Moore’s ERLC continues to file false and misleading legal documents with federal courts. In this amicus brief, the document attempts to make it sound like McRaney worked for the Southern Baptist Convention.

The opening sentence of this new brief is deceptive and likely includes intent to mislead the Supreme Court about the relationship between McRaney and the Southern Baptist Convention. It claims, “This case involves tort claims by a removed minister against the entity tasked with missionary work in North America by the Southern Baptist Convention.” The tort claims have nothing to do with NAMB’s missionary work. At issue here is whether the First Amendment gives Kevin Ezell the right to slander, defame and maliciously harm an individual who works for another independent organization. Manifestly, the First Amendment includes no such blanket protection for illegal acts even when dressed in the guise of religion.

Further, the brief makes numerous other attempts to confuse the court. For example, “That result is startling. McRaney admits that the case originated as ‘a battle of power and authority between two religious organizations’––both of them Southern Baptist––over ministry strategy.” McRaney on Facebook made an important refutation of this.

McRaney said, “My employer, the Baptist Convention of Maryland/Delaware, IS NOT a member of the SBC. These guys and Ezell and Moore have really sought to muddy the waters hoping to fool the judges and the others who signed off on the brief.”

That’s the entire point. These are independent organizations without any hierarchy.

Moore was cynical in his anti-Catholic statements. This is another cynical attempt at deception.

Southern Baptists should end the ERLC before it destroys the SBC.

Will anyone stop Russell Moore and Kevin Ezell? Will anyone stop the entities run amok? Will the Executive Committee file an amicus brief refuting the ERLC and protecting the SBC? Will the state convention leaders?

Time is running out. Russell Moore must go and so must the ERLC.

5 thoughts on “ERLC files amicus brief with Mormons and Muslims”