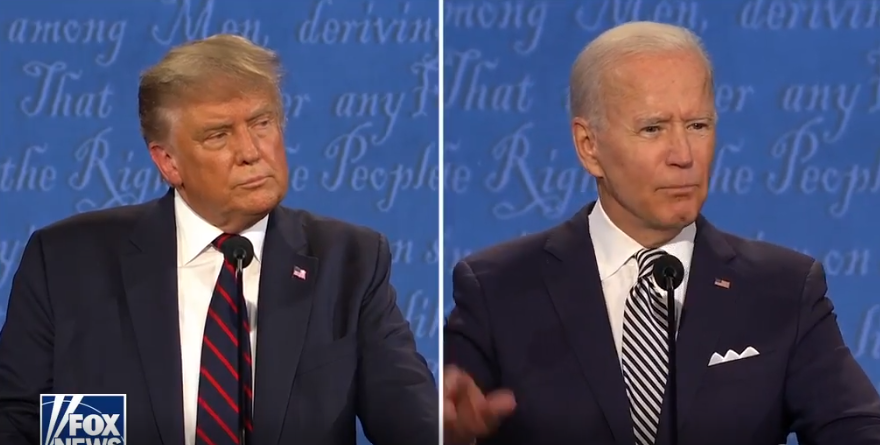 Our Duty to God, Duty to Country, and Duty to Family all require the Christian to vote for Donald Trump.

The Christian has a duty to his God, his country and his family. Each duty demands a vote for Donald J. Trump for President. Each duty for one with a Christian worldview rejects Joe Biden and the Democrat Party as evil. Voting is not an element of Christian liberty. We do not get to substitute our feelings for God’s absolutes. We must apply the Bible and judge as it judges. The result is that Joe Biden and Democrats are weighed in the balance and found wanting.

All of these duties and reasons flow out of God’s commands as revealed in the Bible. As we vote, we must consider what the Bible says about the purpose of government, our responsibility to the state and our obligations to our family. These render a clear verdict.

The Duty to God demands a vote for Donald Trump

While there are many elements of politics where God is silent (think healthcare policy, how many B2 bombers to procure or proper immigration levels), there are many areas where God speaks clearly. Those areas include abortion, religious liberty and security.

Christians have a moral duty to fight abortion and Donald Trump is the only electable pro-life candidate.

Some Christians prefer to virtue signal rather than fight evil. They are no different than the priests and Levites walking past the wounded man in Christ’s parable. They refuse to befoul their robes with the world. Unfortunately, this type of political theater is not open any holding a Christian worldview. God expects us to fight evil. He expects us to resist the Devil. Ignoring the murder of babies is not open to the real Christian.

God ordained the state to protect life and property. This is why God granted the state the power of the sword. As scholars have noted, there is some divine purpose in the creation of an ordered society—perhaps it is the best way for the Gospel to spread as C.E.B. Cranfield explained it.

A state that murderers babies is in violation of God’s primary purpose for the state. Further, Joe Biden and Democrats not only want to keep abortion legal but they want to make you pay for it. That is Joe Biden’s American. It is morally repugnant.

No real Christian can support this atrocity.

In fact, to vote for Joe Biden is to excommunicate oneself automatically. Such a move would require repentance since to aid and abet murder is sinful.

A Christian has a moral duty to God to vote to establish a ban on murder. This is only possible if a pro-life candidate who appoints pro-life judges is elected. That is Donald Trump.

As philosopher and theologian William Lane Craig said, to vote third party is a dereliction of one’s duty. Thus, to actually fulfill the moral duty, one must take effective action.

That effective action means a vote for Donald Trump.

Wayne Grudem explained the futility of voting for a third party too. He writes, “Therefore, a third party vote would be throwing away your opportunity to influence the government of this nation for good in the laws and policies it enacts.  ‘Do not withhold good from those to whom it is due, when it is in your power to do it’ (Proverbs 3:27). You have an opportunity (by voting) to help protect the nation from great harm that would come from the Democratic Party policies.”

The Duty to Country demands a vote for Donald Trump

As noted above, the Christian worldview holds that God ordained government for man’s good. Further, God commands obedience to the properly constituted authorities (Romans 13:7). In America, the properly constituted authority is the Constitution. We owe obedience to law and not men. So, when a Christian considers his duties in light of Scripture, the focus of that obedience is the rule of law as embodied in the Constitution.

The Christian should consider his vote based on his patriotic duty (as defined and limited by Scripture) to America. That eliminates any vote for a Democrat in general and Joe Biden in particular.

Democrats plan to pack the court, enact radical economic policies designed to steal from some and redistribute that to others. God speaks clearly and all of that is evil.

Democrats are crying to “pack the courts.” What that means is they will replace the independent judiciary with a pack of judges loyal only to the progressive, anti-Christian agenda of the Democrats. That is not good for America.

The Democrats will change the economic order too. Whether it is the nutty Green New Deal or some other combination of increased taxes and regulation, Democrats will favor some and punish others. This is the inevitable outcome of their racial identity politics.

The only politician standing up against the racial identity politics is Donald Trump. He has banned the use of the godless ideology of Critical Race Theory that divides Americans.

How insane are Democrats on the issue of race? They always take the side of the violent offender. For example:

If you love America and take God seriously, you must vote against Democrats—who bring justifications for rioting and looting along with racial division. Donald Trump promises law and order and putting aside Marxist-inspired Critical Race Theory. The Christian duty is clear and we must vote for Donald Trump if we seek true racial healing.

The Duty to Family demands a vote for Donald Trump

Democrats threaten the very survival of the Christian family. Joe Biden embraces the radical, anti-family agenda where eight-year-olds who are confused about their sexual identity would be taken away from parents and chemically castrated.

“Do you know what ‘transgender rights’ mean for 8 year olds? It means that if you as a parent of such a child don’t buy into the self-dishonoring, Creator-denying delusion, state social services can take your child away from you. That is what it means. Biden’s position is stupid and immoral child abuse. Biden is completely in the tank with the ‘transgender’ agenda delusion and will treat any who disagree as ‘indecent’ ‘virulent’ bigots who belong to ‘dregs of society.’ How can any faithful Christian be so foolish as to fail to cast an effective vote against him?”

Who knows what is best for your children? You or leftist bureaucrats in New York, California and Washington, DC?

Will you protect your family?

Will you stop the state from taking control of your children’s mental health?

Then you must vote against Joe Biden. You must vote for the only electable candidate who will protect your right to train your child in the way he should go.

Politics in a fallen world is not easy. However, when two sinful political parties offer two visions of America and these visions are one of great good (Republican) and the other of great evil (Democrat), then our duty is clear.

Elements of Democrat policies are the very strategies inspired out of the pits of Hell. Christians have a duty to fight this. Anyone telling you otherwise is a liar.