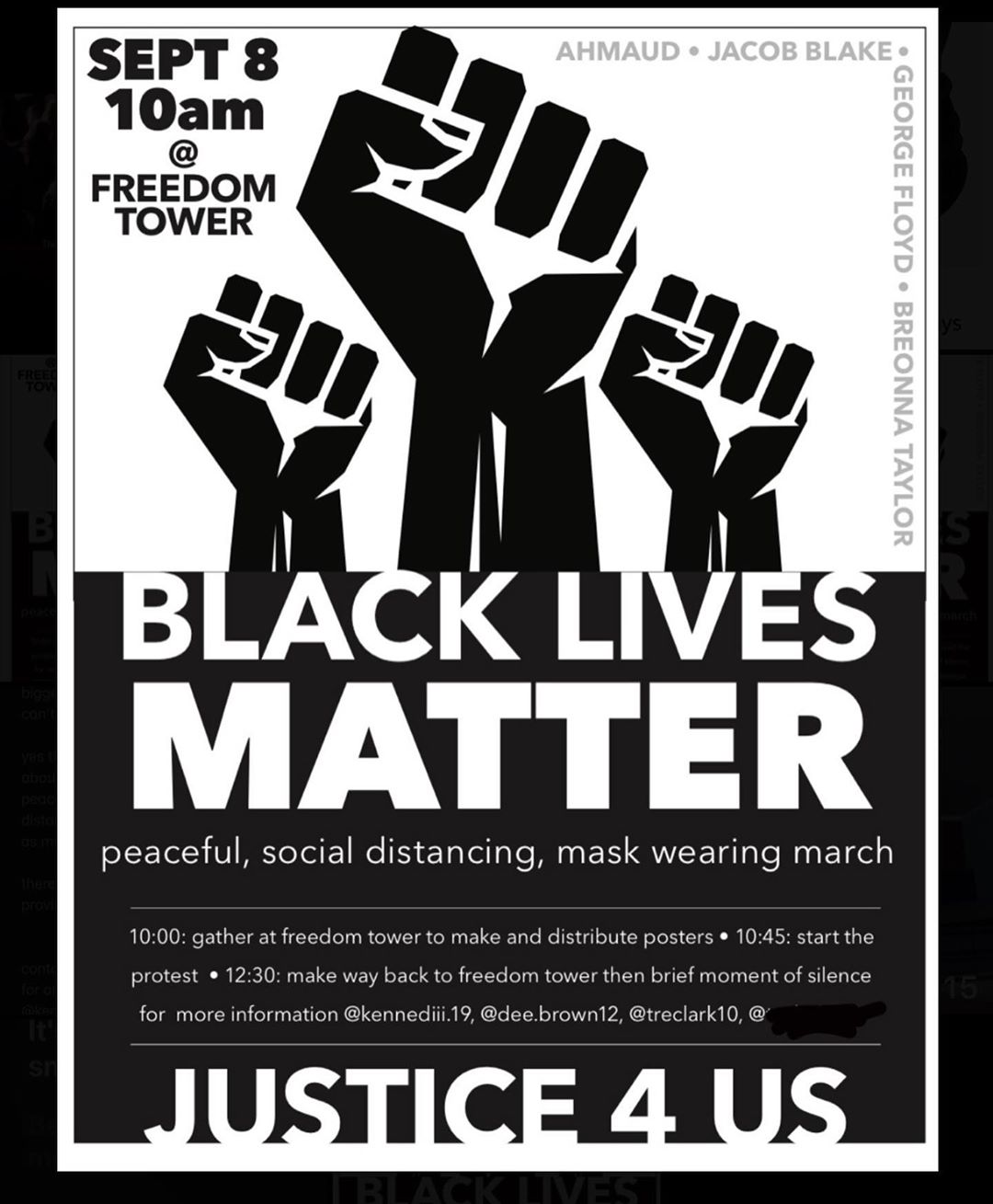 After Jerry Fallwell Jr.’s ouster as president of Liberty University, progressives are making a play to radicalize the students and conservatives worry that VP David Nasser is not a real conservative and making a bid for power at the once conservative evangelical institution.

Worries about a liberal takeover of Liberty University exploded this week with a Black Lives Matter event on the campus—an event attended by Liberty Vice President David Nasser.

A flyer for the event proudly displays the Black Lives Matter agitprop—raised Black Power fists and the names of allegedly innocent black victims of police brutality. Included in the list of names on the poster was alleged rapist Jacob Blake, who was shot in Kenosha, Wisconsin after what video evidence shows resisting arrest and diving head first into a car where a knife was found. Also on the list were George Floyd and Breonna Taylor. For a deeper diver in those cases, Ben Shapiro detailed the issues with all of these BLM martyrs. You can listen here for podcast on Blake, here for a podcast on George Floyd and here for a podcast on Breonna Taylor.

The Liberty Champion provided a different view of the event. According its reporting, the event was not a Black Lives Matter event. One organizer of the event, a member of the Liberty women’s basketball team, said, “We are not with the organization,” the paper quoted her as saying. “We are not here to protest the police or bash them in any way.”

A conservative on Liberty University’s campus disputed that version—calling it clearly a Black Lives Matter event pointing again at the posters. Then they cited an effort among university leaders to begin radicalizing new students on the campus in the Social Justice Gospel.

According to the source, a Liberty University dean promoted a Christian study of the book The Heart of Racial Justice. The book study is an attempt to radicalize young nursing students in the Social Justice rhetoric, we were told by worried conservatives at Liberty.

And a review of the book justifies that view.

On page 209, the authors assert that the Christian West has used its power to preach an “individualistic gospel” over true forms of Christianity. Instead some type of communitarian form of Christianity is promoted and preferred.

And on pp. 88-89, the authors preach an anti-corporate message claiming that White Americans “must face what people of their ethnicity have done to others” and that “Western government and corporations are the world champions of spin doctoring and spin control” and that the West pursues economic and military conquest of others around the globe.

If this book were written in 1979 instead of 2009, everyone would recognize the Marxist roots of that critique.

The core of the book teaches white people enjoy white privilege and have exploited other people groups historically. There is no nuance in this view showing the historical reality that every people group in history has done something like the authors allege—it is what the pages of history continue to show—whether the Islamic invasion of Europe reversed only by Charles Martel at the Battle of Tours or the vast invasion of the West by the Great Khans of the Steppes.

The book perpetuates a myth that only one ethnic group is uniquely evil and in need of being re-educated into a proper view of Christianity. That’s the entire problem of the racial reconciliation grift—not only some people but all people need to be reconciled because all people are sinners. Every one of us possesses the capabilities to exploit other people because we are all sinners. That’s what the Bible teaches. That’s what history shows. That’s what the racial justice scam ignores.

Looming in the background of the progressive attempt to seize control of Liberty University is the Falkirk Center. This newly formed conservative think tank features many of the brightest and most promising conservative voices in Evangelical Christianity. It is a champion for Christ and conservative values. That makes it a huge threat.

Also, the Falkirk Center is doing important work in the defense of religious liberty. It stands almost alone among Evangelical think tanks defending conservative principles like the family, free markets and the church. Compare its activities to defend churches undergoing religious persecution in the United States with the feckless silence of Russell Moore and the Woke Ethics and Religious Liberty Commission of the Southern Baptist Convention.

It is no contest. Falkirk is doing more than Russell Moore ever thought about doing.

And that is why progressives Evangelicals are determined to shutter it. For example, noted progressive Karen Swallor Prior tweeted, “In grace and love, I beg @LibertyU to defund and close @falkirk_center so as not to heap more shame on the name of Christ. I beg you.”

If anyone knows how to bring shame to the name of Christ it is the progressive Karen Swallow Prior—now a professor at notoriously Woke Southeastern Baptist Theological Seminary. Karen Swallow Prior promoted Revoice and other liberal causes. Now, she wants a conservative think tank abolished. Of note, she served many years as a Research Fellow for Russell Moore’s Ethics & Religious Liberty Commission.

Oh, and if you doubt her progressive bona fides, she’s the go-to person to attack conservative Christians by the Leftist elements of the mainstream press including CNN.

The future of Liberty University is very much up in the air. With Falwell’s sexual and now business dealings under the microscope, there is a battle for control of the university and its billion dollar endowment. As one Southern Baptist seminary after another fell to the Woke invasion, Liberty remained a safe spot for the promotion of conservative values.

Progressives are attempting to use the traditional conservative views on sex to exploit the Falwell crisis. No doubt, the allegations against Falwell are serious and made it impossible for him to continue leading the university. Despite the well-organized, coordinated mainstream press attack on Falwell, change was inevitable given the seriousness of the allegations.

And progressives never let a crisis go to waste.

David Nasser, a VP at Liberty, is popular with the students and emerged as an important voice post-Falwell. Some conservatives on campus expressed concerns that Nasser, despite his powerful story of his family’s escape from Islamic totalitarian Iran, has embraced the Social Justice movement.

Of course, some conservative supporters point toward Nasser’s record at Liberty University. His work there was criticized by liberal outlet Slate in 2019.

Nasser was lauded by Falwell as an important spiritual leader for the Liberty family. “I have never been a minister. UVA-trained lawyer and commercial real estate developer for 20 yrs. Univ president for last 12 years-student body tripled to 100000+/endowment from 0 to $2 billion and $1.6B new construction in those 12 years…The faculty, students and campus pastor @davidnasser of @LibertyU are the ones who keep LU strong spiritually as the best Christian univ in the world. While I am proud to be a conservative Christian, my job is to keep LU successful academically, financially and in athletics.”

The Falwell spiritual scandal raised the issue of spiritual leadership to a new level. Some in the Liberty community want to make sure the next leader provides spiritual guidance and models Christian virtues.

And to some that makes Nasser a logical choice.

However, other conservatives expressed concerns that Nasser is not as committed to conservative issues. One cited the Slate attack on Falwell, where Nasser is shown eschewing political conversations: “When I pressed him, he told me that he votes pro-life, although he’s more interested in helping young mothers than passing laws. He sees the world in terms of relationships and spirituality, not policy or power. ‘Maybe personally I lean towards conservative values,’ he said. ‘That’s the small c. But the big C in my life is Christianity.’”

It is hard to argue with that observation. Combine that with the radicalization of students within the nursing program and other hints—Liberty University is in danger of drifting Left just like happened to the Southern Baptist Convention.

3 thoughts on “Liberty University in Danger of Going Woke?”