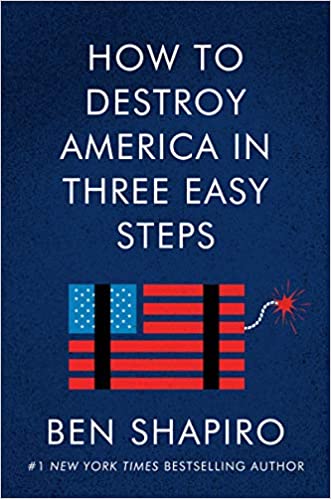 You need to read Ben Shapiro’s How to Destroy America in Three Easy Steps. It is a necessary primer for the attacks on America. If you follow our book recommendations then many of these tactics Shaprio covers were explored last year by Todd Starnes in his book Culture Jihad. Shapiro’s new work provides a needed defense of America against the acid of Neo-Marxist criticism. Criticism destroying the foundation of our country.

First, Shapiro’s book is readable. It is accessible to a general audience—this is critical to preparing conservatives to counter the false Social Justice narratives of Systemic Racism. Shapiro provides evidence against systemic racism helpfully footnoted. Shapiro points out that disparities are not necessarily caused by systemic racism. There can be many factors.

Shapiro sets the record straight. He shows that America’s history is one of striving to live up to the promises of our founding documents. America is imperfect. Yet, it is still a force for good in the world. And its focus on individual rights is what makes America so great.

One of the best parts of the book is Shapiro’s defense of free market capitalism. In this section he engages not only Leftist critiques but critiques of Common Good Conservatives like Rod Dreher and Tucker Carlson.

Part of the disagreement between these views rests on what appears to be a misunderstanding. America’s system is not a true free market. There is a strong element of Crony Capitalism and central state meddling. For example, Tesla turned its fourth consecutive quarterly profit making it eligible for S&P 500 inclusion thanks to selling “regulatory credits” based on the government’s economic policy to promote zero-emission cars.

As CNBC reported, “Without zero-emission vehicle (ZEV) and other regulatory credits, Tesla would not have been able to report a four consecutive quarters of GAAP profitability, a milestone it reported Wednesday that meets the qualifications for Tesla to join the S&P 500.”

I’m not trying to pick on Tesla. I like Tesla and Elon Musk. However, the government is rigging the economy. It is rigging the economy mostly to benefit the coastal elites and favored industries. Its policies harm flyover country workers—especially the energy sector. Federal trade policy has since our engagement with China in the 1970s favored China for geopolitical reasons (combined with a naïve hope that China would become a Democracy.) These efforts worked geopolitically but failed to reform China. It is now flagrant in its violations of human rights—and it steals billions in US tech. Harming workers and our economy.

Again, Shapiro does a great job defending free markets. However, there are reasons to critique elements of the American economy. It doesn’t work for everyone and many of its core assumptions need to be examined.

Something to ponder, not that long ago—the 1970s and 1980s, state laws forced limited commerce on Sundays. These Blue Laws are now gone despite most of them being in existence prior to the Founding of the American Republic. It might be worth pondering if these values were worth jettisoning in exchange for extended store hours, etc.

It is not wrong to ask these questions and ponder the right balance. We must be inclined to the Free Market, but let’s not deceive ourselves—government always tinkers in the economy. The question is for whom does it tinker and how limited is its tinkering?

Also, Shapiro neglects the economic realities distorting American lives. There is good evidence that Welfare policies undermined black families (see: Sowell, etc.) These economic factors certainly coincided with a family breakdown. Is it not then safe to conclude that there can be economic factors that incentivize bad behavior? If so, is this inherent in free market liberalism or something else?

In any case, Shapiro’s defense of free market capitalism is needed now more than ever since it is under attack. Plus, with Leftists leading in many national polls, dangerous Green New Deal policies loom.

The Problem of Slavery

Shapiro’s approach to the problem of slavery is to do two things: attack the disintegrationist impulse of the American South and praise the wisdom of the Founding Fathers. Shapiro rightly notes that the Founding Fathers wanted to curtail slavery and build a strong America. They were willing to compromise to build a strong America since this would ensure the eradication of slavery sooner.

According to Shapiro, “While some forty-one of the fifty-six founding fathers who signed the Declaration of Independence held slaves, many of them spoke out clearly against slavery, including many of the slaveholders themselves… Jefferson, famously a slaveholder himself and the father of children by a woman he kept in bondage, Sally Hemings—the half-sister of his first wife—spoke repeatedly about the immorality of slavery; he called it a ‘moral blot’ and a ‘hideous depravity.’ Jefferson even introduced a bill to ban the importation of slaves into Virginia, hoping for slavery’s ‘final eradication.’”[2]

Shapiro builds a strong case for this giving example after example of the Founding Fathers working to limit the expansion of slavery all while building a stronger America. Shapiro even deals with the infamous three-fifths compromise—something used rhetorically by Leftists against America, but in fact was designed to limit the power of slaveholders.

And Shapiro quotes Jefferson warning about judgment falling on America for slavery: “Indeed I tremble for my country when I reflect that God is just: that his justice cannot sleep for ever: that considering numbers, nature and natural means only, a revolution of the wheel of fortune, an exchange of situation is among possible events: that it may become probable by supernatural interference! The almighty has no attribute which can take side with us in such a contest.”[3]

Judgment of course came in some 600,000 war dead in the American Civil War. And despite the costs, Shapiro judges, “The Civil War was, in short, a vindication of the founding goodness of the United States.”[4]

And this highlights why the book is useful. It deals with the reality that slavery was morally bad and America worked hard even at the price of blood to correct it.

Shapiro’s book shows that America is special. It has flaws, but how it overcomes these flaws should make us appreciate America even more. We have the freedom to point out the failings and demand change. It was this impulse that created the Abolition Movement. It is this impulse that drives the Pro-Life Movement today.

It is because America has free market capitalism and recognizes individual rights like freedom of speech that makes it possible to fix our mistakes. If we give in to the Left and let them destroy our Constitution and its protections, then our national goals will be harder if not impossible to achieve.

If you care about America and want to preserve the best of it for future generations, then you should read this book. It is a necessary defense of the philosophy and history of America.