Prophets without honor or troublemakers? What’s the best way to view Christian blogging? Does any criticism of the status quo make one into that most dreaded of all Internet types—a discernment blogger?

Al Mohler and others attempted to silence and intimidate professional journalists. But blogs are the problem, according to one professor.

There is a move afoot to label and punish Southern Baptists who read and share Christian blogs. The proposal surfaced in a now deleted tweet by an Associate Professor at Oklahoma Baptist University. Matt Emerson leader of Baptist Renewal and most troubling of all an Auburn alum suggested a resolution against negative Christian blogs. 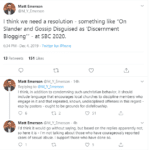 He tweeted, “I think we need a resolution – something like ‘On Slander and Gossip Disguised as ‘Discernment Blogging’ – at SBC 2020.”

Amplifying this, he wants to crackdown on pew sitters and pastors who dare to share these blogs.

He tweeted, “I think, in addition to condemning such unchristian behavior, it should include language that encourages local churches to discipline members who engage in it and that repeated, known, undisciplined offenses in this regard – esp by pastors – ought to be grounds for disfellowship.”

Wow. That is a serious crackdown on dissent.

Big Eva doesn’t want the little guy to have a voice.

Take a look at the fiasco at First Baptist Church of Naples, Florida. The little people didn’t vote for the guy the elites wanted, so, instead of dealing charitably with the failed vote, the church leadership supported by many denominational insiders spread the rumor that the culprit was Racism! Obviously, the only reason the candidate failed to carry the required supermajority was racism and a racist plot driven by church members.

Never mind the actual concerns over the candidate’s promotion of the book Woke Church, etc. It must be racism.

No evidence was supplied.

The only proof was the cry: Racism!

Now, maybe it was racism. However, before we accept that claim, we should at least ask for evidence.

But, evidence is in short supply when dealing with Big Eva and its enablers.

Why do we need evidence?

But hey, reporting and blogging I like, that’s totally not what I want banned.

For example: “I’d think it would go without saying, but based on the replies apparently not, so here it is – I’m not talking about those who have courageously reported cases of sexual abuse. I support those who have done so.” (see above screenshot for tweets).

So, only the things I dislike should be banned and condemned as sinful.

But this type of attitude is what makes the need for outside news sources critical.

For instance, what should a Christian believe about the situation at Southwestern Baptist Theological Seminary? Is Dr. Robert Lopez being persecuted? Is the administration protecting itself, the Southern Baptist Convention and its students?

These seem like important matters. Would this issue be covered by Baptist Press? The state papers?

Any Baptist journalist who does their job faces punishment.

Even when professional journalists like Joni Hannigan (a veteran of Baptist newspapers and online journalism) raise an issue, the Baptist insiders attack.

Mefferd details the attempt to silence her reporting:

“As a Christian radio host who was covering the story, I was subject to strong and uncomfortable pressure behind the scenes, which others may not have experienced in the same way.

“And Al Mohler was at the center of that pressure.

“In 2013, several months after I had been covering the SGM scandal, I was blindsided by two executives from my former radio network’s corporate headquarters on an extended conference call.

“They told me that they had received a call from ‘Al Mohler’s office’ that expressed ‘concerns’ over my radio interviews with Detwiler, who had weighed in on the class-action lawsuit filed against Mahaney and others. They communicated to me that Mohler’s office did not believe Detwiler was a good guest choice.

“Knowing that Mohler served on our company’s editorial board, I said, ‘Mohler’s office’ didn’t call you. You mean Al Mohler called you.’”

In case you didn’t know. Al Mohler is the frontrunner at this time to be elected President of the Southern Baptist Convention during its 2020 annual meeting set for Orlando.

The lesson here is that Mohler protects the good old boys of Big Eva from investigative journalists.

That’s how Big Eva does business.

One response to the Twitter proposal came from another Christian journalist who faced pressure and legal harassment from Big Evangelicalism. Julie Roys responded to the proposal in revealing fashion.

She tweeted, “As someone who was repeatedly accused of slander and gossiping for exposing a megachurch pastor who was abusing and stealing from his flock, this proposal makes me shudder. Those terms are too often are used as weapons by powerful abusers against truth-tellers and whistleblowers.”

Roys was attacked in print by one of the targets of her reporting—specifically, she details how a Christianity Today contributing editor who received a car from James MacDonald provided a venue for MacDonald to attack her reporting.

But never mind all of that.

The problem are the blogs.

We need a resolution against them

And not only them, but the pewsitters and pastors who share those inconvenient posts from “discernment blogs.”

Who defines slander and gossip? The insiders like MacDonald? Mohler? The incompetent leadership at FBC Naples?

Who even knows what a discernment blog is? I’ve been labeled that. However, I’ve always viewed myself as holding to a William Lane Craig-inspired Mere Christianity rather than viewing myself as a dogmatic heresy hunter. Yet, it appears any critique and any unfavorable opinion gets one hit with the label.

Maybe it isn’t such bad a label if it means standing up for the little guy in the church?

5 thoughts on “A defense of Christian blogging”