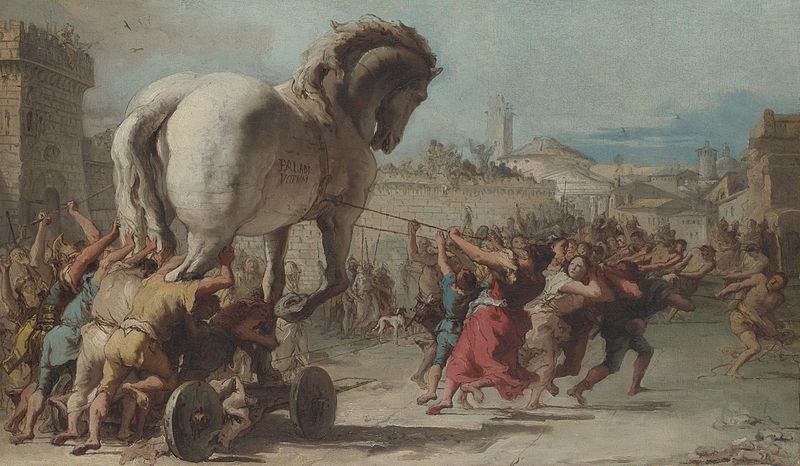 When conservative Calvinists and non-Calvinists point out the same problem, perhaps it is worthy of attention?

Is the Bible enough or must we acquiesce to worldly philosophies of Critical Race Theory and Intersectionality?

“The Argives had embarked on their benched ships and were sailing away,
after throwing fire on their huts, while those others
led by glorious Odysseus were now sitting
in the place of assembly of the Trojans, hidden in the horse;
for the Trojans had themselves dragged it to the citadel.”
–Homer, The Odyssey 8.500-505

In the just released trailer for a film exposing the infiltration of conservative Christian denominations by the forces of Identity Politics, there is an important warning.

“Many of these ideologies have been smuggled into many evangelical churches and organizations through the Trojan Horse of Social Justice,” Dr. Tom Ascol said in the trailer for the explosive new documentary on infiltration of the Southern Baptist Convention.

Dr. Ascol leads the Reformed, or Calvinistic, Founders Ministries. The purpose of the organization is for the “recovery of the gospel and the biblical reformation of local churches.”

Many years ago, in Internet years way back in 2016, Traditionalists (non-Calvinists) warned that the Neo-Calvinism of the day was smuggling in, like a Trojan Horse, many new ideas that came with baggage. Now, the context of the warnings were different and there were enormous differences of application; however, all critiques noticed the rise of Russell Moore’s political progressivism, the influence of George Soros money on Evangelical immigration policy proposals and an erosion of the SBC’s accountability to the people.

Unfortunately, many of these critiques were lost in the soteriology arguments.

What we believe about soteriology matters, but the struggle today isn’t about that. It is about the foundation of the faith: Is the Bible enough or must we acquiesce to worldly philosophies of Critical Race Theory and Intersectionality?

This is the core of the Trojan Horse infiltration.

There is a serious presence of influence by worldly philosophies, and led by Southern Baptist elites going along with it. This is analysis is affirmed by many Traditionalists and many Calvinists.

If Southern Baptists who are polar opposites doctrinally both detect such a phenomenon, it may well be worth the attention of people across the Convention.

This isn’t a call to revive Traditionalism (though, I don’t think it has gone away, but it is simply quiet.) However, it is a call for Traditionalists to not leave Founders Ministries in the gap alone.

Notice how a Trojan Horse works. As Homer explained in The Odyssey, the Trojans dragged the very instrument of their destruction into the town square. “While those others led by glorious Odysseus were now sitting in the place of assembly of the Trojans, hidden in the horse; for the Trojans had themselves dragged it to the citadel.”