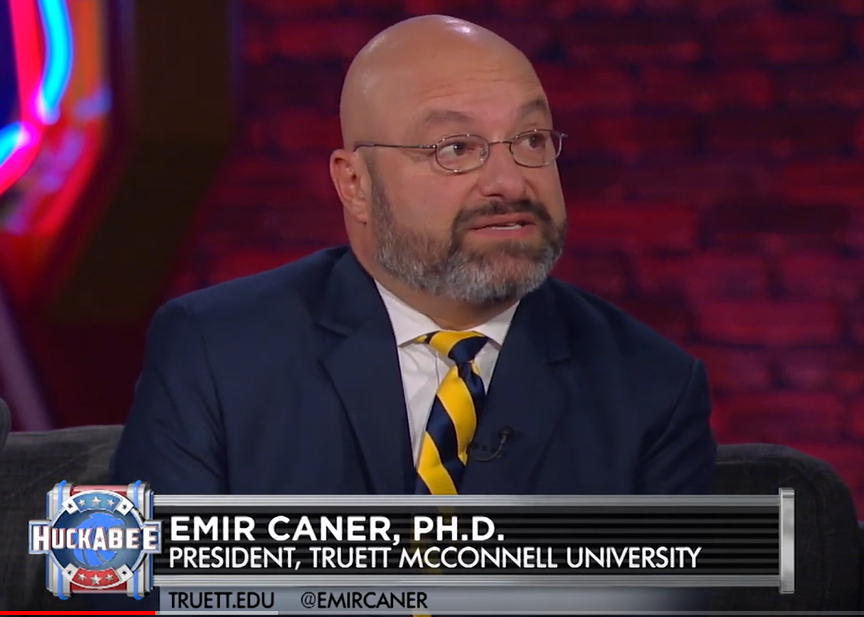 A Southern Baptist university president said the Quran is a theocratic book of principles incompatible with democracy. A former Muslim and now Christian, Emir Caner appeared on the Mike Huckabee Show this weekend. Caner is the president of Baptist Truett McConnell University in Cleveland, Georgia. Caner is also the co-author of Unveiling Islam: An Insider’s Look at Muslim Life and Beliefs.

Caner said that when Congressman Keith Ellison took the oath of office on a copy of the Quran, someone asked if that offended him as a Christian.

He said, “No. It offended me as an American.”

“You can’t put your hand on the Quran and support Democracy,” Caner said. “It is not possible. The Quran is a theocratic book and a theocratic political book.” (Scroll down to watch videos from YouTube of the Huckabee Show.)

Caner said the Quran has a direct influence on the anti-Semitic BDS (Boycott, Divestment, Sanctions) movement.

“The more literal you take the Quran, the more likely you are to become militant,” Caner said.

Caner pointed to the flow of Saudi money to fund mosque construction in the US as a driving force for the influence of radical Islamic thinking.

Caner talked about his family history, conversion to Christianity during a Thursday night revival meeting at a Baptist church in Ohio and how he and his brother penned Unveiling Islam in the aftermath of the Sept. 11, 2001 terror attacks.

“We wanted to educate Christians to do two things: how to understand Islam, but also how to win Muslims to Jesus,” Caner said. “The crucial aspect to all of this is still John 3:16, that God so loved the world, and that today includes 1.8 billion Muslims.”

Huckabee praised Caner’s administration of Truett McConnell with a quadrupling of enrollment under Caner’s direction. Huckabee said the university makes no apologies for being a biblically oriented university.

“Words are one thing, but actions another,” Caner said of his school’s commitment to the Bible. “I’d rather train 300 warriors than 3,000 wimps.”

Hana Caner joined her husband on Huckabee’s show to talk about the horrors of live under communism. Hana grew up Soviet-era Czechoslovakia. She told stories of what it was like growing up under communism as a Christian. She was told at the age of 14 that her desire to be a teacher or nurse was impossible—she was an enemy of the state as a Christian.

“Socialism destroys the country,” she said. “It is anti-freedom.” She warned that communism invariably follows closely to socialism.

She had a special message for members of the Alexandria Ocasio-Cortez and the Squad: “I’d love for her to go and live under socialism for two weeks…Once government starts telling you what you can or cannot do, then you are going to lose what America stands for,” Hana said.