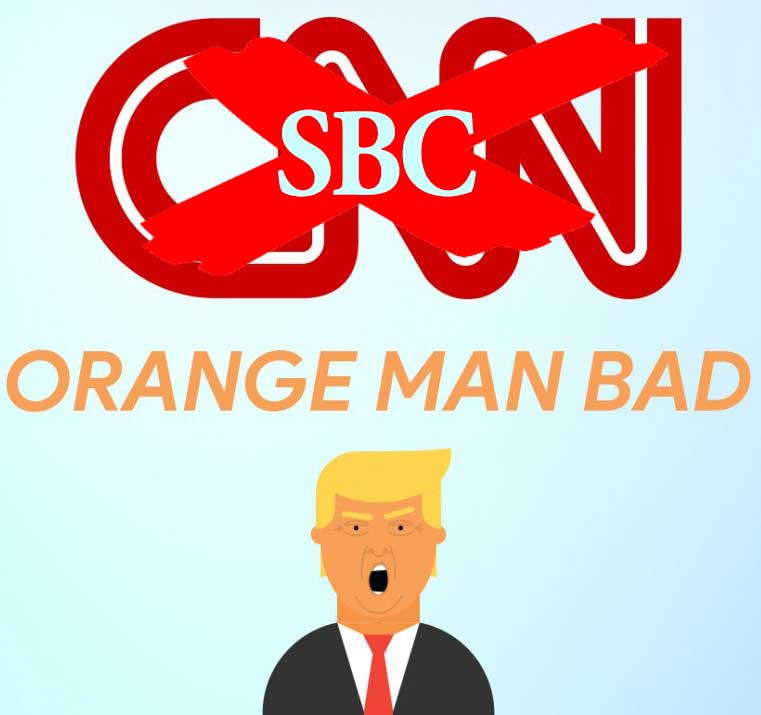 Southern Baptist elites have found their scapegoat for declining church membership—American exceptionalism, patriotism, nationalism and Christians who supported Donald Trump. Years of failures in mission strategy and efforts are now conveniently to be blamed on loving America and Orange Man Bad, according Chief Missiologist of the largest evangelical denomination.

“Mixed up in the convoluted concoction of politics and religion is a reemergence of a very unchristian patriotism,” the Southern Baptist Convention’s Chief Missiologist wrote. “Caleb Cohen reminded us that, ‘It does not take an unpatriotic American to recognize that our society has long nursed a heresy of American exceptionalism, equating our national values and interests with those of Christianity itself.’”

Loving your country is now a bad thing, according to these evangelical elites.

Loving America and voting to protect unborn life make you “toxic” to the world.

So, this means Christians must totally rebuild their political brand, according to this article in Christianity Today written by Southern Baptist missions expert Jeff Christopherson. Christopherson is Chief Missiologist of the North American Mission Board of the Southern Baptist Convention and co-executive director of the Send Institute, a partnership of Wheaton College and the North American Mission Board.

“What happens to the mission field when our highest calling is to leverage a profound cultural angst into a vitriolic nationalism?” asked Christopherson.

It explains all Southern Baptist missionary and church planting failures. It is an excuse for the fewer baptisms and declining memberships.

“The trajectory of the religiously unaffiliated continues to climb at unprecedented rates, while the great evangelical prize—political significance—will continue to erode,” Christopherson wrote. “The mission field has been torched by our own hand, and the utility of evangelical voting bloc will no longer be desired.”

“The public flip-flop of evangelicals on the importance of personal character within public office has created a tsunami of an integrity crisis within larger evangelicalism,” Christopherson alleges.

What is the evidence of this?

Oh, the perception of pro-abortion, and other secularists.

“The collective perception that public figures are held to account by evangelicals, or given a free pass, adjudicated solely on the color of the candidate’s brand is difficult to dance around,” Christopherson wrote. “The moral inconsistency of our positions only leads a watching world to conclude that our religious convictions—the essence of our faith—is up for sale.”

Christopherson engages in a great deception writing these lines. He knows we can’t control how people view our actions. One can act with the best of motives and others view the action through a hostile lens.

Further, why should a Christian voter care how someone perceives their vote? Their duty is to vote for God’s principles—and here is a clue, God’s principles are against abortion and for Christian religious liberty. How a secularist views that vote is irrelevant. We answer to God, not the fickle court of public opinion.

Christopherson’s political argument here is despicable—it is consequentialist. It makes its political judgment on what people think.

Evangelical Elites want you to vote for Democrats

Now we get to the real point of this column. Christopherson embraces the Democratic Party. You know, the party that is pro-abortion and anti-Christian? That party.

He writes, “Rather than clear alignment between evangelicals and any political party, Tim Keller suggested that believers should have some commonalities with both political parties but should be uncomfortable aligning themselves completely with either.”

Good luck finding common positions with the Democratic Party. It is committed to murder and doesn’t accept candidates who aren’t enthusiastic in support for the murder of unborn children and now even post-birth abortions.

And so, what if that results in the persecution of Christians?

All that matters to Christopherson is public opinion—opinion mostly formed by pro-abortion, anti-Christian bigots

What is going wrong in the Southern Baptist Convention that we empower absurdity like this to lead us?