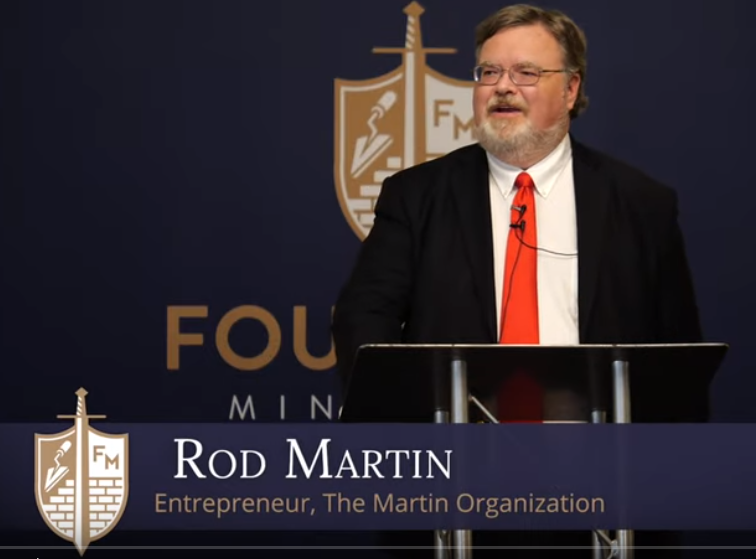 ‘It seems dark because the forces of darkness are arrayed against us,’ Martin told the Founders National Conference

Rod D. Martin encouraged conservative Christians to make a stand for the Gospel and the Southern Baptist Convention in a powerful and important presentation delivered to the Founders National Conference May 15, 2019. Martin is a Southern Baptist leader and “a technology entrepreneur, futurist, hedge fund manager, thought leader and activist from Destin, Florida.”

Martin encouraged Southern Baptists to get involved despite the challenges. Southern Baptist polity “is on its best day Byzantine,” Martin said. His advice for those seeking to safeguard the denomination, “Show up. The world belongs to those who show up.”

You can watch the entire presentation posted on YouTube. You should. Below are  a few striking items in his presentation. https://youtu.be/ZjIeCth9heU

At present, Social Justice is a concern for the clarity of the Gospel. Evangelicals are engaged in an important discussion about Justice, social action and the Gospel. Martin noted how Social Justice as used by political Leftists is a dangerous and powerful motivator.

Shame is a powerful tool, that can be used to herd people, Martin said during his presentation at the Founders Conference. Because of depravity, it is easy to manipulate your guilt and pity, Martin said.

In the presentation, Martin highlights something critical for an appropriate political theology—a good understanding of man and his sinfulness. Martin offers a perceptive critique of mankind—he will always seek power because of his depravity. It leads men to seek political power and prominence or authority within the church. Martin sketches why this led many denominations with hierarchical structures into a dangerous slide to liberalism.

In contrast is the Southern Baptist Convention’s congregational system.

“You need to love the SBC because it is accountable to the Baptists in the pew,” Martin said, pointing out the fact that the Southern Baptist Convention is the only denomination to be recovered from the control of Leftists. He praised how Baptists of the past rose up when heresy was taught; they “elected better presidents,” Martin said.

Now the time has changed and it is our turn to lead the convention.

“It is our duty by birth and by choice to steward it with all our heart and all our soul because it is His,” Martin said. “It is His for spreading the Gospel and discipling those saved. It is not perfect. Nothing is perfect. But it is ours. It is ours because he let us have it for a little while,” Martin said.

So, what must the concerned Christian do? Engage himself in the contest. As noted above, Show up. Also, prepare for the fight.

“You owe it to what you believe to learn the strategies and tactics necessary to win,” Martin said quoting Morten Blackwell. “And don’t talk to me about what you believe unless you are doing something about winning.”

One thought on “Rod D. Martin rallies conservatives to fight for the Gospel and the Southern Baptist Convention”