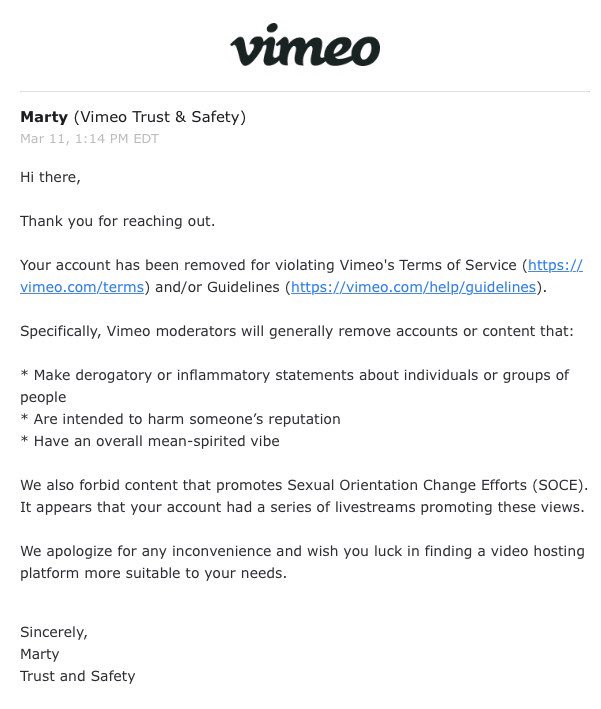 The God’s Voice Conference sessions and all other video including sermons from Fairview Baptist Church of Edmond, Oklahoma were deleted by Vimeo for violation of its terms of services.

According to AFR radio host Janet Mefferd of Janet Mefferd Live, a radio program heard across the country on American Family Radio, this is obvious viewpoint discrimination from Vimeo that amounts to an attack on the Gospel.

“This is a blatant admission of @Vimeo viewpoint discrimination, not just objections to specific content. They removed SERMONS that had nothing to do w/SOCE. They removed Christian testimonies from people who left LGBT lives. They removed other talks on Scripture,” Mefferd tweeted.

“Make derogatory or inflammatory statements about individuals or groups of people

“Are intended to harm someone’s reputation

“Have an overall mean-spirited vibe

“We also forbid content that promotes Sexual Orientation Change Efforts (SOCE). It appears that your account had a series of livestreams promoting these views.

“We apologize for any inconvenience and wish you luck in finding a video hosting platform more suitable to your needs.” (See attached image of email.)

Mefferd said this type of action is chilling to the free exchange of ideas in modern America.

“You may not care about us, but this is an attack on Christianity. Period. There was no fair reason for @Vimeo to delete ALL the church’s sermons, w/no warning or discussion. There was NO hate, insulting or ‘mean vibe’ at @GodsVoiceConf – it was about the GOSPEL! #FreeSpeech,” she tweeted.

Interestingly, Democratic presidential candidate and noted Native American Liz Warren had posts on Facebook taken down Monday. The progressive socialist tweeted, “Curious why I think FB has too much power? Let’s start with their ability to shut down a debate over whether FB has too much power. Thanks for restoring my posts. But I want a social media marketplace that isn’t dominated by a single censor. #BreakUpBigTech.”

Warren probably wants to be the censor instead of letting private companies engage in it. However, the entire episode is instructive as it teaches us that tech oligarchs will pursue policies they feel are in their own financial interests. Warren got a temporary experience of that when she urged regulation of our tech overlords. God’s Voice gets a longer (and perhaps permanent) experience because discrimination against Christians is financially rewarding in today’s America.

The God’s Voice Conference was launched in response to the liberalizing message from evangelical elites on matters of sexual ethics. With the removal of these videos, Vimeo has limited the ability of these conservative Christians to share their faith.

Christians should be worried. It is only getting worse in America.

Churches using Vimeo should be aware and consider other options if (and when) the censors come for them.