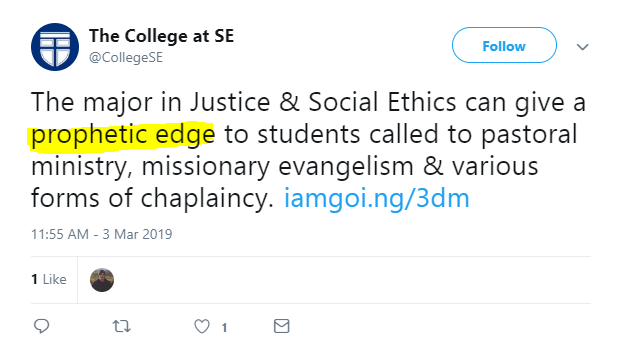 Want a job in the church of tomorrow? Then you need the Prophetic Edge™!  The Prophetic Edge™ is exclusively available from studying at ground zero for Social Justice in the Southern Baptist Convention—the College at Southeastern Baptist Theological Seminary. Southeastern has a unique program focused on making sure you get Woke enough for the future of evangelicalism:

“The major in Justice & Social Ethics can give a prophetic edge to students called to pastoral ministry, missionary evangelism & various forms of chaplaincy,” the College tweeted.

You can read more about the program’s unique course of study here.

It makes sure to cover the critical Woke subjects of race, wealth and poverty.

Why does Southeastern offer this program? Because secular universities aren’t doing enough to brainwash the next generation! Everyone must be Woke.

What better way to prepare for ministry than focusing on systemic injustices. You too can sound like Amos, or a totally confused David Platt and preach against the injustice of capitalism while tweeting about it on your iPhone.

The ministry of tomorrow needs the Prophetic Edge™ to explore controversial topics like white privilege, the evils of private property and why Venezuela is totally not real socialism.

The Prophetic Edge™ is guaranteed to prepare the ministry student to bravely condemn threats to Christianity like Donald Trump. It will equip students to write condemning op-eds for the New York Times and Washington Post just like ministry hero Russell Moore.

Oh, and what Social Justice course of study would be complete without famous guest lectures from the likes of evangelical leaders who claim all white Christians should apologize for their role in the assassination of Martin Luther King.

The Prophetic Edge™ is the way forward for evangelical Christians. In four years and 127 credit hours you too can learn to tear down all hierarchy just like other brave Southeastern graduates do in their daily ministry.

This is modern evangelicalism. It has sold its soul to the culture. It embraces all the worst elements of the secular Social Justice movement and now peddles this degree program to exploit young Christians fooled by the appeal and deceptions of Social Justice.

It illustrates evangelicalism’s embrace of marketing over substance.

It reeks of the worst sales pitch of a televangelist, or medieval simony.

Southern Baptists–that’s your tithes and offerings at work thanks to the Cooperative Program. Good with that?