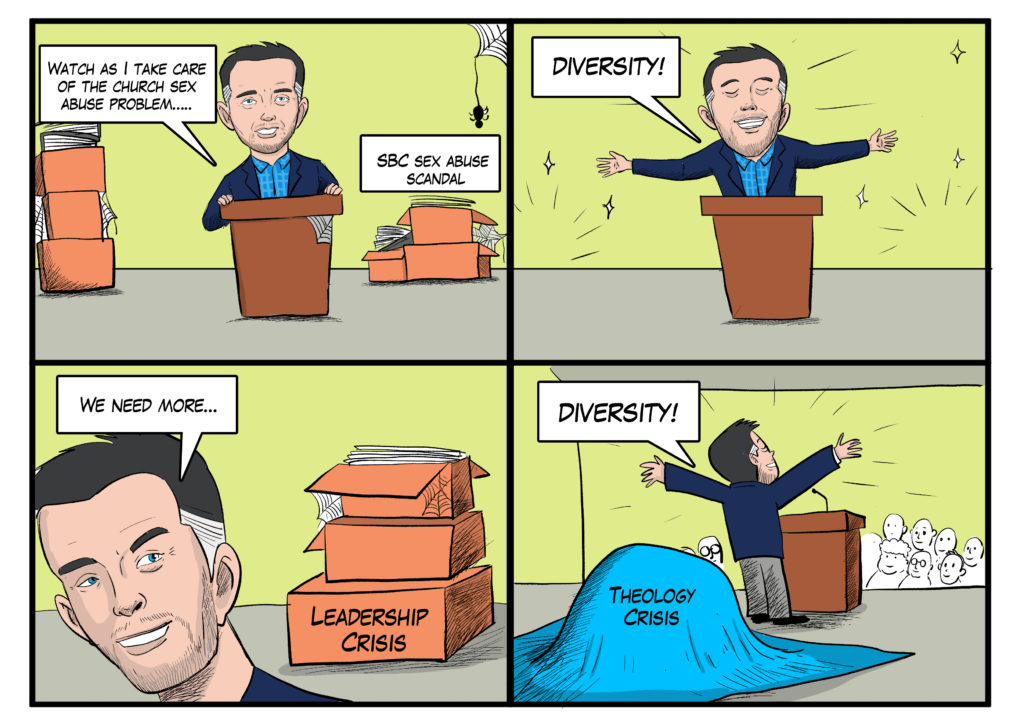 Diversity can be a good thing, but it isn’t a panacea

“Hard facts carry no such weight among politicians as magic words like ‘diversity’ — a word repeated endlessly, without one speck of evidence to back up its sweeping claims of benefits.” –Thomas Sowell

Have a problem? Just utter the magic word: Diversity. That’s the leadership style of Southern Baptist Convention president J.D. Greear. Greear’s plan for dealing with any problem is to repeat the word—Diversity—and somehow, the problem is fixed.

The problem of sexual abuse in churches? The answer? Diversity.

“Steps to address sexual abuse are being developed by a diverse study group made up mostly of women, Greear said, according to BP.

Well, there you go. If only we involve more women and minorities, the sin problem is handled.

Could it be any more Intersectional?

But it doesn’t stop there.

Southern Baptist Convention president J.D. Greear appointed a Committee on Committees that signals to the secular world just how proper the Southern Baptist Convention is. The committee is all about diversity. It’s the coolest way to virtue signal to the world the capitulation of the SBC to Intersectionality and Critical Race Theory. How hip. Too bad that’s not the Christian way.

The SBC is over 80% white and about 6-8% black, according to Pew. The Committee on Committee’s composition over-represents blacks by 300-percent (24% of the Committee on Committees) Hispanics and Asians, and significantly under-represents whites—only half of the committee. Here is BP’s report on the committee’s demographics. And here is the data from Pew Research on the SBC’s demographics.

This commitment to the magic of Diversity fits the parable of the greengrocer.

Dreher quoting Kirchick: “To explain the stultifying effects of Communism on the individual, he relates a story of the greengrocer who puts a sign in his shop window proclaiming, ‘Workers of the World, Unite!’ The grocer doesn’t believe the Marxist credo. Rather, he displays the sign ‘because everyone does it, and because that is the way it has to be. If he were to refuse, there could be trouble.’ The sign, Havel writes, conveys the following message to passersby and society at large: ‘I, the greengrocer XY, live here and I know what I must do. I behave in the manner expected of me. I can be depended upon and am beyond reproach. I am obedient and therefore I have the right to be left in peace.’”

We are the new SBC. We behave in the manner expected by our new Intersectional overlords. We can be depended upon and are beyond reproach. Please leave us in peace.

Only, you won’t be left in peace.

As soon as you bend the knee, you are his. Quotas will only beget more demands for diversity. Women SBC presidents. Women pastors-elders. The progressive commissars won’t stop until every uniquely Christian worldview element melts away, and the church reflects the progressive zeitgeist.

Today reverse racism is demanded, and that’s what the SBC’s elites must virtue signal. Only that’s not justice. That’s pleasing the secular world. For a more Christian view of justice and how Christians should understand it, watch this excellent video of Dr. Voddie Baucham lecturing on the topic and the false distraction of secular Social Justice.