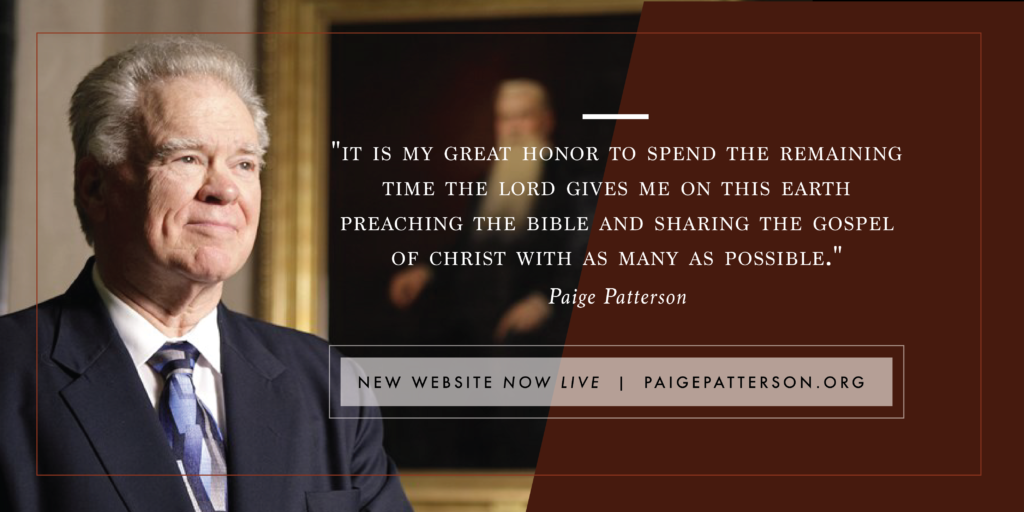 Paige Patterson says the Southern Baptist Convention is in time of upheaval caused by generational conflict and Social Justice Movement;
Patterson spent 3 weeks in hospital since ouster at SWBTS

Dr. Paige Patterson said the Southern Baptist Convention is in a time of upheaval. The warning came during an interview on the Janet Mefferd Live radio show on American Family Radio Wednesday. Patterson cited a generational conflict (young versus old) and the Social Justice movement as catalysts for the SBC’s upheaval.

The 76-year-old Patterson said the Social Justice Movement appears to focus on issues that typically are not a major emphasis for evangelical Christians.

The great error of today’s Social Justice Movement within evangelicalism is its focus on legislating this social justice, Dr. Paige Patterson said. Patterson said such an effort will fail. Christ must bring about regeneration. He said, that for real justice to be achieved in a state that “you need something that comes from God to change hearts.”

A substantial part of the interview examined how the Board of Trustees acted in ending Dr. Patterson’s presidency of the seminary. It is worth listening if you have the time as Dr. Patterson was on the show for an entire hour. The most important news involved Dr. Patterson’s health. Some time after his ouster as president of Southwestern Baptist Theological Seminary (SWBTS), Paige Patterson fell ill and spent three weeks in the hospital.

The illness prevented Dr. Patterson from speaking out or doing much of anything to respond to his ouster over the last few months.

“I was really not able to speak to anything,” he said. “I just tried to get well.”

Dr. Patterson indicated he is feeling better and is very busy with new ministry work in the United States and around the world.

Paige Patterson thanked his supporters and even his attackers. He received support from many people, some whom he had never met. He said their support “was a great help in a time of deep hurt and deep sorrow.”

Patterson credited his attackers for helping him to “seek (God’s) face and to do better and better” even though the last episode was painful. “God meant it for good,” Patterson said.

Patterson told his supporters that there is reason for concern and encouraged supporters to “let those concerns develop and seek God’s face evermore, and let’s see this thing turn around for the glory of God.”

Where is the Southern Baptist Convention heading?

“My fear is that (Southern Baptists) will be less and less involved financially and otherwise in the mission programs of the Southern Baptist Convention,” Patterson said.

Patterson’s hope grows out of God’s work in history. “God has a way of bringing his people back, and that is what I hope–the future will be brighter than ever,” he said.

The wide-ranging interview examined the MeToo Movement and its influence in evangelicalism.

The increased scrutiny of the MeToo movement, Social Justice Movement and attacks from bloggers make it where any pastor could have elements of their sermons either taken out of context or misinterpreted, Patterson warned.

The entire interview can be found at Janet Mefferd’s website. Worth taking the time to listen if you missed the live broadcast.