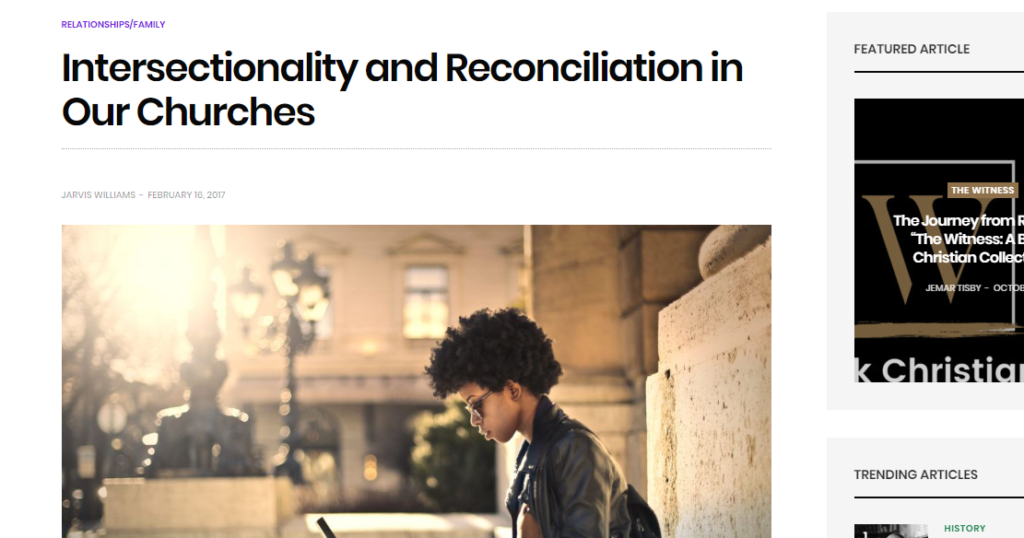 A prominent evangelical writer and seminary professor’s essay on Intersectionality has disappeared from The Witness website. Professor Jarvis Williams of Southern Baptist Theological Seminary has written on the topic of race and evangelicalism for many years. Most of his posts remain at The Witness (over 100), but an important essay on Intersectionality returns a 404 error.

He claimed in the essay, “Humans are not born with a blank slate or with equal opportunities. They are born as either male or female. Then they are socially constructed as either white majority or ethnic minority (and some are even reduced to other) and forced to identify as a racialized group. Their identities may open the door for some opportunities, while precluding them from others.”

Why does Intersectionality matter?

According to Sovereign Nations, “Intersectionality was originally coined in 1989 by Kimberlé Crenshaw, a political activist and radical feminist, in order to describe oppression against women on specific different points of intersection. Today, it’s used in a more broad sense. In short, intersectionality as it has been defined, is discrimination based on overlapping layers of individual classes of discrimination…Although this term was birthed out of a radical feminist political culture, it’s now being used within evangelical circles to describe people who are oppressed and ‘held back’ from certain advancement within evangelicalism.”

The disappearance of these posts raises interesting questions. Why have the posts disappeared now that major evangelical thinkers like John MacArthur, Phil Johnson and others have voiced concerns about the dangers of Neo-Marxist thinking on the Gospel?

Were these posts removed to prevent embarrassment for Dr. Al Mohler and his Southern Baptist Theological Seminary?

Why has Dr. Mohler allowed scholars promoting Intersectionality, Critical Race Theory and other Neo-Marxist errors to serve as faculty at the flagship Southern Baptist seminary?

Is this a result of Dr. Mohler’s association with and leadership in The Gospel Coalition?

Will Dr. Mohler and SBTS repudiate Intersectionality as a danger to the Gospel?