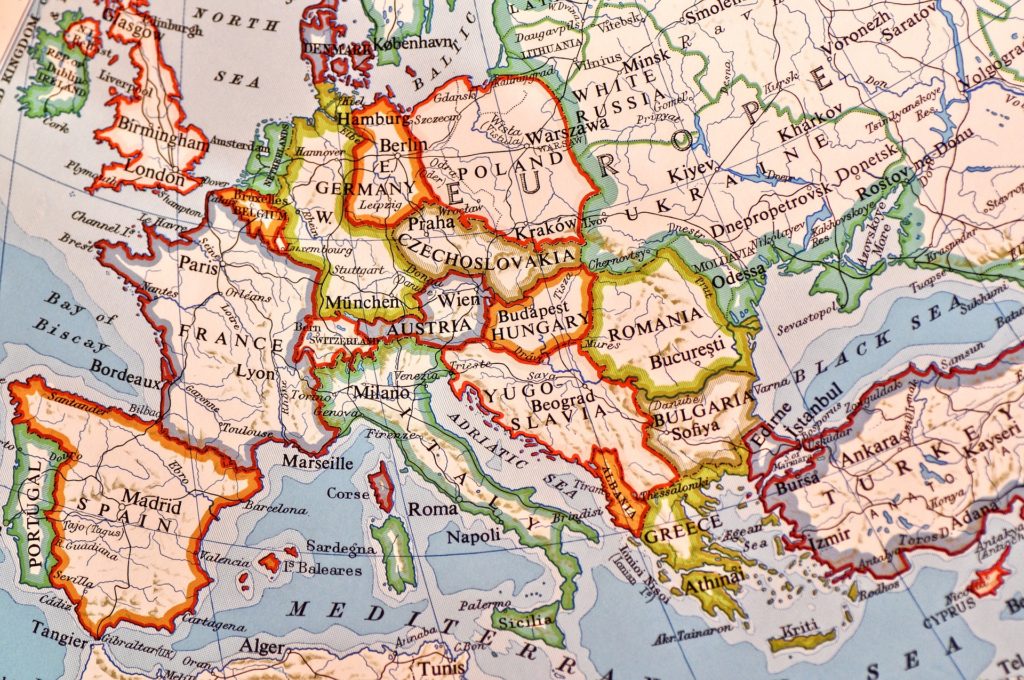 The VP for Communications of the Southern Baptist Ethics and Religious Liberty Commission (ERLC) tweeted out an attack on conservative Fox News host Laura Ingraham—the tweet featured a retweet of a writer employed by an anti-Christian progressive organization. Daniel Darling’s attack on Ingraham over immigration included Andrew Lawrence of the progressive Media Matters organization–a group funded by George Soros. 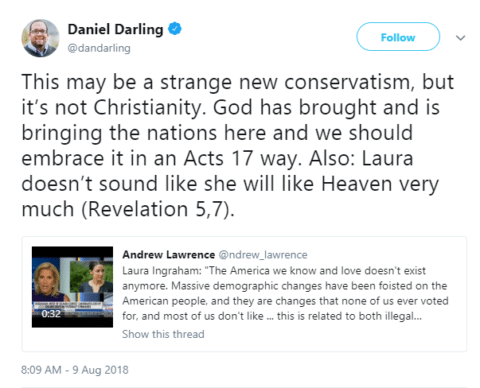 Darling’s retweet declared Ingraham as someone who was advancing a strange and un-Christian agenda. He tweeted, “This may be a strange new conservatism, but it’s not Christianity. God has brought and is bringing the nations here and we should embrace it in an Acts 17 way. Also: Laura doesn’t sound like she will like Heaven very much (Revelation 5,7).”

This nonsense (more on that below) prefaced the Media Matters employee’s tweet. Media Matters is a progressive organization supported by George Soros and founded by Clinton flunky David Brock. According to Lifesitenews, “Leftist billionaire George Soros has supported the organization with millions in donations since its birth in 2004, though he didn’t go public with his support until 2010.”

Want more info on the Soros topic? Sovereign Nations has a podcast and supporting documents detailing Soros meddling in Christian groups. It exposes how progressive money has coopted conservative Christian organizations and leaders.

Theological malpractice at the ERLC

Beyond Darling’s promotion of the anti-Christian Media Matters, was the theological nonsense contained in his re-tweet message. Darling misapplies both Acts and Revelation texts.

It isn’t shocking. The ERLC has a long history of being wrong about immigration. Its president, Dr. Russell Moore, lied about Jesus and called our Savior a “so-called illegal immigrant.”

Ingraham’s monologue was anathema to these progressive Christians because she pointed out the manner in which immigration has circumvented the democratic process.

“In some parts of the country, it does seem like the America that we know and love doesn’t exist anymore,” Ingraham said. “Massive demographic changes have been foisted upon the American people, and they’re changes that none of us ever voted for and most of us don’t like.”

The ERLC’s Darling provided yet another example of how progressives play fast and loose with the biblical text. According to the ERLC employee, Acts 17 (you know, the text praising God’s ordained boundaries for the nations) was an attack on borders.

Doubt Acts 17 was about borders? John Calvin had this to say about Acts 17:26, “But God doth testify in this place by the mouth of Paul, that it was appointed before in his counsel how long he would have the state of every people to continue, and within what bounds he would have them contained.”[1]

Need more? Deuteronomy 32:8 provides a nice way to interpret Acts 17:26 (you know, letting Scripture provide the guidance for how to read Scripture), “When the Most High gave the nations their inheritance and divided the human race, he set the boundaries of the peoples according to the number of the people of Israel.”[2]

According to one commentator, “The more obvious background to the notion of dividing peoples into various racial and political entities is the so-called Table of Nations of Gen 10. This sets forth the distribution of the human race following the debacle of the Tower of Babel (cf. Gen 11:8–9; 10:2–31), the most reasonable occasion for the division spoken of in our poem. The verb translated ‘divided’ (pārad) occurs likewise in Gen 10:5 to speak of the separation of the race into lands, languages, clans, and nations, and it also occurs in Gen 10:32 in a statement summarizing the divine distribution of peoples throughout the earth.[3]

What progressive Christians fail to understand is that conservative Christians can affirm that all mankind is descended from one man, and at the same time believe a nation should have borders. Borders that further its national interest.

One of the best systematic theologians of today explained that a government must seek the good of the people under its God-given administration.

“Another important consideration from the Bible concerns the general responsibilities of governments to seek the good of the nations that they rule (Rom. 13: 1– 7; 1 Peter 2: 13– 14) and thereby truly serve as ‘God’s servant for your good’ (Rom. 13: 4). This means that the immigration policies of a nation should be designed to bring benefit to that specific nation.”[4]

One last problem with the ERLC employees tweet is the appeal to Revelation 5 and 7 to attack Ingraham. A Christian can affirm that after the Parousia all peoples become united under Christ, and at the same time affirm that we cannot and should not attempt to immanentize the eschaton.

Christians should approach politics with a combination of confidence and humility. We can be confident that God controls the affairs of men and nations. We must be humble in admitting our insights to politics are limited. As Luther said, the Holy Spirit isn’t here to provide us with tips on government. As such, we should be careful to apply the Bible accurately. The ERLC and its employees show they are irresponsible in their application of Scripture and Southern Baptists can’t trust them. The ERLC and its employees have more in common with anti-Christian groups like Media Matters than with Southern Baptists who voted for border security.

That is sad. But that is what your Cooperative Program money supports.

[4] Wayne A. Grudem, Politics – According to the Bible: A Comprehensive Resource for Understanding Modern Political Issues in Light of Scripture (p. 471). Zondervan. Kindle Edition.