You’ve heard this one before, it’s just taken different forms. You also hear the term “A true Auburn man.” That term is loosely assigned to virtues like honesty, hardwork and honor.

A funny thing happened in Alabama baseball’s SWEEP of the Auburn Tigers in their own Plainsman Park this past weekend. Following Friday/Saturday victories over the favored and #23 ranked Tigers in their own backyard, the Tide arrived to the park on Sunday to find the doors locked. Literally.

Reportedly, as is customary for road teams, the Bama staff sought to use the Tigers batting facilities to ready themselves for the Sunday finale to the weekend series, but the facilities were locked. When Tide coaches complained to Auburn head coach Sunny Golloway, they were met with a flurry of words you’d never say in front of your mother…and on Mother’s Day of all days. 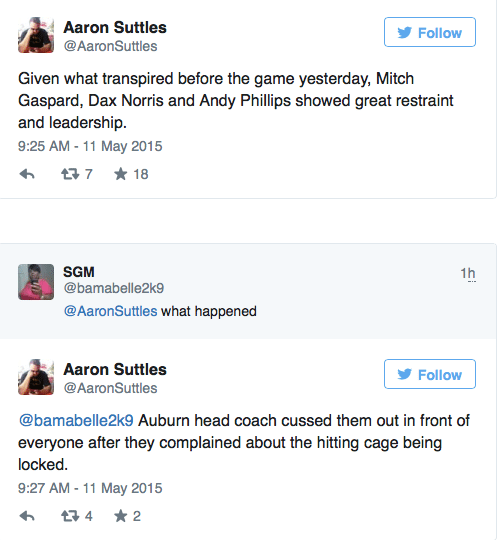 Bama ripped the Tigers’ hearts out with a late inning 4-2 win in game one on Friday night, which featured back-to-back homeruns to secure the win. This was followed by a dramatic 7-6 win on Saturday afternoon. So when Bama went for the sweep on Sunday, Golloway apparently had other ideas in mind.

And this after Saturday’s game, where Bama first-baseman Chance Vincent had to be taken from the field on a stretcher by ambulance following a scary collision with a teammate.

No, Coach Golloway’s plan was very different. Was it instead to show extremely poor sportsmanship, denying his opponent access to adequate facilities so they’d be ill-prepared for the game? Sound familiar? Sadly, we’ve seen this kind of strange occurence on the plains before.

Last fall, knotted at 21-apiece with Arkansas, the Hog coaching staff was mysteriously unable to join their team at halftime because the pressbox elevator “got stuck”. In 2009, on the eve of the Iron Bowl, internet chatter began circulating about a possible staged accident to delay the Crimson Tide from arriving at Jordan-Hare Stadium on time. Sure enough, the next day it happened, delaying the Bama buses from arriving to the stadium by almost an hour.

Last fall I talked to a former Bama player who echoed thoughts on playing in Auburn. From his experiences, he was suspicious. Petty stuff like no hot water in the dressing room and other annoyances seemed to be the norm when playing there.

So with this latest offering of pettiness, is Coach Golloway a true “Auburn man?” Yes, it appears that he is.

What a true Auburn man APPEARS to be is someone who knows they can’t compete on a level playing field, so instead of reaching down and working harder than their opponent, they employ lazy, petty gimmicks to try and find an edge.

You know, things like running an offense in football built on trickeration, Tom Foolery, and snapping the ball before the officials are in place. Or hiring a basketball coach the NCAA had to ban for a period of time because he was a pronounced cheater. Or the same organization having to change recruiting rules so that a father can never shop his son “without his son’s knowledge” ever again.

This story is just another in a long line of stories that prove that it is ANYTHING but great to be an Auburn Tiger. The fact is, everything on that cow pasture continues to stink.

That is, except for the 14-4 drubbing the Tide later handed Golloway in thanks for his gesture, completing the sweep of Auburn in Lee County…their first in 32 years.

Weegle, Coach Golloway. Better get the ole resume ready. The Auburinites you answer to don’t like getting their rear ends handed to them by big brother.