With the conclusion of another A-Day game in Tuscaloosa, the Crimson Tide put a wrap on its 2015 spring practice, thus opening the door for rampant speculation in the months between now and fall camp.

Both supporters and detractors will look at last Saturday’s scrimmage game and become engrossed in the discussion concerning Bama’s strengths and weaknesses. Afterall, Bama lost 60% of its offensive line to graduation. Not to mention a Heisman runner-up and its most prolific passer in decades (at least in terms of single-season stats).

But is it really that deep? Can you really take away anything from A-Day? If your quarterback throws a volley of touchdowns, does that mean he’s that good, or does it mean your secondary is terrible? When the most explosive player you have on offense dons a black, no-contact jersey, can you really determine anything about your running game? And when 8-9 starters or contributors don’t even participate, what really can you glean?

Here’s what I did take away.

Bama’s defensive line is ridiculous. This defense is totally built to stop the LSU’s, Arkansas’ and Georgia’s then turn around the next week and stop the silly, sissy offenses like Auburn and Texas A&M. Show me a deeper front four/five in college football.

Likewise, the linebackers have star potential. It’s just dumb to draw comparisons to the 2011 unit, but you can see hints of that kind of talent all over the field. Reggie Ragland plays the part of Dont’a Hightower, and plays it well. But the fear factor for opposing offenses will be Reuben Foster. Good grief it’s criminal how hard he hits people. Denzel Devall, Shaun Dion Hamilton, Dillon Lee, and surprise freshman Keith Holcombe are more than able to plug into the mix. And with Bama’s depth on the defensive line, and versatility at defensive end (with quick-twitch rushers like Rashaan Evans and Tim Williams), the Tide’s front seven will be more than a challenge.

The secondary is finally returning to form. Eddie Jackson at safety just makes sense, and does early enrollee, freshman Ronnie Harrison. Very seldom does a player step on the field and look the part, but Harrison looks and plays like a junior. Cyrus Jones will secure one corner spot, with more than enough candidates ready to take the other. Geno Smith, Bradley Sylve, Marlon Humphrey, Maurice Smith, Hootie Jones and (my favorite) Tony Brown step in to round out the defensive unit, making it potentially as good as any we’ve seen in the Nick Saban era in Tuscaloosa. 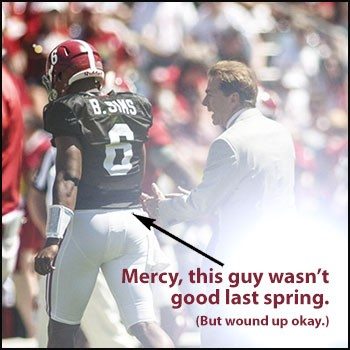 On the other side of the ball, there is reason for concern. Last spring, Blake Sims left the A-Day game as the clear favorite with a solid, impressive performance that left every Alabama fan breathing easy.

Last spring, Blake Sims was terrible in the A-Day game, leaving Bama fans hungering for transfer Jacob Coker. I would argue that Coker and freshman David Cornwell looked better on Saturday than Sims did in the game a year ago. All Sims did was go on from there to break almost every single-season passing record at Alabama under the tutilege of Lane Kiffin, who upon last check is still wearing his signature long-sleeves on the Bama sideline. Whoever emerges as the starter will win the luxury of having that same tutilege, with the best offensive mind in the game today calling the plays for him.

Coker showed signs of promise, though his slow delivery is a concern. But then again, Tim Tebow had the slowest wind-up I’d ever seen at the time. He was pretty good in college. Cornwell showed promise as well. The game isn’t over, but conventional wisdom is it’s a three person race, with Alec Morris or Cooper Bateman taking the third spot. Neither Morris nor Bateman seemed to separate themselves from one another in Saturday’s scrimmage, while freshman phenom Blake Barnett showed he has a future, but needs time with Scott Cochran.

At runningback Derrick Henry looks to be the man, flanked by the playmaking abilities of the Drake. Tide runningbacks coach Burton Burns has to produce a third back, however for the rigors of SEC play. Ronnie Clark looked the part, but after that it gets sketchy. The suspension of Tyren Jones and the injury to Bo Scarborough left its mark on the Tide’s backfield. Someone’s got to step up, be it Clark, DeSherrius Flowers or the incoming Damien Harris. Someone will have a grand opportunity for carries in upcoming season.

I don’t know if you know this or not, but the Tide receiving corps took a hit last season losing Amari Cooper and DeAndrew White. However, Robert Foster showed Saturday why he was considered a top prospect out of high school. He could draw comparisons to the impact of another #8 in recent history at Alabama. Fultondale’s Adarius Stewart is simply a playmaker, primed to take a leading role in the Tide’s passing game. The same is true for Chris Black, who some said was as good or better than Cooper before an injury sidelined him. Look, it’s Auburn-esque delusion to suggest anyone on the Tide’s roster is better than Amari Cooper, but it’s equal orange and blue wishful thinking to think there aren’t playmakers all over the field, because there are. Raheem Falkins, Derek Kief and incoming Calvin Ridley and speedster Daylon Charlot will provide plenty of options, as well as Cam Sims when he’s able to return from injury.

On the offensive line, Bama did lose 3 out of 5 starters. But they return the two most important in Cam Robinson (left tackle) and Ryan Kelly (center). With the vanilla playcalling and blocking schemes typically employed in a spring game, and facing the best defensive line in college football, this one is the hardest to call. But, I’m not losing any sleep over it. 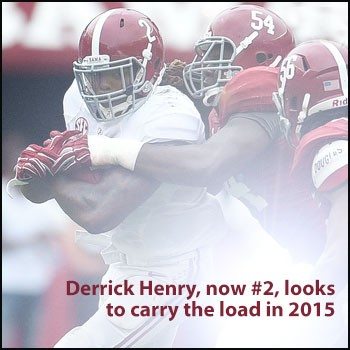 On special teams, JK Scott could (and probably should be allowed to) be punting in the NFL right now. Adam Griffith connected on a couple of kicks, but lost footing on another, while shanking yet another. It’d be nice to get that part of the unit shored up before the Tide’s trip to Athens next October.

All in all, what I saw from the spring game is about what you see from a spring game. Glasses half full and half empty all over the field. The best I’ve ever felt after a spring game came in 2013. Bama fell horribly short for a threepeat. The worst I’ve felt about a spring game in the Nick Saban era was last spring. Bama went on to become the first ever #1 seed in the first ever college football playoff.

So who knows. I do know this. In 2015 the Tide will be dang good once again, and it’ll take every team they face everything they have to beat them, regardless of where that game is played. And, as a Tide fan and alum, that’s the kind of panic I’m glad we don’t have to worry about.