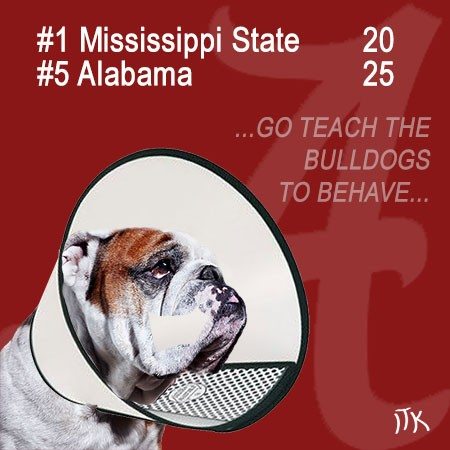 The Alabama defense hassled and handled Heisman Trophy Candidate and Mississippi State quarterback Dak Prescott early and often as the Tide taught the Bulldogs to behave, once again.

Still, a late Bulldog touchdown made things interesting, requiring a DeAndrew White onside kick recovery to seal the 25-20 victory, the Tide’s 9th of the 2014 season.

“Obviously, it was a great win for our team, our players, our fans, our university and everyone in the organization,” said Alabama head coach Nick Saban. “I think anytime you beat the number one team in the country, that’s a significant accomplishment. I was really proud of how our players competed in the game. I thought the defense did a fantastic job. The turnovers were huge with the three interceptions. They were all drive stoppers.”

Offensively, Bama was limited by a stingy, physical Bulldog defense who showed why they were unbeaten coming into the contest. But Amari Cooper again showed why he is the best receiver in America, making a clutch 2nd quarter touchdown grab and adding another 49-yard circus catch, setting the Tide up at the goal line.

Alabama never trailed in the game, with Alabama linebacker Trey Depriest earning the game’s first point by dropping runningback Josh Robinson in his own endzone. Adam Griffith would add a 36-yard fieldgoal. With Cooper’s 4-yard 2nd quarter touchdown grab, it was clear Mississippi State would be playing from behind the rest of the game, something the Dogs haven’t done much this season. State outscored Bama 17-6 in the 2nd half, a fact that only matters if they aren’t trailing by more than 11 at the end of the first half.

With the 25-20 finish over the top ranked Bulldogs, it’s certain that Alabama will make its first appearance in the College Football Playoff Committee’s top four this week. Unlike some, who boasted about dipping their toe in the poll three weeks ago when it didn’t matter, with two weeks left in the 2014 regular season, now it does.

• Alabama has now beaten the Bulldogs seven years in a row. The Tide owns the series, leading 77-18-3 all-time.
• The Tide owns the best winning percentage against the AP #1 team, dating back to 1936. Bama is 7-4 all-time against the top team, a 64% winning percentage.
• Alabama is 17-5 against the AP top 10, dating back to the start of the 2008 season, the dawn of the “new” Alabama under Nick Saban.
• Alabama receiver Amari Cooper surpassed the 3,000 yard mark for his career in receiving yards in the 3rd quarter of Saturday’s contest. He already holds the record for yards in a career, passing DJ Hall in last week’s win at LSU. Cooper finished the Mississippi State game with eight receptions for 88 yards, improving his career total to 3,039 yards.
• Next up for Alabama are the Catamounts of Western Carolina, a kick-off set for 3:00 p.m. CT. The SEC Network scheduled to televise the game.
• Prior to next Saturday’s game however, all eyes will be on the unveiling of the College Football Committee’s new top four this Tuesday night, where Alabama is expected to ascend from its current No. 5 spot in the NCAA Playoff rankings.