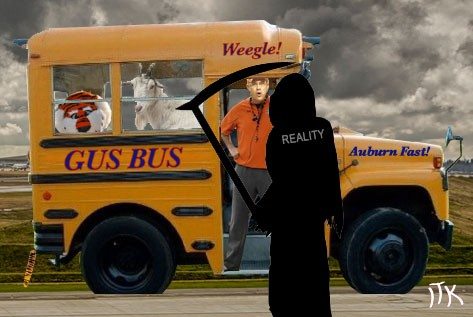 The University of Auburn lost in dramatic fashion to the Georgia Bulldogs on Saturday night in Athens, severely damaging the Tigers’ hopes of making the new college football playoff.

Losing 34-7, the College Football Committee may have to take a hard look at the Tigers’ body of work this season, possibly excluding API from the newly formed playoff system that will determine this season’s college football champion.

With the loss, the Tigers drop to 7-3 on the season, falling short for the second week in a row. Auburn is now licking its wounds amid a two-game losing streak, but Tiger fans are still optimistic.

“I believe in Auburn,” said one Auburn fan outside a restaurant on Birmingham’s Southside on Saturday night. “And love it. The committee will too, because when it’s time to choose the four teams, they’ll also agree that it’s great to be an Auburn Tiger.”

“Auburn is the awesomest team in college football. Got a second? War Cam Eagle!”

While it’s uncertain how the committee will react to the Tigers’ third loss of the season, it is certain that Auburn won’t have to worry about playing that pesky game in Atlanta following the Iron Bowl. One fan from Opelika agreed.

“Now we can get ready for the four team playoff without the distraction of that dang SEC Championship game. That’s just one more game to worry about injuries, or where you might have to show your hand and such. We can get ready and focus on who we’ll play in the first round, depending on the seeding.”

“Gus Malzahn is a high school coach employing a high school system,” said Justin, a bartender from Hoover. “It was only a matter of time before the Gus Bus ran out of gas. Somewhere Terry Bowden is jumping up and down in his footed pajamas, screaming ‘I looked like a genius down there for a little while too!'”

“27 points? Are you kidding me? Auburn got beat by 27?” said Charlotte, a nurse at a downtown hospital. “When have you ever seen Alabama lose by 27 points, to anybody? Heck, the worse loss Shula ever took was by 15. I guess that means Mike Shula is better than Gustav!”

It’s unclear what the newly formed committee will do, but with #4 TCU barely surviving on the road against lowly Kansas, and #1 Mississippi State falling to #5 Alabama, Nick Saban’s 5th victory over a #1 ranked team in his tenure at Alabama, the #9 Tigers will have to wait and see where they’ll be placed when the committee convenes and announces the new poll on Tuesday.

“I want to be #4,” said Sheree, a homemaker from Gardendale. “Any higher and we’ll have a target on our back. Yep, #4 is plenty enough for us to make another run to the big game!”