Former Alabama coach Gene Stallings would say, “If you don’t think games like these are important…try losing one.”

And Stallings knows.  He lost his debut in 1990 to some guy named Favre who spelled his name weird and made Tide fans feel weird about their new coach.

Paul “Bear” Bryant, whose birthday is today, suffered a tie in 1981 and a loss in 1982 to the Golden Eagles.  In 1981, the year Bryant broke the record for all-time coaching victories, Southern Miss tied the Tide with help from a bone-headed time out call by Alabama. 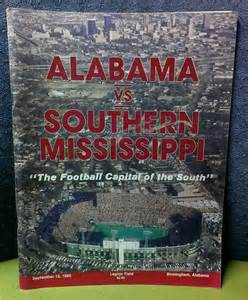 Southern Miss was losing 13-10, backed up deep in its own territory, with no time outs.  With a great Reggie Collier at quarterback, the Golden Eagles moved the ball in field goal range.  With seconds to play, Southern Miss was scrambling to spike the ball when somebody on the Alabama side made the time out mistake and gave the Eagles a more relaxed field goal try which was successful.

In 2000, Southern Miss put on a defensive clinic at Legion Field, blanking Mike Dubose’s Tide 17-0 without scoring an offensive touchdown.

Southern Miss has fallen on hard times of late.  It has won two games since 2012.  The Golden Eagles were 0-12 in 2012.  They beat UAB in 2013.  They beat Alcorn State last week, after losing to Mississippi State 49-0 in Starkville the first week of the season.

Odds makers are giving Alabama a lot of cushion this year.   The Tide is favored to win by 40 points or more depending on your preferred “bookkeeper.”

Nick Saban has said his team needs to focus on little things, execute better, and “be the beast.”

Saban pointed out that his team faltered several times in the red zone against Florida Atlantic.  He said his team can’t afford to do that routinely and expect to keep winning.

Alabama probably still wants to play vanilla and “workmanlike.”  Who knows if we will see more passes to tight ends or more elaborate defensive schemes?  Saban has said he wants more fundamentally sound football, wrapping up tackles, using proper blocking technique, and having receivers run correct routes.  If he gets his wish, Alabama will likely win comfortably.

The last time Alabama played Southern Miss was in 2005 when Tide receiver Tyrone Prothro made the famous “Most Awesome Catch of the Century.”

Alabama doesn’t always beat Southern Miss.  But the most interesting things in the world sometime happen when these two programs play.  Let’s hope this Saturday will turn out to be a winning, but mostly forgettable experience. 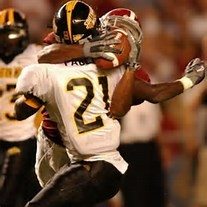