For the fifth time in the Nick Saban era at Alabama, the Crimson Tide took its show on the road…or more accurately, to a neutral site…to begin the 2014 season. Like all the others, Bama walked away from a dome with the win to begin the new season, leaving behind a few unknowns heading into 2014.

The final score was 33-23, but how did the Tide really do? We’re glad you asked. 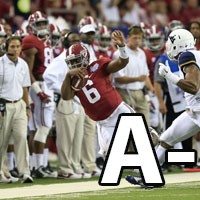 The biggest question heading into the game was at quarterback. Most thought 5th year senior Blake Sims and newcomer Jacob Coker would split reps throughout the game. That didn’t prove to be the case. Sims got the start and got a definite start on winning the job for the year.

Sims wasn’t perfect, but he was good. 24 for 33 for 250 yards good. Those numbers included a few miscues, including an interception. But overall, in a game where the Tide had two different 100-yard rushers, the coaching staff trusted Sims to sling it 34 times. Hence, he wasn’t throwing because Bama had to (to catch up), but because it was part of the plan. Factor in a sure touchdown that was dropped by the normally sure-handed Christion Jones, and his day would’ve been an eyelash from 300 yards passing on the day. Not a bad day for a first start.

The game was the first time the Tide had broken in a new quarterback in three seasons. The last one? AJ McCarron against a much weaker Kent State inside the friendly confines of Bryant-Denny Stadium. Compare Sims’ numbers against McCarron’s 14 for 23 day (226 yards, 1 TD, 2 INT), and you have to say Sims passed the test. Room for improvement? Of course. But his performance was everything we had heard he had been displaying in practice. Thank goodness.

I still think we’ll see Coker soon, but either way 2014 is in capable hands with #6. 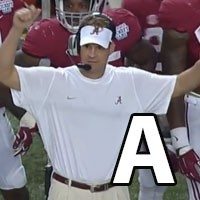 Lane Kiffin. He’s here, and he’s in charge of the Tide offense. Over the summer Bama installed its own version of a no huddle attack. The result in week one was a significant edge in time of possession…a must against the HUNH…and a balanced attack (288 yards rushing, 250 yards passing).

Kiffin is the proud owner of well-earned criticism over some immature moves in his young career. But the guy is a good coach, with a chance to learn under the best until he gets his next opportunity.

As mentioned, his quarterback threw for 250 yards, not a bad outing in any game. But he also had two different 100+ yard rushers in T.J. Yeldon (132 yards on 23 carries, 2 TD’s) and Derrick Henry (113 yards on 17 carries, 1 TD). And as mentioned, Sims wasn’t slinging it because he had to. The Tide’s offensive line was doing its job, creating holes for the Tide running backs, meaning the 34 attempts were part of a plan. A plan executed well enough to get a young team out of the starting blocks and on its way. 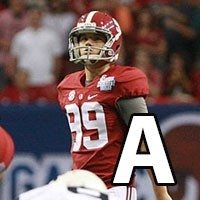 One of the biggest needs for improvement heading into 2014 from 2013 was the Tide’s kicking game. I don’t have to remind you of what I’m talking about.

Adam Griffith was outstanding, going 4 for 4, with three of those beyond 40-yards. Not to mention, actually kicking the ball into the endzone on kick-offs. That alone is reason for a hallelujah.

But JK Scott…good grief. His first punt was a 62-yard rain maker. Scott finished with a 50-yard average on the day. Incredible numbers from the freshman Nick Saban called “a weapon” this summer. Former punter Cody Mandell was outstanding, but his absence isn’t yet being felt, and may not be until Scott is done in 2018.

Okay, there was the West Virginia kick-off return. I’m not talking about special teams as a whole here. I’m just talking about the two guys getting their school paid for to kick footballs when the pressure is on, and so far I like what I’m seeing. 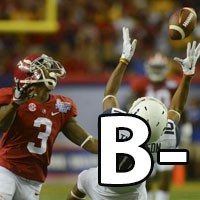 Next, I’ll grade defense as a whole. This is a tough one. On one hand, the Mountaineers moved the ball through the air seemingly at will. Trickett’s 365 yards through the air can’t become a trend. But factor in that he could only lead his team into paydirt one time, and the picture begins getting clearer.

You can win all kinds of football games yielding just one touchdown to the opposing team’s offense, especially a HUNH team. HUNH proponents love to say Nick Saban’s weakness is this cheap brand of football. That’s like saying gnats are the weakness of a UFC Champion. The HUNH is designed to level the playing field for teams that don’t want to (or can’t) win playing man football.

So far the only teams able to top Saban with this dipsy-doo, trickeroo bullcrap is Auburn (twice), Texas A&M (once) and Oklahoma (once). That’s four losses in 8 years at Alabama to HUNH teams, and only the Sooners didn’t have to depend on out-of-body, freakish, planet-aligning occurances for it to happen. With those numbers, you have to be pretty desperate to award yourself hope that the HUNH is Saban’s weakness. By saying that, what you’re really saying is Saban’s Bama can’t totally dominate some HUNH teams, ala Notre Dame 2012. What the HUNH does is give you an improved chance. However, it hardly gives you insurance of any kind. But, I digress…

Against West Virginia, the Tide defense recorded 3 sacks with its defensive line alone…unheard of in the last couple of years in Tuscaloosa. Unless it happened when I was in the restroom, I don’t remember seeing Bama blitz against West Virginia.

Now, pass coverage from one particular cornerback needs to improve, and I mean quickly. But #3 was on the field as much as he was because #4 is still recovering from knee surgery. Safety play has to get better as well. But Landon Collins will flat out kill you. If the defense begins taking on his identity, and that of A’Shawn Robinson and Jarran Reed, this defense could get nasty by the time SEC play gets underway. 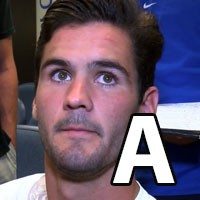 I have to include Clint Trickett’s hair in this week’s grade. The West Virginia quarterback was obsessed with removing his helmet as fast as he could when leaving the field. Dude would rip that lid off quick as a cat so we could all see his Pat Riley. Trickett had a good day, but whatever hair product he uses to keep his hair perfect inside a football helmet begs for product endorsement as soon the NCAA gives him the green light.

All kidding aside, I thought at one time it was a penalty if you took your helmet off on the field. Goodness knows CBS’s Gary Danielson tried to make it an issue after Mt. Cody’s 2nd block of a 2009 Tennessee field goal attempt. It must not be anymore, because if Georgia Power could somehow devise a way to generate power from Trickett ripping his own helmet off, there would’ve easily been enough juice to light the Georgia Dome alone. 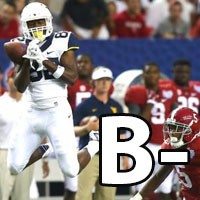 Finally, West Virginia as a whole. As mentioned, the HUNH is designed to keep weaker opponents in games longer, and it did its job against Alabama. For the next two weeks the Mountaineers get to lick their wounds against the likes of Towson and Maryland. The true test will come September 20 when the Sooners come calling. Oklahoma doesn’t lose that game, but how close West Virginia keeps it will tell us a lot about this team.