I went to the annual A-Day game, and let me say, there is much to be concerned about. As many fans do (correctly), conclusions are now being made about Alabama’s upcoming football season. Based on this scrimmage that’s open to the public, I can tell you, Alabama will not win a game in 2014.

There are problems are all over the field, but we’ll start with the obvious one: Coaching. Alabama head coach Nick Saban walked all over the field all game long. This is a man who is supposed to know the game of football, and yet there he was, traipsing all over the turf like he was a player or official. In a game, he can’t do that. This was supposed to be a simulation. Hardly. And he wore a suit and tie. Tell me one Alabama head coach who wore such and won at the Capstone?

Then there is quarterback. If you thought the Tide had someone just as good as AJ McCarron, Bama’s recently departed 37-4 starter, I’m afraid you’re wrong, compadre. Blake Sims played like a quarterback who has never started a single game. And Cooper Bateman, my word. Played like a redshirt freshman getting his first significant playing time in front of a stadium full of people. And the other quarterbacks, Alec Morris, David Cornwell and Parker Mcleod…in their limited action it was almost like they thought they were playing against players from 2011’s, 2012’s, 2013’s and 2014’s top recruiting classes.

Yeah, I know Jacob Coker is coming this summer (and was at the game), and from all accounts he’s already the man. But still, you never know if Coker might have a change of heart and decide to stay at FSU and back up last year’s Heisman winner for the next two years. If so, Bama is screwed.

The running back situation is what’s so puzzling. Not one time did a back break a long run for a touchdown. Every time they touched the ball, some thick, fast linebacker was popping him like there was no tomorrow. One linebacker (Reuben Foster) hit a guy so hard he gave himself a concussion. Still, Alabama’s offense only works when there are tough, physical bodies able to go four quarters in the Tide backfield, and between TJ Yeldon, Jalston Fowler, Derrick Henry, Kenyan Drake, Altee Tenpenny and Tyren Jones, I just don’t see it. 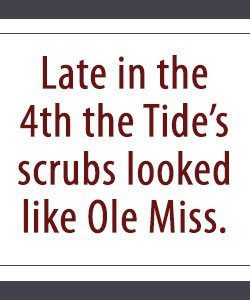 Another gripe about running back, at other A-Day games I’ve been to, by the fourth quarter you usually get to see some pasty kid you’ve never heard of toting the mail. You know, a walk-on with no name on the back of his jersey, maybe not even a white stripe down the center of his helmet. This A-Day? Nope. I had heard of every player, since they were all top, highly sought after recruits from past No. 1 signing classes. Whereas in the Shula years late in the A-Day it looked like a high school exhibition game, late in the 4th the Tide’s scrubs looked like Ole Miss.

Then there’s just the offense as a whole. Sure, there are wide receivers everywhere. Robert Foster wore #8 and looked like a past #8. Big and physical. But heck the final score was just 17-13. I long for the day when our offense gets to line up against a shallow, injury depleted 2nd unit and unload 58-points on them for a feel-good, public relations frenzy kind of afternoon. That’s showing whatcha got. Not playing your ones against ones.

After the game TJ Yeldon said the Bama offense went about as basic as you can get, only using “about 10%” of the Tide’s playbook. Former quarterback AJ McCarron in an interview said the same thing. But I don’t care. It’s not like the Tide defense is filled with top players that everyone in the country wanted…players with a high football I.Q. who’ve seen the Tide offense in practice day after day after day. You would’ve thought at least once a Bama defensive back would’ve been beaten badly in a broken coverage for a crap touchdown pass. I mean dang it, I didn’t see one out of position all day.

My biggest gripe had nothing to do with the game. Check out these prices at the concession stand:

I seriously told the lady at the window I wanted her to find something sharp…anything she had…and point it at me as I handed it over. I mean heck, doubling the regular cost of these items my tab would’ve been a healthy $15.

And if your final total comes to $XX.50 and you pay with cash, you’re getting one of those big, honking 50¢ pieces back. You know, the one you have to convince the next person you try to use it on that it’s real money. But, I digress…

Real concerns included special teams. Every single time a kick coverage unit ran on the field they had these yellow things on their helmets. That’s not part of the Bama uniform, and our special teams coach had better get that under control between now and West Virginia. Our punting was so bad it made me wish we had one of the top punter/kickers coming in this summer from the 2014 recruiting class.

All in all, after watching A-Day, we had just better hope Nick Saban figures it out this spring/summer, going into fall practice. Afterall, the man’s track record of knitting stellar football teams together, built on unreal recruiting, just isn’t that good.

But my money isn’t on that happening. This was as bad an A-Day game as I can remember. In recent memory, the only ones that compare were 2009’s, 2011’s and 2012’s. Here’s hoping for a better season that followed those exhibitions.