Alabama Athletic Director Bill Battle has a plan. I get an email from him every week telling me so. It reads more like a report than a plan, and from the looks of things, all seems to be going pretty well in Tuscaloosa.

For instance, his last email told me:

Men’s Golf is currently ranked 1st in the country.

Gymnastics is currently ranked 4th and in prime position for another National Championship.

Baseball is back, fresh off a series win over Auburn, ranked 9th.

So is Men’s Track.

And yet, for many, all they can think about is the two “money” programs falling short in their last seasons. To many, this is the feeling: 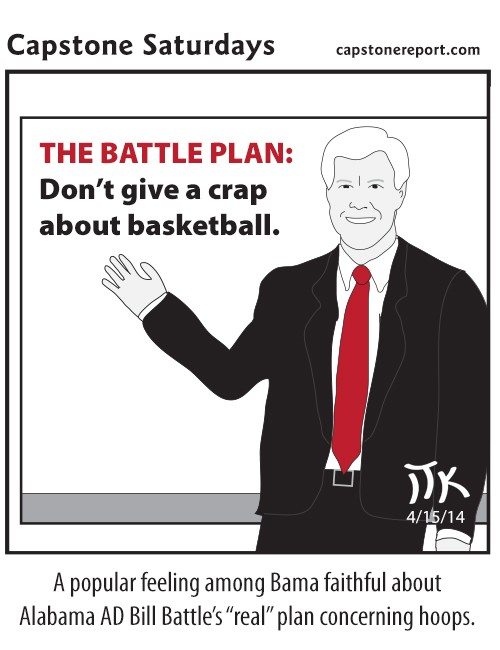 Alabama basketball is in the worst shape it’s been in in decades. It is certainly as bad as it has ever been in my lifetime. Once thought to be the worst coach in ages, somewhere David Hobbs is sending Anthony Grant thank you notes for erasing his dismal place in Bama roundball history.

This happens every year at Alabama. Players leave. I recently heard that nationally the average for departures is around 40%, and in reality the Tide falls within that range. But for a program that fails annually to reach anything remotely close to competitive basketball…and by competitive I mean reaching the NCAA Tournament, not just chalking up a feel-good win every now and then…these departures look bad. This ain’t Kentucky, where players are leaving to get paid. This is Alabama, where players are running from something.

Then there’s football. Don’t even get me started. It still makes me grin to think of the lamenting and gnashing of teeth over an 11-2 year, fresh off three National Titles. This with another “down” 10-3 season sandwiched inbetween all the hardware.

These are still the best of times in Tuscaloosa, from a football perspective. Recruiting at Alabama is just stupid good these days. The success of other programs in our region of the country fails to move the needle on the wave upon wave of top talent sprinting to suit up in the Mal Moore Athletic Complex every year. We are still the game everybody circles on their schedule. No one ever overlooks Alabama. Visiting stadiums fill up because Alabama is there, as fans of other programs hope to get a glimpse of Alabama’s head coach, Nick Saban.

Teams celebrate improbable wins based on miracles like there’s no tomorrow, probably because there won’t be. Whereas in Tuscaloosa, there is almost a guarantee that when the dust settles in late November, the Tide will once again be in contention. Not occasionally, or a flash in the pan. Every stinking year.

So what is the “Battle Plan”? Frankly, I have no idea. Bill Battle seems to be a good guy. I disagree with his lackadaisical approach to basketball. Anthony Grant has been given proper time to build something more than the Crimson sandcastle he’s constructed, to the tune of $2 Million annually. But all in all, if you’re complaining about much else in Tuscaloosa, you’re just looking for something to complain about.

As a kid I used to be perplexed about the story in the Bible of Moses leading the nation of Israel out of captivity in Egypt. They were slaves there, under the harsh rule of King Pharoah. Slaves, working for someone else’s dime. Then God comes along, frees them through a series of miracles, sending them on their way in amazing fashion. And yet, they couldn’t be happy. God split the freaking Red Sea, then crushed their captors from Egypt in hot pursuit of them under a wall of water, and within days of escape they’re whining and complaining all over again. God even dropped breakfast from the sky when they had nothing to eat…every day, for crying out loud. But eventually this wasn’t good enough. And to top it all off, when Moses comes down from the mountain, the Ten Commandments in hand, there they all are, worshipping idols they’ve built instead of the God who delivered them. And I mean days…not years…after He made way for their freedom.

As an Alabama fan, I sometimes feel like we’re the “Children of Israel” of college football. How much better can it get? Are we to win it all every season? Certainly that’s the goal. But come on man…is it going to happen? And as a whole, isn’t our program firmly planted as one of if not THE best in the land? Certainly the best in the state and/or Southeast. If you’re filling in the blanks at home, regardless of a misstep here and there, that answer is “yes”. And yet, we complain, while so many others would love to see their program string together the kind of years we’re taking for granted.

I think Bill Battle’s plan is simply this: Don’t screw anything up. It’s pretty good right now, but can be better. The only area that really needs improvement is indeed basketball. Bruce Pearl arriving across the state will ultimately do us favors, in one way or another. Until he gets caught cheating again, the temperature on the hardwood will be turned up to the point that Grant will either be forced to rise to the occasion or be forced out.

We’ll see. But until then, I’m not building any idols. I’m happy with what we’ve got.