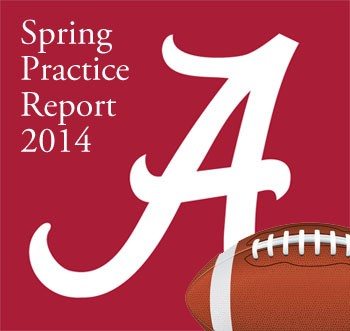 Alabama completed its second day of its 2014 spring practice on Monday; according to linebacker Trey Depriest, a new attitude is permeating the team.

“Guys are just a lot more hungry,” senior linebacker Trey DePriest said Saturday. “We didn’t finish the season like we wanted to. Guys knew that and they just took a different approach to it, and are trying to get back to the standard to how we do stuff.”

ESPN’s Monday Sportscenter feature “Rebuilding Bama” featured DePriest and receiver Amari Cooper, where the players talked about the need to connect with one another off the field as well as on.

In the weeks leading up until spring practice Alabama head coach Nick Saban has praised the Tide’s “focus” throughout its offseason conditioning work, specifically pointed toward the Crimson Tide’s “new attitude.”

• AJ McCarron’s younger brother Corey McCarron has been seen lining up in the Tide backfield in the “H-back” position. A tightend, it appears the younger McCarron may be making the transition to this spot.

• Is Bama’s next quarterback on campus yet? Blake Sims, Alec Morris, Cooper Bateman, Parker McCleod and David Cornwell are working in groups Saturday and Monday. However, FSU transfer Jacob Coker set to join the Tide this summer. All but Sims were highly touted as prep players (Sims was an “athlete”). Watching this quarterback battle will be more than interesting.

• As expected, OL Chad Lindsey is not participating in spring drills, planning to transfer. Walk-on safety Jai Miller and reserve tightend Harrison Jones aren’t listed on the spring roster either.

• After just two practices, freshman corner Tony Brown is already looking the part. Desperately in need of a shut down corner (or corners), it appears Nick Saban has him another one. Saban could be heard praising Brown on the practice field.

• When CJ Moseley is drafted this April, Saban will have had a linebacker taken in the 1st round in four of the last five NFL drafts. The cubbard appears full for future drafts with DePriest, Denzell Devall, Reggie Ragland, Dillon Lee, Xavier Dickson, Ryan Anderson, Shaun Dion Hamilton, DJ Pettway, Reuben Foster, Tim Williams and Walker Jones. This talented bunch will of course be joined by Rashaan Evans, Keith Holcombe and Christian Miller in the fall.

• Leon Brown and Cam Robinson have been seen doing work at left tackle.

• Receiver DeAndrew White has been in a black non-contact jersey dong conditioning work.

• Some jersey changes and reveals: