Before the now dead “10-second rule” it was clear the nation was terrified of Nick Saban. But now that it has passed, that fear has resonated in some obvious ways.

…say that last statement out loud, and just for a second fantasize that your program is in that position, be it ever so hard to visualize…

…a lot of tongues have been wagging on the airwaves, on twitter, and other places a safe distance from Nick Saban.

The latest was Oklahoma assistant Cale Gundy, displaying the predictable lack of professionalism and fortitude with this tweet: 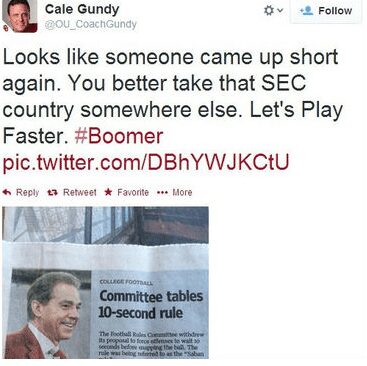 The tweet was deleted within the hour, soon followed by this one:

Admittedly, Nick Saban lost the PR campaign of public good will over the “10-second rule,” which has been falsely assigned almost exclusively to him by lazy coaches like Steve Spurrier.

But then again, in case you’ve been in a cave the last fifteen or so years, Nick Saban doesn’t do his business in the media.

He does his business ON the media.

Whereas other coaches resort to twitter and tossing zingy one-liners to hungry mediots itching for the day’s sound byte, Nick Saban methodically goes about his plan, building, and rebuilding the nation’s healthiest football program.

This was evidenced again just this past February, when the nation’s top recruiting class again chose to call Tuscaloosa its home. Top players at every position simply devestated by the way 2013 turned out.

When he succeeds, he wins it all. Something he has done three times in Tuscaloosa.

When he fails, he goes 11-2. A far cry from the 3-9 and zero SEC victories some programs have to endure.

That, apparently, is cause for the intense fear that manifests itself through premature endzone dances over a perceived crack in his Crimson armour.

Personally, I smile every time I see more mud slung in the direction of the Tide’s head coach, especially over any fantasaical “fear” he has of the hurry-up offense. Though statistically a falsehood, by poking the lion in its cage you’re only doing the Bama nation a favor.

This isn’t a man who hasn’t figured this offensive gimmick out. It’s a man whose team didn’t execute the plan that was in place, and a few exceptional athletes on the other side of the ball making plays.

When you win, you get all the spoils. When you lose, you get all that comes with losing as well…which in this case are fans, opposing coaches and the multitudes of Nick Saban haters jumping on the rare opportunity to celebrate at his expense.

But even the most delusional fan in the world…and there are many in this state…has to understand the need to celebrate while they can.

And that’s fine. Just keep telling yourself that what happened in 2013 was the new normal, and that the man who is fed by personal motivation from failure is finally down for the count. Tell yourself this, that is, if it makes you feel better.

But just like me, you know the truth. Stars aligning and miracles happening aren’t exactly the insurance I’d want when looking ahead to future success.

I prefer the greatest mind the game has seen since Paul Bryant. And that man, regardless of your fantasies about him, still resides in Tuscaloosa.