The classic move by the Aubuhn Fambly is to deflect. Just listen to their talking heads. Instead of owning up to the travesties being committed on a daily basis against the family of Rashaan Evans, the immediate response is not to admit their sin, but to deflect.

You’ve heard it. “You bunch of Updykes. You wanna see crazy fans, what about that guy in the Krystal. Cade Foster… Blah, blah, blah,” clutter from the past while a family in the here and now is enduring hell. But then, it’s easier that way. That way you don’t have to own up to the fact that your “Fambly” is closer to a mob than the 700 Club you want us to believe it is.

The Rashaan Evans story is finally starting to get traction, with an article in yesterday’s Atlanta-Journal Constitution…and finally in the Alabama media as well.

At the time of this article the story is making headlines nationwide, both on CBSSports.com with several other sources, and now ESPN as well. 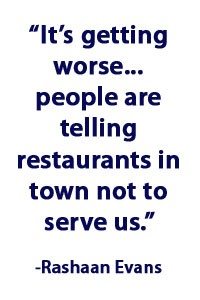 As Evans told TideSports.com “”It’s getting worse. Someone actually put out an article about my family’s business telling all Auburn fans not to go there. We are going to eventually start losing money. People are telling restaurants in the town not to serve us.”

As the AJC article points out, former Auburn High School teammate Reuben Foster is now in the controversy. A key in recruiting Evans to Alabama, the two will be teammates next season.

“Auburn fans are saying I am going to ride the bench, and I am going to be like Reuben Foster,” Evans told Tidesports.com. “People are adding his family and how they are low-lifes. They talk about his mom. You wouldn’t think some of them are human. I knew it was going to be horrible. You know it’s out of hand when people come up to you saying stuff. People you don’t know. People who are grown men.”

Grown men. Did you hear that, people? Grown men are coming up to an 18-year-old kid and making disparaging remarks to him. 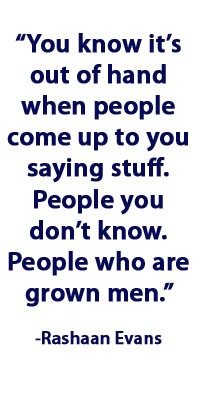 My question is, where is the Auburn leadership? Do they condone this? Their mouthpieces sure do. I thought Jay Jacobs and Gus Malzahn were godly “Auburn Men,” and Kristi likes to speak in churches. I guess it’s a long way for word to spread from Toomer’s Corner to the athletic offices. Maybe they haven’t heard about any of this.

The truth is, if their fanbase can inflict hell on a kid to the point that the next recruit from the area hears the words, “Remember what happened to Rashaan,” it seems that the Auburn leadership is just fine with what’s going on.

Want proof? You can always hear it by listening to the Auburn mouthpieces. From the same AJC story, Auburn mouthpiece Justin Hokanson has to offer a lame comparison from a lowly regarded Auburn recruit that isn’t even close to Evans’ situation.

Evans says support from Alabama fans “has been by far the greatest,” but the negative feedback he is getting on social media has been nasty.

“People on Instagram are telling me how they hope I tear my ACL in game one,” Evans said. “They will laugh when I do. They are saying my family is horrible and how they didn’t raise me right. It’s just crazy.”

Here’s a few samples for you…

No doubt this treatment of the Evans family has reached dangerous proportions, and someone from Auburn should speak up on their behalf now. I’ve said it here over and over, and I’ll say it again.

An organization will never rise above its level of leadership. Where is Auburn’s leadership? And Auburn fans, we thought you were a shining beacon of light on a hill? Why not instead of casting stones and bringing up stories from the past you be an example to us, show us your greatness, and lead the way by putting this treatment to an end?

Until you do, we’ll be right here, letting the world know who you really are. 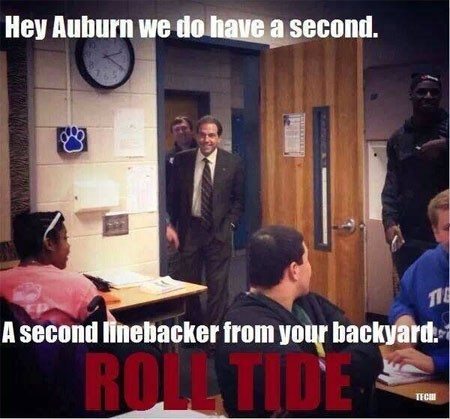 38 thoughts on “Rashaan Evans: “I’m being treated like I’m Satan.””