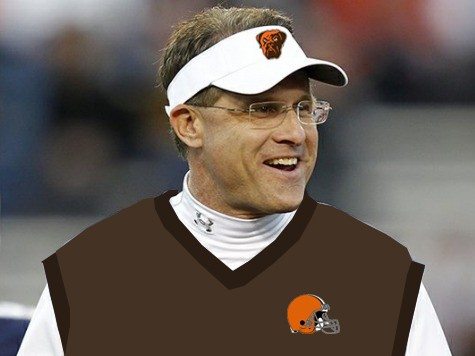 The Gus Bus is pulling out of Lee County, at least that’s what many are starting to believe. Reports from Ohio have Gus Malzahn as the leading candidate for the Cleveland Browns’head coach opening, where he would be free to hire his own staff.

Malzahn’s cinderella 2013 season and success in his only season at Arkansas State has raised the eyebrows of many NFL and college programs. His book and instructional video entitled Hurry Up No Huddle: An offensive philosophy has been used by some NFL coaches. Reports have salary talks beginning in the $5 Million range.

Malzahn’s agent Jimmy Sexton has strong ties to Browns general manager Mike Lombardi dating back to Lombardi’s first stint with the Browns in the early 1990s.

Will it happen? The jump to the NFL is always tempting for college coaches, especially college coaches with egos who were high school coaches just a handful of years ago. As is usually the pattern, the 48-year-old Malzahn could make the leap, test his craft, and settle back into a college job if things don’t work out…a pattern that has repeated itself on countless occasions.

As the hurry-up-no-huddle scheme gains ground in the NFL, it’ll be interesting to see how success breeds opportunity (and anxiety) down on the farm. Other candidates exist, but none with the resume that Malzahn brings of instant, add-water-and-win success energizing a Cleveland fanbase hungry for resurgence. (Though that resume is chocked full of its share of complete luck.)

42 thoughts on “Gus Malzahn to the Cleveland Browns”