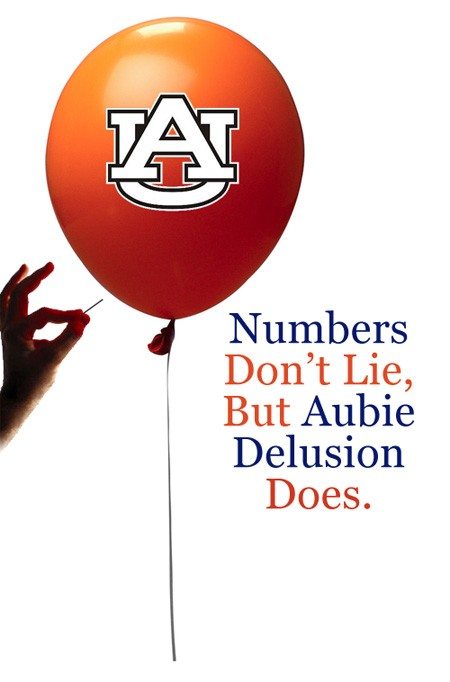 Numbers always tell the tale in the game of football. The very game itself is made up of numbers, from stats to the final score.

Following another shut out of an opponent this past Saturday, the Tide’s third of the season, Bama “offically” turns its focus to Auburn this week. And oh what a week it will be.

Don’t let the rankings fool you. If you like fool’s gold, climb aboard the Gus Bus. It’s chocked full of it in every seat. The Tigers are ranked #4 because perenial pretenders Baylor and Oregan did what Baylor and Oregon do down the stretch every season.

The Tigers are 10-1 in part because Mark Richt is soft and doesn’t cover details like “batting vs. swatting” a last gasp, desperation passes late in a game, and because Johnny Manziel happened to be hurt going into his game with the Tigers back on October 19.

The Aubie Koolaid is flowing, and their mouths are running. But take a break from the delusion for for just a second and look closer. Numbers don’t lie, and neither will the scoreboard Saturday night in Bryant-Denny East.

Auburn fans love to brag that their Tigers lead the SEC in rushing, and rank 2nd nationally in that category. Well, here are those national categories:

Notice anything there? Watched an Army, Navy or Georgia Tech game lately? Seen them attempt a forward pass? Teams tend to rank high in one category when that’s all they can do. Auburn has a prolific running game because their quarterback can’t throw a football in the Gulf of Mexico three times in a row. There’s a reason why Auburn ranks 104th overall in passing offense. But wait, we’re just getting started.

In an 11-game slate, the highest ranked defense Auburn has faced and beaten is Mississippi State’s unit, coming in at #41. At 42 in total defense, and 78th in scoring defense, there’s a reason why Georgia defenders didn’t know what to do late in a game.

Saturday Auburn will face the #3 total defense in the land, who ranks #1 in scoring defense, and tied for 2nd in red zone defense, and ranks 4th in rushing defense. The Crimson Tide has allowed just six touchdowns all year to teams not named Texas A&M.

In contrast, Auburn has failed to shut out anybody. Not Florida Atlantic. Not Arkansas State. Western Carolina. While Bama owns three, including two against SEC opponents (Arkansas and Ole Miss…both of whom Auburn had to outscore).

It’s easy to get caught up in the hype and hooplah of the Iron Bowl. Orange and blue candy cane wishes of our rival’s fans dance in their heads as they envision miracles like the one they saw against Georgia. But if that was a miracle, a win over Alabama this Saturday will be a mathmatical irregularity.

What about when Bama has the ball?
Well, let’s look at who the the Tide has beaten. In contrast to Auburn’s dipsy-doo, trickeroo offense, a unit that is the equivalent of a bar room sucker punch, Alabama has lined up and punched some good defenses in the mouth.

Who has Bama beaten? How about Virginia Tech, who we told you at the beginning of the season could be the best unit Bama would face. The Hokies rank 4th nationally. Then there is LSU, ranked 23rd…which Bama racked up 38 points against. The same team that whipped Auburn…despite a couple of late cosmetic scores, the Tigers were never really in that game.

And if the Tide needs to flip the field, how does #1 in the country in net punting set with you?

Auburn delusion: “But the crowd noise! The pressure! The Iron Bowl!” This week I actually had an Auburn friend tell me the crowd was going hurt Bama. These are all things the King of College Football, Nick Saban, calls clutter, and his players do too. This isn’t Bill Curry leading Bama into a hornets’ nest in 1989. It’s Nick Freaking Saban, with an 18-wheeler tanker truck full of Crimson insecticide.

Is there a program in America that has stared down and conquered more pressure-packed games of the century in the last five years than Alabama? That’s a rhetorical question; we both know the answer. All while many of these same Auburn players are just learning how to win, victims of blowouts all season long last year.

Simply put, Bama will make Auburn one-dimensional on offense, making little Cam beat them with his arm, limiting or even taking away the run. Then on offense, the Tide will expose an aggressive but spotty Auburn defense, taking what they give them, and a little bit more. Eleven games worth of numbers don’t lie, and neither will the outcome Saturday. Unless Alabama does much to help the Tigers, reservations in Atlanta for the next weekend are pretty safe.

UPDATED – 3:30pm
Just for giggles, here are the stats between the six common opponents between us and the barn:

Summary, Alabama is going to have to help Auburn greatly for the barn to win. But more likely, this can become a woodshed beating.