With spring practice a little over the halfway mark, yesterday’s scrimmage produced what you’d expect from a team in the midst of rebuilding. First, the good. AJ McCarron and back-up Blake Sims had good days, according to Alabama head coach Nick Saban. Monster runningback Derrick Henry got mention as well, saying “he has flashed at times of being a big, strong fast guy.” Saban said fellow early enrollee tightend OJ Howard is a good pass receiver, but is having to learn how to block.

But Saban talked of the need to improve on mental toughness and attention to detail to “sustain things” and get better as a team. This was the first scrimmage of the spring, with a second scrimmage and the A-Day game coming up. But there are a lot of holes to fill. I just hope Saban knows what he’s doing.

He did mention the progress of injured receivers Chris Black, Kenny Bell and DeAndrew White. Last season Black was injured in fall camp, Bell sustained a broken left leg against Auburn, and White injured his knee against Ole Miss. Issues related to them seems to be between their ears, and not necessarily physical.

“It’s a little bit of a work in progress for them psychologically to get the confidence they need that they’re not hurt. But they are doing a really good job.”

As for hitting, it apparently wasn’t a problem.

“It (hitting) wasn’t bad. There were some good hits out there. There was some aggressiveness. I just don’t think the overall intensity of the scrimmage was what I’d like for it to be. I think a lot of that was uncertainty for a lot of players who hadn’t been in this situation before. I think we will make improvement as a team from scrimmage one to scrimmage two.”

Last night Wichita State was thiiiis close to making it into Monday night’s national championship game. The Shockers may have the creepiest mascot in all of college sports (Shockers? Really?), but this team was fun to watch.

As a Bama fan who desperately wants to see the Crimson Tide take the next step as a basketball program, it’s frustrating to think where these two programs were just two years ago.

They’re known as a mid-major, but come on. They are a major. They are more major than Alabama at this point, making it further in the tourney than Bama ever has…dang, just making the tournament two years in a row for that matter.

Meanwhile, Bama was in the NIT again, and didn’t even make it back to New York. I know I’ve been a broken record on this (and by the way, what a shame that kids today have no idea what that phrase means), but when will Alabama basketball make any noise? If the Shockers can do it, why can’t we?

Thursday’s public memorial for Mal Moore in Coleman Colesium produced many memorable moments and quotes, but perhaps none were as telling as Alabama head coach Nick Saban’s thoughts on the Tide’s living legend.

“My happiest moment for Mal, with Mal, was when he won the Toner Award for athletic director of the year. It was so good to see Mal get recognized for all of his accomplishments, the legacy that was established here, all of the good work he did. He said something to me afterward, and he had a tear running down his cheek, which was really tough. He said, ‘You changed my life when you came here.’ I looked at him directly and said, ‘No, Mal, you changed my life. I’m a better coach, I’m a better person, I’m a better teacher for the lessons I’ve learned in being in partnership with you.'”

The game’s greatest living coach also peeled back the curtain a little more on the process of him coming to Alabama:

“When Mal came to Miami to interview us, we hadn’t agreed to get interviewed. Chuck Moore, who is a good friend of mine…we had him over the house at the lake in Georgia…Mal’s nephew, I would call him every now and then those last four or five weeks of the season in Miami. I’d say, ‘I’m interested in this and I’m thinking about going back to college. I don’t like this pro ball stuff.'”

Alabama is obviously proud to have Nick Saban has its head coach. But the memorial service shed light on the fact that Saban returns the sentiment, still elated to be here. After next season there will be more talk of job openings and contract offers, and there will be until he hangs it up for good. But the man every SEC fan fears has it like he likes it right where he is, and it’s because of a simple, honest man named Mal Moore that he does. Mal was an amazing teller of stories, often using them to communicate a truth. Somewhere in the process of recruiting Terry and Nick Saban, perhaps it was a story that changed the life of the the most dominant coach in modern college football history. The results of that story is still being written.

Speaking of story tellers, does anyone believe Jay Jacobs and company? As we pointed out yesterday, the denials are pouring in, but they don’t make sense.

Why woud so many independent members of the media all be saying the same thing? What do they have to gain? And between them and Jay Jacobs, who stands to gain/lose the most if their story isn’t believed? That’s an easy one.

Clearly, Auburn has become the O.J. Simpson of college football. Not because “The Juice” was an amazing runningback at USC. But because everyone in the world knew the man was guilty of killing his wife, but skated…for a while.

To this point, Auburn has continued to skate like Katerina Witt. But one gets the feeling Auburn’s white Ford Bronco has just about run out of interstate in this slow speed chase. 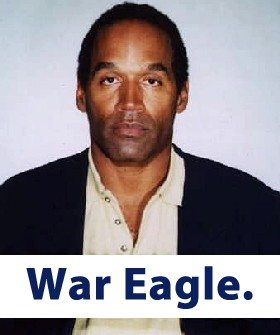 As Clay Travis put it, it seems the NCAA right now couldn’t convict Osama Bin Laden of terrorism. The organization appears inept, at least from the outside looking in. And this couldn’t come at a better time if you’re an Auburn fan. But then again, maybe appearances aren’t what they seem.

One thing is for sure: When the public sentiment starts turning on you, it’s hard to regain your innocence. That’s when you get little treats like this:

Look Auburn, we know you did it. We all know you did it. Everybody in the country now believes you’re guilty of the kind of things that would make SMU blush. And you’ve gotten by to this point. OJ became a national joke long before he became a convict, but one most certainly follows the other.

Even the most die hard Auburn fan knows deep down things don’t add up during that 2010 season. Either Auburn is the innocent victim of every talking head on the planet, casting them in the same light as 1980’s Miami and SMU, or those sirens you hear really are getting closer.

16 thoughts on “What does OJ Simpson and Auburn have in common? The answer is in your Sunday Cup of Coffee – 4/07/13”