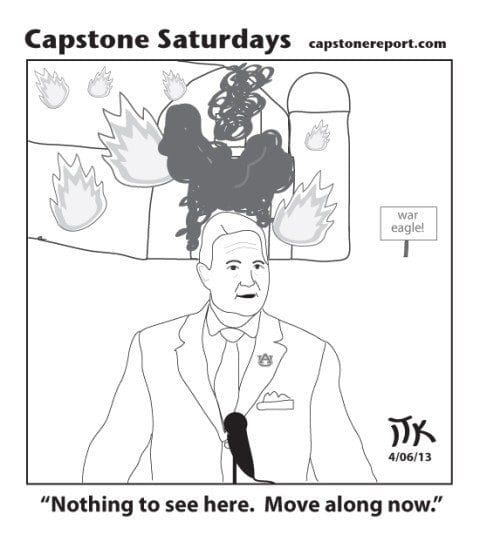 At this point only the most delusional Auburn fan…and there is an army of them…would believe there hasn’t been any funny business going on down on the farm…for years. Once again, the impartial national media…not Bama Magazine, Capstone Report or Tider Insider subscribers…has continued sniffing around the cow patties in Lee County, and once again, what’s coming up stinks to high heaven.

The Sporting News’ Matt Hayes wrote a scathing article about improprieties in Auburn stemming from an overall larger culture of cheating.

One jewel in the article, among many:

“Typically, it goes something like this: win a championship, recruiting improves exponentially, win more championships (see: Alabama). Unless, that is, the very foundation of what you do and who you are has rotted away long ago.

“Unless, that is, you stumble upon fools’ gold by landing an elite player — who turned in the greatest single season in the history of the game — and then hold on tight while he carries you to unthinkable heights.

Clay Travis has made putting Auburn under the microscope his personal hobby as of late, appealing to give the 2010 team full NCAA immunity to find out what was really going down as they cheated their arses off that season.

Another gem, from his article: “Even 1980’s Miami players are like, ‘Damn, y’all need to chill at Auburn.'”

One gem, among many:

“The Magazine/”E:60″ investigation revealed that while Chizik and Auburn athletic director Jay Jacobs were aware of the football team’s 12 positive tests for synthetic marijuana, they kept the results secret, even from the parents of the players.”

Of course, the most infamous of works casting a negative shadow on the Plains began with Selena Roberts’ article, “Auburn’s Tainted Title: Victims, Violations and Vendettas for Glory”

Of course, Auburn’s Jay Jacobs and former head coach Gene Chizik have offered denials, as have a few of the players quoted in the report by Roberts. And the Auburn spinmeisters have been hard at work, dissecting the words of those offering a disparraging view of the Auburn Athletic Department.

But sooner or later, Auburn fan, you have to ask yourself why. Why are so many pointing fingers toward your lovliest village, two years removed from your first taste of glory in 50 years…fresh off another average year in 2011 and an absolute abomination of a season in 2012? You can’t say it’s Crimson jealousy…heck, Bama has shelved three BCS National Championships in the same era.

Auburn fan, you have to listen beyond the PR spin and sports relations talking points doled out to in-state media outlets like Halloween candy. Sadly, these latest points of contention are just the tip of the iceberg for a program that’s broken beyond repair. What’s wrong with your program, how do you fix it, and if it doesn’t bother you that all this is going on, who really has the problem?

After all, it’s them, not you. Right? Everybody…all the independent voices around the country are the ones lying, not Jacobs and company. Right?

4 thoughts on “Auburn burns as the denials mount”